‘We’re just going to do our best’: As COVID-19 shuts the world down, Bruins face challenge of staying in game-shape 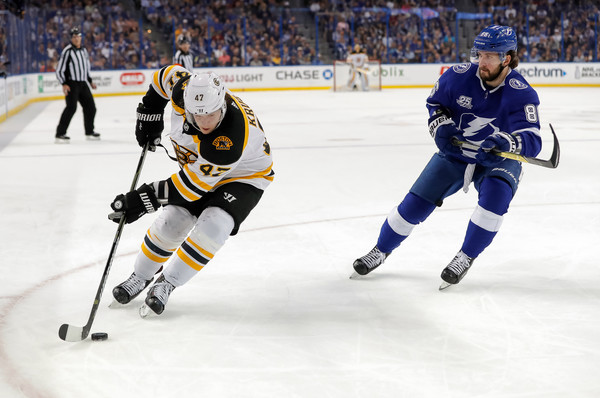 The biggest NHL-related issue on people’s minds with this COVID-19 shutdown has revolved around when the season might resume. Will the league complete the regular season? Will they shorten the playoffs? Where will the games be played? Will fans be allowed in?

All are legitimate concerns. For the Bruins, it’s even more bitter, as they’ve been on a Stanley Cup revenge tour since Day 1 and are currently on track to take home the Presidents’ Trophy.

But there’s a bigger issue all NHL players are facing right now: staying in game-shape.

“No one’s training the way that they normally do,” Torey Krug said Wednesday. “If you’re considering bye weeks for example, most guys go on a vacation but they have a gym at the hotel and can accommodate the training programs that they’re on. This has been longer than that and no one knows what each other’s doing, but we’re just going to do our best.”

The last time the Bruins suited up for a game was exactly 31 days ago in a 2-0 win over the Philadelphia Flyers on March 10. Since then, the league has suspended its season. All non-essential businesses are closed. That includes gyms. Sweeney has placed a “strict policy” on his players against going out and being in public.

It’s been mostly about at-home, bodyweight workouts for Krug. The app Peloton, orders from the Bruins and his own personal trainer’s advice have influenced how No. 47 works out at his family’s place in Michigan.

“These are all great workouts,” Krug said. “What’s good about that is everyone has different things they have available to them. You can make great workouts in any part of your home.”

Pushups, pull ups, wall sits and planks are all great movements to strengthen different muscles in the body. But there is one primary area of hockey extremely difficult to duplicate: skating. And with rinks closed across the country, finding ice time is virtually impossible.

“Absolutely nothing,” Krug said when asked if anything off-ice could come close to skating. “The reality of it is even rollerblading, it mimics the motion but you don’t get the build-up of lactic acid and having to deal with your groin and your hip motion when you’re digging into the ice and trying to stop and start. That’s a big part of it.”

No matter how much one runs and no matter their conditioning, almost nothing can prime a player for the ice quite like skating. With the way in which the legs move, as well as wearing loads of equipment and doing so all at very fast speeds, skating is an incredibly uncommon movement.

“Guys could be doing a slide board at home if they had them,” GM Don Sweeney said Friday. “In certain exercises, you can certainly facilitate the way to get back on the ice. But you’re off, now we’ve been off for a month and who knows when we’re getting back on.”

Despite there being almost nothing that fully mirrors skating off the ice, there are other movements players can be doing to prepare their legs while the rinks remained locked.

Joe Zizza, co-founder of skating clinic and school Power Edge Hockey in Massachusetts, explains that 40-yard sprints in sets of five are a great starting point for staying in game-shape.

“That’s how you’ll keep your quadriceps and your speed up to where you need it to be when you come back to play,” Zizza said.

Another action suggested by Zizza is rollerblading because of the side-to-side strides. Lunges, burpees and squats were also recommendations. An area where Sweeney and the skating expert would certainly agree on: the slide board.

“If they just do that slide board every single day, that’s how you can mimic your stride and skating all the time,” Zizza said. “You want to stay in shape and create muscle memory. You don’t want to lose your muscle memory in the way you skate. When you run, you kick your legs behind you. In hockey, you never use your hamstrings. You only use your quadriceps and the only way you can make sure you maintain the muscle memory is by doing those side pushes everyday on your rollerblades and on a slide board.”

Still, even with those movements, it’s not close enough to skating at the highest level of hockey and preparing for all of the other elements as well.

“Riding a peloton or a bike to limit shift lengths — that all helps and it’s great, but there’s absolutely nothing you can do to prepare for the ins and outs of a shift or the physicality of it,” Krug said. “Not only are you trying to mimic the skating motion, there’s no way you can train for going into the corner with a guy who’s 6-foot-2, 210 lbs and trying to out-battle him and get the puck and skate away from him.

“There’s so many things we can try to do as individuals, but the reality is there’s nothing to get us as close as possible into playing shape unless we go through some sort of mini training camp once we get back to this thing.”

Krug brings up one of the most widely agreed upon parts of a return to hockey — if the season is to resume, some sort of training camp must come before it to get players close to feeling as good as they did a month ago.

What a burst of speed from Jake DeBrusk #NHLBruins pic.twitter.com/0hLi7Qq1NF

“That’s where that slow ramp up is going to have to take place,” Sweeney said. “There’s no way we’re going back to the old days where you can jump on in double sessions — that’s not what this is going to be about. You can’t expect players to go from zero to 180. We’re going to have to realize it has to be incremental steps. Maybe it just gets back where we’ll open up our buildings and maybe guys are able to get on the ice in a relaxed way where they’re just getting their feel in their legs back to that skating motion which is so unique.”

Typically, training camp lasts almost a full month and usually includes six preseason games. In a scenario like this one, the league may not have a full month to let players warm up for the grind of what would be the rest of the remaining portion of the regular season and playoffs.

“You’re just going to have to move the needle slowly and the expectations will have to reset,” Sweeney said. “I think that’s where the general managers and everybody has to be very realistic in terms of what we have to do to make sure our players remain healthy.

“We have to make sure that it’s standardized to begin with around the league as to what we have to do to make sure these players will be healthy and incrementally moved along to be in the shape they’re capable of getting to play at a high level. When you do resume play, it’ll be back at a high level with the hope you’re entering into the Stanley Cup playoffs in short fashion, which we know the intensity goes up ten-fold.”

Sweeney mentions a key word there: hope. The league hopes it can continue the season. At this point, it is certainly no guarantee.