What can Alex Cora do to wake up the sinking Red Sox? 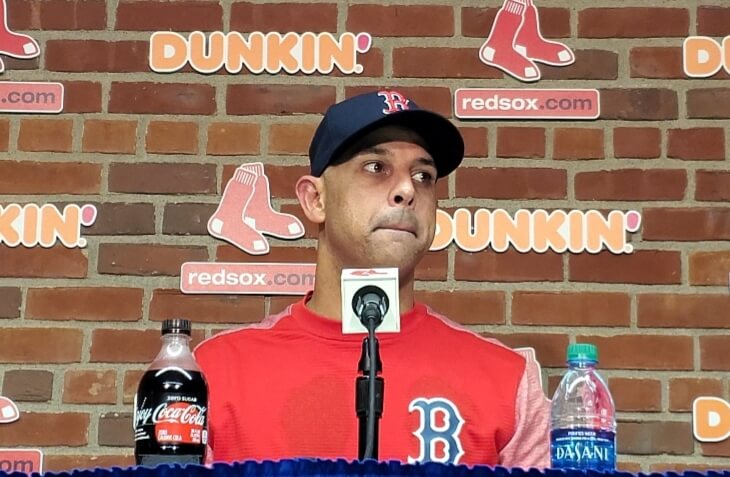 BOSTON — The chances to prove the Red Sox are worthy title defenders are running out – and fast.

So what can their manager, who pushed every conceivable right button in a record-setting run to a 2018 World Series title do to turn things around?

It’s a question that has been taking up a lot of Alex Cora’s time lately.

Time for Cora to remind his team that’s it’s Aug. 2 and they’re starting a 4-game series in the Bronx against the Yankees. What will the specific message of urgency be at this point?

“We’ll see. I’ll make it up on the way to New York,” Cora said. “I think it’s important, not because of what people think just because of what’s coming now. It’s August 2 whenever we talk. It’s the reality of where we’re at. They know but it’s just a reminder. And we do that most of the time but probably in a different setup.”

Cora was asked if these meetings with the team have been commonplace in his second year at the helm.

“Not common at all (though) we meet on a daily basis to go over pitchers,” Cora answered. “I use that sometimes to send a message that we need to do this better or we’re doing this great and just keep going. But not too often.”

When was the last time he delivered one of those messages?

“I can’t remember. I’ve got a bad memory,” Cora said with a wink.

Right now, there’s not a lot to laugh about. The Red Sox head to New York having just about blown any realistic shot of catching New York for the division, and that will be all but cemented if they don’t win at least three of the four. But the wild card is now getting dicier by the day. Cleveland and Oakland sit atop that race for the two wild card spots. Minnesota could slip but right now Tampa Bay, as they just showed for the last three days, is a much stronger contender in third place than the Red Sox.

Following their latest no-show against the Rays at Fenway Thursday night, a 9-4 loss to the Rays, Cora was left to try and explain why his team looks so lethargic.

“We’ve got to be better,” Cora said after the club’s fourth straight loss on the heels of three consecutive wins over the Yankees to open the homestand. “The effort has to be there every day. You’re going to go through slumps, through struggles, but there’s a few things you can control and it’s the effort. There are a few things that, effort-wise, it didn’t look good.”

The inability of Sandy Leon to catch a breaking ball from Andrew Cashner in a 3-run Rays second inning was one moment that didn’t look good after a 2-run moonshot by Xander Bogaerts gave the Red Sox a 2-1 lead in the first. There was an odd visit from Cora to the mound to visit Cashner with two outs in the fifth after Cashner fielded a comebacker threw to first to get the batter while the not-so fleet-footed Ji-Man Choi rambled to second in scoring position. It was the smart play but still Cora wanted to get a message across.

If there’s one message above all others that Cora wants to convey it’s to stop issuing free passes, which Cashner did five times Thursday. Five walks is a way to tick off any manager. Giving up three runs twice after your best hitter homers the inning before is another.

“It is concerning,” Cora said of a pitching staff that was beaten up by Tampa Bay. “I’ve been talking about this the whole time. We need to get better and it sounds like I’ve said the same thing for 100 days. We trust the group, we trust these guys, but we have to execute. We can talk about adjustments, attacking guys, but at the end we have to go out and do it.”

When the Red Sox clobbered the Yankees Saturday for their third straight win, it looked for all the world that the pitching-poor Yankees were the ones who were leaking oil fast and that the Red Sox were poised to add one more arm and make a race to the finish for the AL East, forgetting about the wild card.

Then the Red Sox pitching staff, starting with Chris Sale Sunday night, ran the team into a ditch. Sale allowed five runs in a 9-6 loss Sunday. David Price four on Tuesday and couldn’t hold a 3-1 lead in a 6-5 loss. Rick Porcello was hammered for three homers Wednesday in an 8-5 set back and Andrew Cashner, the lone Dave Dombrowski acquisition, was tagged for seven runs on five walks Thursday.

“It started as a great homestand and it didn’t finish that way,” Cora added. “We’ve got a big challenge coming up this weekend and if we’re going to be involved in whatever talk for the playoffs, it better start [Friday].”

I asked Cora before Thursday’s game about his relationship with Steve Langone, the club’s manager of advanced scouting. Cora delivered some interesting perspective about not needing to see the game the same way but being on the same page in approach when players and coaches leave the clubhouse for the field.

“This game, a lot people think it’s black and white. It’s not,” Cora told me. “The way I see the game, I might feel I’m right (about strategy) but your opinion is your opinion, and they see the game that way. That’s the beauty of the game. I go back to (World Series Game 4) last year in LA when (Rich) Hill and Eduardo (Rodriguez) started. They took him out early and I took him out late. It just happened that we came back and we won. If not, the narrative was going to be different, and that’s the beauty of this game.

“There’s no right or wrong. At the end, I can make a mistake in the eyes of people and we win the game and really doesn’t matter. Or I might make the right move in the eyes of people and we lose and then it’s on me. That’s why I love this. There’s different opinions and at the end, the most important thing is that when we leave that room, we’re on the same page. This is what we’re going to do against this team. And that’s the cool part of it.”

Right now, Cora needs to be sure everyone is on the same page entering Yankee Stadium if they are going to go about the monumental task of saving the sinking ship that is the 2019 Red Sox.