What is the future of David Backes with the Bruins? 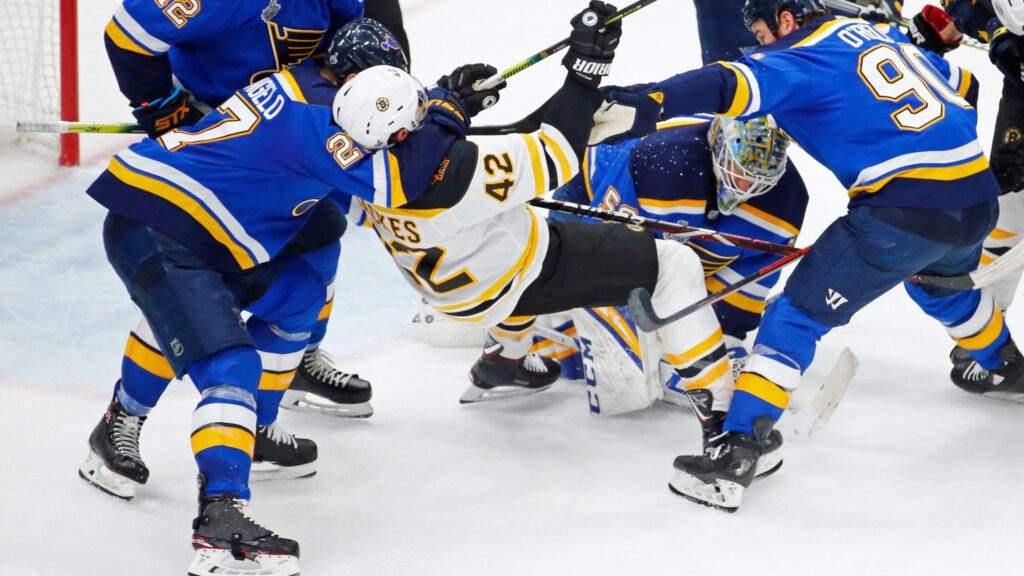 BRIGHTON – When David Backes strolled to his locker to face the media on Friday’s break up day, there was a different type of sadness and regret expressed through his words and facial expressions.

And rightfully so — not only did Backes watch his former team, the St. Louis Blues, hoist the Stanley Cup before he did, but he watched as a healthy scratch for the last three games of the close, intense seven-game series.

“I guess maybe a culmination of six, seven days before that of uncertainty and feelings of possibilities, potential opportunities — all those types of things,” Backes said of his thoughts leading up to and following Game 7. “Missed opportunities. It’s a swirl and whirlwind of emotions that I haven’t fully gripped and I don’t know that I will in the near future. I don’t know if my situation, all of the extra layers, helps, hurts. So yeah, that’s my jumble of random thoughts for the day.”

Ironically enough, they aren’t random. The ending to Backes’ season sums up his entire time as a Bruin: his leadership skills are important and his physical presence is needed from time to time but at the end of the day, he doesn’t really have a spot on any line.

The odd man out.

The 2019 Stanley Cup Final was a slap in the face for Backes. On July 1, 2016, Backes took a leap of faith when he left the Blues to sign with the Bruins because he believed his best chance at a Stanley Cup was in Boston.

It’s been a rollercoaster ride ever since. The 35-year-old power forward’s gotten slower as the game has gotten faster. His point totals started at 38 in his first season, then 33 and then 20 this past season. For the first time in his career, he found himself healthy scratched at points during the 2018-19 campaign.

Backes sat on the ninth floor for nine of the Bruins’ 24 playoff games. When he was in the lineup, mostly on the second line, he only contributed five points. Bruce Cassidy often chopped him from the line-rotation in the third period.

His future looms as one of the biggest question marks surrounding the Bruins’ offseason.

“I have not gotten that far,” said Backes of considering his future. “I had my exit meeting. They’re smart guys — they know everything is still pretty raw. 48 hours after the end result and to dive too deep into next steps I think we didn’t get there at least in our meetings. I don’t know what that looks like. Probably I have a better answer for you when I had more control of my future but I’m in flux at the moment and I guess you’ve got to trust the bigger plan and that’s where I’m at.”

The 35-year-old has two years remaining on his 5 year/$30 million contract he signed back in July of 2016. Both seasons carry cap hits of $6 million — that’s a lot for a player who was healthy scratched for the final three games of the Stanley Cup Final.

With all that movement in and out of the lineup, that had to have hurt Backes’ confidence in the Bruins’ decision-makers, right?

“I’m not naive,” said Backes. “I think if you got a chance to win a Stanley Cup, you put your best lineup out there and try to win the game and I wasn’t one of those guys. It’s one of the things that digesting, I don’t experience the loss per say first hand. I don’t sit out there and say I could’ve done more in Game 7 and I was shaking my pom poms as hard as I could. You don’t score any goals shaking pom poms or whatever so I guess that is conflicting me a bit.

“But I don’t know where that leads. I wish I had answers for you but I don’t. Those are the things I cannot control and I don’t necessarily try to. Do they take up some headspace? Sure. But those are in someone else’s hands.”

They sure are are in someone else’s hands and the general feeling is those hands — the Bruins — will buy him out. It’s doubtful that any team would take Backes and his contract.

Despite the missed playing time and uncertainty for next season, Backes still wants to be in Boston.

“I know what my contract says for trade team list and what that looks like,” said Backes. “Obviously if I’m going somewhere else, which I hope not to be. This is a hell of a group in here — a great group of guys, a great group of wives and there’s a reason we got so far in these playoffs. It’s cause we care about each other, and lean on each other and because you want to do it for the guy next to you.

“I believe this is a winning pedigree and winning culture in here. We were one game away from winning the Stanley Cup which is one of those last goals on my list before my career is over so I think this is a good place to accomplish that. Whether or not there’s another crack for me I truly don’t know.”

When Backes’ media availability ended, he immediately separated himself from the scrum, picked up his hockey bag and walked out of the dressing room.