What Makes Brian Callahan So Invaluable To Zac Taylor and Bengals 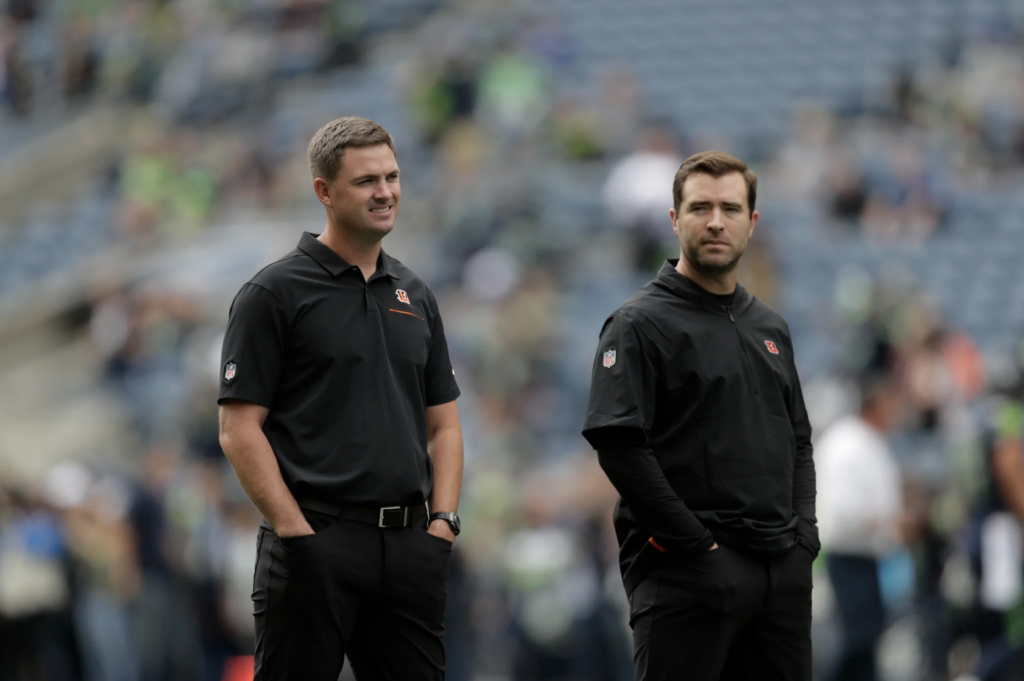 CINCINNATI — Calling plays in an NFL game isn’t a one-man job. It hasn’t been for a long time. Look no further than the Bengals to understand the unique relationship between a pair of coaches with Super Bowl experience on their resume.

Head coach Zac Taylor has the final call on gamedays but what’s truly important to understand is the process that goes into every play, the voices in the room that have real input and the orchestration that figures into the compilation of all the choices on the menu that Taylor has in his hands on the sidelines.

Brian Callahan has the title of offensive coordinator and, with the Bengals, that’s literally his job. On many teams, the head coach entrusts the coordinator with designing and calling the plays.

But in Cincinnati, where the head coach has an extensive background in working with offenses at the college and pro level, Taylor prefers to pull the trigger during the game.

So then, what exactly does Callahan do for Taylor?

“The nice thing about having a head coach that calls the plays, they still have to do all the things that head coaches have to,” Callahan told me. “Roster management and he still has to worry about anything else that comes up, defense, special teams. Those things are all things that he has to think about during the week. So, he relies on me specifically to advance everything else. So, offensively I move forward with the plan and then he catches up as he has time.”

Asked Brian Callahan what he sees as the biggest potential areas of improvement in Joe Burrow and #Bengals O. “I still think we’re looking for improvement down the field… I do think our intermediate game is as good as anyone’s in football.” pic.twitter.com/As5Uo7t65I

Both Callahan and Taylor have been offensive coaches on Super Bowl staffs, Callahan in 2013 and 2015 (Broncos) and Taylor 2018 (Rams).

“He might not be in every meeting with the staff, I’ll run most of those they’ll catch up with whatever we do,” Callahan adds. “Whatever we’ve got to catch up on. I do a lot of previewing of each situation. So, I’ll put out a list of first, second down passes together, and it’s usually a really long list of things, and then I’ll get together on Tuesday night and take an hour and a half to go through and cut that list. He says I like these things here. I have these ideas. I’m going to put in here. We just kind of flow through the conversation.”

“He helps balance things when I’m not around and I’m doing head coach things, and Frank (Pollack) is doing the run game. He does a good job of meshing that as well and making sure the communication is great,” Taylor said of the invaluable service Callahan provides. “I could probably talk for hours about the value that Brian has to our team because it is tremendous. And I think the players see that, how smart he is.

“He’s been around some of the most successful offenses in the history of football and he’s seen some of the all-time greats do it. He knows what the standard should be and what it should look like. When he communicates with the group, it always hits the nail on the head because he’s been there, done that. It’s where we want to be, and he does an outstanding job for us.”

In speaking with both for this look behind the curtain at what goes into play-calling, it’s clear that the relationship works well. The results, as both will admit, haven’t always been ideal but it’s the process that must be refined and perfected before the engine starts firing at optimum RPMs.

That’s what the first two seasons have been about for Taylor and Callahan, who have known each other a long time.

“We think the same and what I mean by that is I could disappear for a few hours doing head coach things and he really just keeps things smooth and on track and by the time I get back it’s not a different thought process of what I would’ve followed myself,” Taylor told me this week. “And that’s from our interactions over three years, that’s from our interactions of 10 years of phone calls before that because we never worked together before that. Working summer camps together and talking ball and talking scheme.”

When Taylor was putting together his staff after he was hired in January of 2019, he knew who one of his targeted hires would be.

Callahan had just completed a season as quarterbacks coach with the Oakland Raiders and already had a Super Bowl ring with the 2015 Denver Broncos, working with two of the most brilliant minds in NFL offense, Gary Kubiak and Peyton Manning. And with Manning in particular, he knew one thing as the leader of the offense on the field stood above all else.

“Preparations. His preparation was so maniacal,” Callahan told me. “So detailed as a quarterback, he has to prepare just like the coordinator does, just like the play caller does. (He would) always think about the game plan, how we’re trying to attack, what we’re trying to attack, how we’re going to deploy our people against whatever they show us. And it’s a really intense way of going about it. The way he went about his business and the urgency of how you had to attack all those small things and make sure you’re all on the same page all the time.”

But Taylor and Callahan understand clearly that being on the same page doesn’t mean you agree all the time.

“As we watch tape, that’s not to say we don’t disagree,” Callahan said. “We have plenty of times where I like to play and I’ll stand up and fight for it, getting some idea and then it’ll work in the game. And then they say, ‘good job’ and vice versa out the plays that I don’t like it. He has that we may come up with a but whenever we’re done and we leave the room on the same page with what we’re going to do, for that meat for the game, and how we’re going to go attack.”

When Peyton Manning was leading the record-breaking Broncos offense from 2012-2015, Callahan was an offensive assistant to Kubiak and the Hall of Fame quarterback. Taylor wasn’t afraid to tap into Callahan’s access to some of the greatest offensive minds in the history of the game.

“‘Why did Peyton Manning do this?’ I remember texting him that all the time in 2014 or 2013,” Taylor said. “(Callahan) is not afraid to tell me what he thinks if I’m screwed up in some way or if we should be doing things differently, which you have to have in this profession. There can’t just be people telling you that you do a good job and everything’s great.”

During the weekly meetings, every coach has the option to sell their unit, whether it’s run-game coordinator Frank Pollack or wide receivers coach Troy Walters.

“It’ll be anything to the red zone and third down,” Callahan said. “Each one of our coaches has an area they’re responsible for, so they can pitch. Third down, Walters does Red Zone, whoever it is, we preview that area. We go through and we build the list, and the idea is to have a list of things to choose from and then Zac and I go through and then cut it down and make sure we we’re fine, whatever it is we’re going to run. The good thing is that Zac and I see football very similarly. We see a lot of the same.

“Ultimately when you get to game day, you’ve got a pretty good idea of how things are going to come off your call sheet for the most part. It’s not a whole lot of guessing when we get to game day. We’re all pretty much in lockstep with how we see it.”

“You need people that can balance that for you. Brian absolutely does that,” Taylor said. “Maybe that comes from being a son of a coach, maybe that’s just his personality, whatever it is, he’s just got the right tone about him to where he makes sure we’re always doing things the right way.”

Callahan’s father, of course, is Bill Callahan, someone with his own extensive and successful pedigree in the game. Bill Callahan, who serves now as the offensive line coach in Cleveland, coached quarterback Rich Gannon and the Oakland Raiders to their last Super Bowl in 2002.

“There’s probably no one has had a bigger impact outside (the game),” the younger Callahan told me. “He’s the most impactful person in my career, just outside of being my father, just as my just as a mentor and he’s seen so much. He’s coached for so long. He’s been a head coach. He’s called plays, he’s been in college (Nebraska). He’s done it all at a really high level for a long time.

“And the things that he says, the advice, he gives the perspective that he has on things where I might get real mad about something and I might be all bent out of shape about how something went that game and he just goes, ‘mad for, what? Is that going to do to help me? What did you what do you do to fix it? How do you fix the problem?’”

Those are the words Callahan is most likely to apply now, knowing everything he does over his first two seasons in Cincinnati. It’s not so much about what went wrong but making adjustments in games and move forward. It’s making adjustments week to week so your offense is playing its best and most meaningful football after Thanksgiving.

If you think father and son talk shop a lot, think again. Besides the obvious that they’re on separate sides of a very intense AFC North rivalry, father and son keep their conversations to life’s lessons, not strategy.

“He’s always been a huge, huge influence even till now, we don’t talk about each other’s teams very often, try to keep those things out of our conversations, but just general football, career advice, wisdom, all those things,” the younger Callahan said. “Huge, huge, huge role in my development, as a coach and helped me get to where I’m at and will continue to help me for all the years that I do this. I’m sure.”