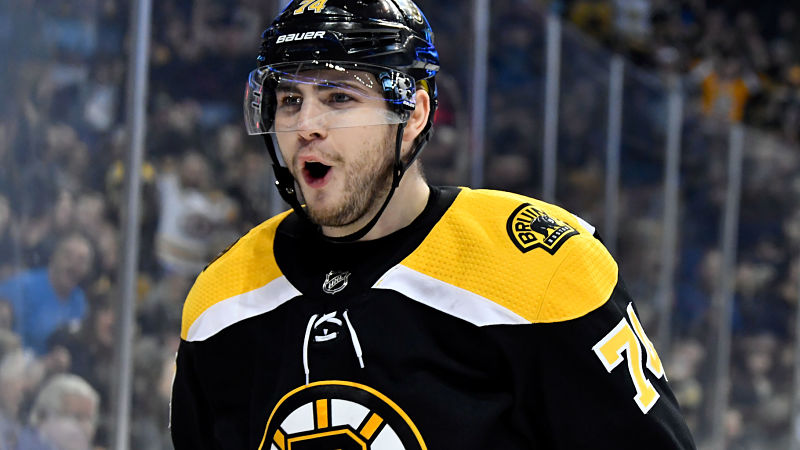 Winning a Stanley Cup in the midst of a global pandemic isn’t the only tough task the Bruins will face in the coming months.

The league’s salary cap is expected to stay at $81.5 million for the foreseeable future, as COVID-19 has taken a sledgehammer to the NHL’s plans for increasing the cap. For Boston, this means a tougher time re-signing their unrestricted (and restricted!) free agents this “offseason”.

All of the attention is on UFA-to-be Torey Krug, and rightfully so — the dynamic, offensive d-man is projected to make the most money and is one of the best power play quarterbacks in the league. Some guess he’ll pull in $7.5 million per season. Others predict Krug to cash in even more.

The Bruins have just under $18 million in cap space this upcoming offseason, according to CapFriendly. With that, they’ll look to find a way to re-sign Krug, as well as Zdeno Chara. It’s hard to imagine they bring back UFA-to-be Joakim Nordstrom. On the RFA side of things, the most interesting case will certainly be Jake DeBrusk, and he seems to be the other deal most overlooked.

That was until this week.

“I don’t really consider that at this point,” Valette said. “Will it play into it? Maybe. I would hope not. That’s not typically how I would approach that. The one thing I would add to Jake is that you want to look at his playoff performance and what he’s done in the playoffs in big games. The Toronto series from a couple of years ago, for example. He’s a big-game performer and he’s been a top-six forward almost from the moment he stepping into the National Hockey League.

“Boston certainly has some internal things that they like to look at, but I’m going to try not to look at that.”

This answer came after Valette proclaimed DeBrusk to be a $6 million-a-year forward.

Let’s unpack all of this.

For one, the Bruins have that limited cap space to re-sign Krug, Chara, DeBrusk, Matt Grzelcyk and Anders Bjork. That’s already an extremely tight window to sign those five players, especially considering Krug could take up nearly half of that space.

If Krug were to get $8 million per year and DeBrusk were to get $6 million, that would leave a little less than $4 million in space for Chara, Grzelcyk and Bjork. As good as Don Sweeney is at doing cap cartwheels, even he probably wouldn’t be able to execute such precision. From a salary cap perspective, $6 million per season for DeBrusk doesn’t make sense for the Bruins. Best of luck to Valette who isn’t too fond of the whole hometown discount idea.

And then there’s the performance aspect of this. How do players around DeBrusk’s production level, who are also wingers and close in age, make out in the dollars department?

Since the start of 2017-18, DeBrusk’s 83 total 5-on-5 points rank 123rd among all forwards who’ve played 1500 total minutes or more. That point total is extremely solid and indicative of a steady, second line presence.

But after an analysis of those around that number, DeBrusk’s value is not that of a $6 million AAV.

Of those seven players, Mantha and Bertuzzi will both be RFAs this offseason. Surely DeBrusk will look to those two to help set his market. Bertuzzi is coming off a cap hit of $1.4 million per season, while Mantha was a bit more, sitting at a $3.3 million AAV for the past two seasons. Both will certainly request a pay raise from the Red Wings, however it’s hard to imagine them breaking the $6 million-a-year threshold given the tight salary cap, although Bertuzzi may come close. Still, both have yielded higher 5-on-5 production than DeBrusk in the last three seasons.

Then there’s Bjorkstrand, Rust, Buchnevich and Beauvillier. We’ll save the discussion of Boeser for later.

Boeser’s an interesting case. The Bruins actually could’ve selected Boeser in the 2015 NHL Draft. Remember that time the Bruins had three straight first round selections at No. 13, 14 and 15? Yeah, that was that Draft. And remember how the next three picks after the Bruins left the stage were Mathew Barzal, Kyle Connor and Thomas Chabot — all solid, NHL regulars? Yup. That was 2015.

The Canucks snatched Boeser at No. 23 and he’s been a home run out in Vancouver. At all strengths, Boeser’s put up point totals of 55, 56 and 45 in his first three seasons. The Canucks rewarded him with a three-year, $17.625 million deal prior to this past season. For those who aren’t top tier at math, that’s an AAV of $5.875 million. He’s a first line mainstay in Vancouver and looks to be a cornerstone there for the distant future.

Given Boeser’s success, it’s hard to imagine DeBrusk surpassing an AAV of $5.875 million.

As good as DeBrusk has been through his three full seasons in Boston, it hasn’t come without some inconsistency. He ended this past regular season with one point in his final 14 games. He began this season with one goal in his first 12 games. During the 2018-19 season, he went a month without scoring. Ironically enough, he followed that stretch up with nine goals and 16 points in his next 12 games.

My point: DeBrusk is still young. He goes through highs and lows. He’s got legitimate potential and Boston surely sees him as a serious part of their future over the next 10+ years. But that doesn’t mean he’s worth $6 million per season…yet.

DeBrusk’s next deal should sit between $3 and $4.5 million per year for three seasons. Anything more than that is a reach right now and given Boston’s cap situation, it doesn’t seem all that realistic.