Signing the 24-year-old free safety won't be cheap but it would be worth it. 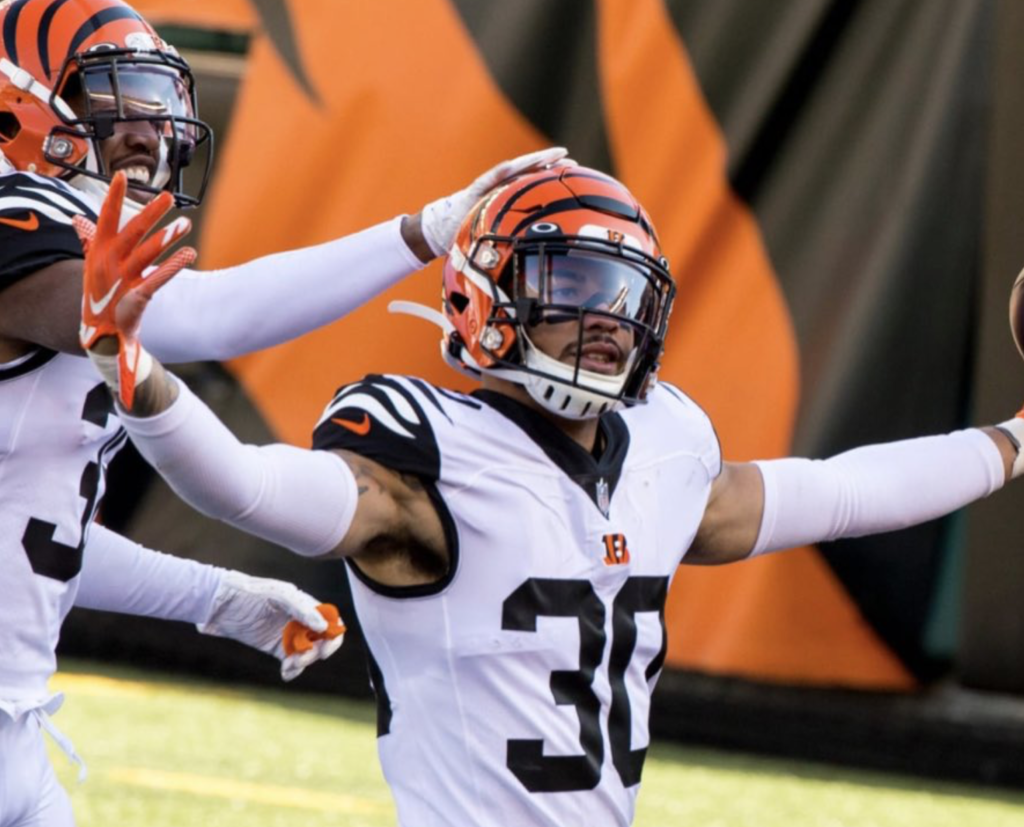 CINCINNATI – When a teammate takes the bold step of publicly acting as an agent for you in contract negotiations, you know you have a tight locker room.

That’s apparently the case with these Bengals.

Bengals slot corner Mike Hilton, who came over from the Steelers in the offseason to help change the culture and the expectation of the Bengals room, spoke volumes Wednesday when he capped off his seven-minute availability with reporters by uttering three words that will reverberate throughout the team.

With those three simple words, Hilton verbalized what most every Bengals fan is thinking. Jesse Bates is the heart and soul – and quarterback – of the Bengals defense. For Hilton, who played on perennial playoff teams with the Steelers, to come out and speak that strongly for a 24-year-old teammate in the secondary points to how valuable those on the backend of a highly efficient and well performing defense view him.

“It’s awesome they support their teammates,” Bengals coach Zac Taylor affirmed Wednesday. “That’s one glimpse of our locker room. They like playing with each other, they want to continue to play with each other. They’re going to support each other. That’s a positive thing.”

Bates, as everyone who follows the Stripes knows, is more than a great presence on the backend of the defense. He’s a leader and a captain at the ripe old age of 24.

“He’s playing pissed off,” noted Larry Ogunjobi, who himself signed a one-year, $6.4 million deal with the Bengals in March. “He’s on a one-year deal.”

“He has been a tremendous leader for us and a captain,” Taylor added. “He has always been a mature guy, I got here during his second year, and you see him continue to professionally mature. The game has slowed down for him, he understands his role as a leader, what that means and what that looks like. Jessie has been really fun to watch him continue to evolve as a football player and a leader. He has done a great job for us.”

The on-field value is there for the team. The off-field leadership is there for his teammates. Now will the organization step up and do what everyone coming into this season assumed would be a foregone conclusion – extend him to a multi-year deal and send the message to the rest of the team?

“I guess I haven’t done enough yet to be considered one of the top safeties in this league,” Bates said in camp, just three weeks before the season opener. “I think this will probably be my last time that I speak on the contract just because I think it can get a little messy as far as thinking about it too much.”

That angst didn’t keep Bates from joining in on the overtime tackle on Dalvin Cook that led to Germaine Pratt’s fumble recovery and Evan McPherson’s kick at the gun in the 27-24 win in Week 1.

Some factors have changed the course and climate of negotiations. Bates changed agents in the offseason, hiring David Mulugheta of Athletes First. Mulugheta has negotiated deals for superstar corner Jalen Ramsey and safety Budda Baker, who inked a four-year, $59 million with the Cardinals in Aug. 2020. Baker, like Bates, was 24 when he was negotiating with Arizona. For Baker, he received a $10 million signing bonus and $33.1 million guaranteed.

Bates said before camp started that he was eager to get a deal done before the season to get the distraction out of the way and join with the newly extended Sam Hubbard as a piece of the foundation on defense.

“I’m super eager to get a deal done. Obviously, I want to be here,” Bates said. “I think my mom’s a little bit more eager, just because she wants to know whether she’s gonna move to Cincinnati maybe. So, you know, that’s ongoing talk that I’m very excited about. ”

Hilton, Vonn Bell, Chido Awuzie and Trae Waynes are all veterans in that Bengals room watching this very closely. Talks appear dormant for now, with the Bengals watching closely to see if Bates warrants the kind of deal that Baker won from the Cardinals.

The Bengals can always franchise Bates for 2022 but that’s not a way to impress the locker room.

While Bates is not appearing all over the stat sheet this season, he is still all over the field and putting his body at risk, as the neck strain suffered against Jacksonville and the hit that knocked the wind out of him against Green Bay in overtime clearly show.

Bates is a smart and beloved player in the locker room. Now would be a good time to invest in one of the more important pieces of the Bengals’ future and send a message that the organization is committed to building unity and strength within.