Why Bill Belichick Passed on Quarterback & Receiver in 2020 NFL Draft 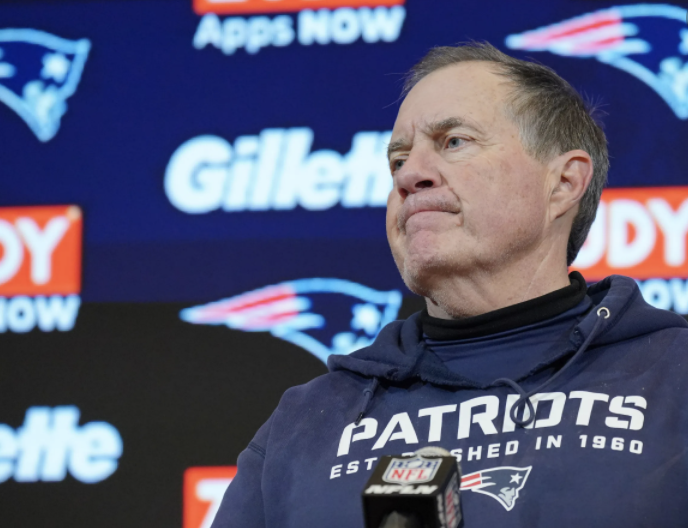 There’s a cliché that has evolved over the Patriots’ dynasty of the last 20 years: In Bill we trust.

Well, after the virtual 2020 NFL Draft was completed on Saturday, it’s pretty apparent, Bill Belichick trusts what he has in two key areas of his offense.

Belichick did not draft a quarterback or a receiver with any of their 10 picks over seven rounds and three days.

He selected two defensive edge players, one safety, three offensive linemen, two tight ends, one linebacker and a kicker. Not drafting a quarterback would’ve made the departed Tom Brady happy. Not taking a wide receiver probably would’ve had him demanding a trade on Instagram.

There was plenty of prognosticators out there who felt it was a near certainty coming into this draft that the Patriots would surely take advantage of one of the deepest wide receiver classes in recent memory and add to a group that is either very young (N’Keal Harry, Jakobi Meyers), getting older (Julian Edelman, Mohamed Sanu) or trying to restart their career (Damiere Byrd, Marqise Lee).

Those outside experts lifted the hopes of fans that the Patriots would no doubt dip into the pool of talent. Well, we should know by now, Bill Belichick doesn’t swim unless the water is just right. No Tee Higgins, Brandon Aiyuk (who played with Harry at Arizona State), Michael Pittman, KJ Hamler or Denzel Mims. The Patriots will take their chances with the names above, in addition to Gunner Olszewski, Quincy Adeboyejo and Devin Ross and go from there.

“We’ll see how all that goes. I’m sure all our young players will improve in year two,” Belichick told me Saturday night. “(We) got a first-round pick on N’Keal last year, (used a 2020) second round pick on Sanu. That was really off this draft. Obviously, (we) have Julian and a number of other young players. I think that will be a very good group. There’s a lot of different ways and times to build your team. The draft is one of them. As I mentioned, whether it’s Sanu or free agents signing like Byrd, whatever the case might be, there’s multiple ways to build your roster, and this is one of them.”

As for quarterback, with Tom Brady in Tampa, there was again an assumption that there were plenty of quarterbacks worthy of a grade that would warrant drafting, names like Jordan Love, Jalen Hurts, Jake Fromm, Jacob Eason and James Morgan. Nope.

According to what several professional evaluators have told The Athletic’s Jeff Howe, Jarrett Stidham is better than Love, “and it’s not even close”. That’s apparently how the Patriots feel as well. Add that to fact that Brian Hoyer is back in New England in a system he already knows, and you see why Belichick and Nick Caserio didn’t feel compelled to draft a quarterback for the sake of drafting a quarterback.

“I like both those players,” Belichick said of Stidham and Hoyer. “We’ve had Brian a couple times. I think he certainly gives us a very solid level of play. We have a lot of confidence in him. And Jarrett had a good year last year. He improved a lot. We’ll see where that takes him. Yeah, I have confidence in both players.

“We could talk about that for a long time. But the bottom line is that we’re evaluating that position along with all the other ones,” Belichick said Saturday. “If we feel like we find the right situation, we’ll certainly draft them. We’ve drafted them in multiple years, multiple points in the draft. Didn’t work out last three days. That wasn’t by design. It could have, but it didn’t. Again, there are multiple ways to build your team. We’ll see whether or not we get word of another that comes up at a different point in time. I don’t know. We just tried to do the best we could with what we had this weekend. That’s what we did. We’ll see where it goes.”

The Patriots did reportedly sign quarterback J’Mar Smith out of Louisiana Tech in the rookie free agent period that opened immediately after the draft closed Saturday afternoon. So they will have three quarterbacks in the room as Nick Caserio had promised on Friday evening.

Still, they could’ve taken a quarterback or receiver in the fifth round Saturday. Instead, they decided to go with Marshall big foot Justin Rohrwasser, capable of kicking consistently on kickoffs and converting field goals from beyond 40 yards, with a big leg suited for outdoor elements in New England. We all know by now what special teams and a reliable powerful kicker means to Belichick, and apparently in this draft it was more important than wideouts James Proche, Darnell Mooney or Donovan Peoples-Jones.

“We’ve got like 250 kicks of him going all the way back to when he was at URI and Marshall,” Belichick said. “We’ve seen it all. Yeah, there’s plenty of film on him. I think like a lot of players, you can see their consistency improve over the course of their career, as they get fundamentally better, get bigger and stronger, grow into their bodies like most college kids do. Yeah, again, he’s kicked in not great conditions.

“There’s been plenty of days that he’s had good conditions. I’m not saying it’s all been blizzards. He’s got a good leg, kicks the ball straight, has good hang time on the kickoffs, gets it up on the field goals. We’ll see how all that goes now in a little different environment here. But I think there’s a lot to like with him. He did well at both URI and at Marshall.”

After the first-ever virtual draft, the Patriots now will join 31 other NFL teams in trying to get their rookies up to speed in a rookie mini-camp.

“We’ll pretty much follow the format that we’ve done with the veteran players,” Belichick said. “We’ll have a rookie mini-camp, if you will, take that time to try to orient the players the best that we can to some of the things that they’re going to be dealing with and also to try to start the process of new terminology, nomenclature, terms, so forth. Then eventually we’ll follow that up with the rookie developmental period that according to the league I think is May 11th. That will eventually merge into a full scale like OTA type meeting schedule that we would normally have, without the on-the-fieldwork, but try to use that time to bring the team together in terms of putting our plays in and so forth, also trying to help them structure their training so they can best prepare for the season. Whatever guidance and direction we get on that, when we get it, we’ll modify things as necessary.”

Perhaps in an offseason that’s been anything but normal, Belichick gave an indication Saturday evening that things could be getting back to some normalcy soon.

“At this point I’d say we’re planning kind of a normal spring in terms of covering material and giving them information, testing them to make sure that they are comprehending it, can give it back to us,” he said. “But we’ll just have to modify that as we go. Whether it’s training camp in the early part of the season, so forth, however that ends up happening, we’re ready to adjust along the way.

“But so far, I would say after a week of meeting with the players last week that these Webex meetings have gone very well, in a way surprising, better than I would have expected. Haven’t really been any problems. Players are engaged. They’re learning a lot of material and putting a lot of time and work in it. They’re following the guidelines that we’ve given them in terms of their training program, on-the-field training program, weight lifting and so forth. There are obviously varying degrees of facilities, equipment and so forth. But one way or another I think they’re finding a way to work around it, and we are too. I commend them for that. Hopefully we can string a few good weeks together and be the best prepared we can to get ready for training camp. Certainly not what we’re used to doing, but everybody is dealing with the same situations. We’ll try to make the most of whatever opportunities there are.”