Why Bill Belichick Treasures Leadership So Much and How Devin McCourty, Nate Solder Lead The Way 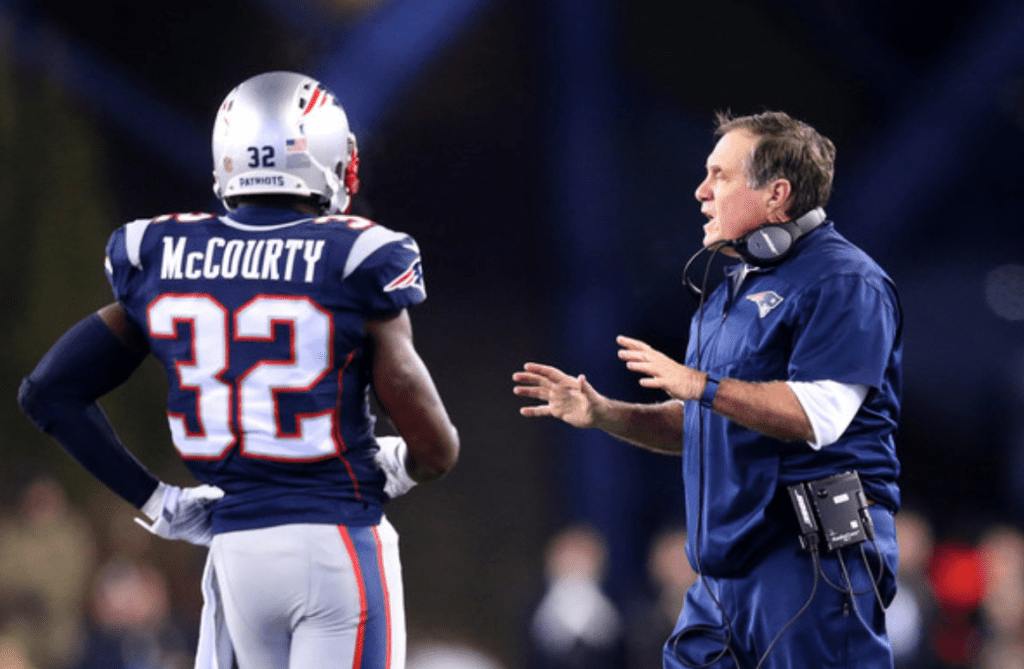 One could easily make the argument that the most important intangible to Bill Belichick is leadership.

How does a player behave in success and adversity and what is that player’s message to the rest of the team when the pressure is on?

Certainly toughness and intelligence are right up there on the intangible list for the Patriots coach but they don’t mean much if he doesn’t have players who know how to gather others together and get them to play as one.

That is leadership in the Bill Belichick mold: Get the most out of others by showing them what sacrifice is all about.

Belichick will readily admit, as he did again on Friday, that he’s been blessed in his time with the Patriots with plenty of great leaders. Two of them this year have certainly risen to the top for different reasons.

When Stephon Gilmore was struggling at the start of the season, it was Devin McCourty who told everyone who would listen that it wasn’t on the high-priced free agent to do it himself. It was a unit breakdown that was resulting in big play after big play. McCourty, the leader of the secondary as free safety, kept repeating that once he could get everyone on the same page, the results would show. Now, Gilmore is playing at a high level with a supreme level of confidence just when the Patriots need him most.

After eight straight wins, the Patriots (10-2) have the chance to clinch their 10th straight AFC East title Monday night in Miami and McCourty spoke this week about not taking it for granted. Belichick was asked Friday if McCourty is someone he relies on to make sure messages of urgency are delivered in the locker room.

“He would be absolutely at the top of that list, 100 percent,” Belichick said. “He does it every day. Devin just does a tremendous job – the leadership that he’s given us, the professionalism, the embodiment of the team and putting the team first, I mean, on every level. I don’t know how it could be really much better or any better than what it is.

“I mean, he does a tremendous job every day from 7 in the morning when things start going here, to our meetings, to our walkthroughs, to the practice field, to the film sessions, to game days, to after the game – the way he handles every situation, he does a great job for us. The leadership he gives us is tremendous. I mean, I don’t know what else to say.”

“I think you could identify it at Rutgers, absolutely,” Belichick said of McCourty’s intangibles. “I think you could identify it there without question. Now, there and here is two different things, but in that setting, on that team, in that environment, I think he had great leadership. And, again, that’s not the easiest thing to do at the corner position. It’s easier to have more communication because you’re making the calls, because you’re kind of – I mean, defense is structured from the inside out, just like everything else is. The center and quarterback and a personal protector and a middle linebacker and a safety – communication works from the inside out, not the outside in.”

McCourty has reached the next level of leadership in Belichick’s eyes. It’s one thing to be a leader, it’s quite another to promote leadership within your group on the team. McCourty has done just that with the likes of Duron Harmon and ex-Pat Logan Ryan over the last three seasons. McCourty realizes that to be an effective general in the secondary, he needs others to help take accountability for their own jobs and roles.

“So, the location of his position has facilitated that, but in terms of coming to work every day, being prepared, doing things for the team, helping his teammates out, being a great teammate and all those things – I mean, that’s not really position related and all those things are in place,” Belichick added. “But, defensively, his position has lent itself more to that than corner did, but his rookie year he played corner, went to the Pro Bowl and gave a lot of leadership at that position, as well.

“I think that’s one of the things that you see from a player, whether it be Devin McCourty or Jerod Mayo or Logan Mankins or guys like that that as rookies, they might not be ‘the team leader,’ but within that group, within that rookie group, they show great leadership. And then a lot of times that second year, as it did with Mayo, as it did with McCourty, the third year with David Andrews, you sometimes see that accelerated jump in leadership and those guys being selected as captains by their teammates, things like that.”

Then there’s Nate Solder. The father of a young cancer patient has battled through the grind of taking care of his son, Hudson, while trying to prepare week-in and week-out to protect Tom Brady’s blind side from the best pass rushers in the NFL. For this remarkable effort, Solder Thursday was nominated for the Walter Payton Man of the Year Award.

“Nate works hard, he’s always been a great teammate, a great worker in the weight room and on the field, very diligent, always tries to do his absolute best, whatever you ask him to do. He started off playing right tackle for us and then left tackle. He played a lot of jumbo tight end his rookie year. He’s always embraced whatever role it is we’ve asked him to take on and has done his absolute best with it. I mean, off the field, I think his involvement with his family and what he does in other areas, charitable areas, and with underprivileged children and hospital visits and so forth is exemplary, and that’s been well recognized, as well. Yeah, he does a great job.”

There’s no bigger or better leader on the Patriots than the quarterback, something Belichick again referenced Friday.

“We all want to play and coach our best football at this time of year. Tom’s in that group. So is everybody else,” Belichick said when asked what makes Brady so clutch in December and late in the season. “These are the most important games. We’re playing for the AFC East championship this week, so you want to play your best and he does. I want to coach my best and I think we all feel the same way about that. Tom is a very competitive guy. He works hard every week. But yeah, when there’s a little bit more at stake and the ante moves up I think you compete a little bit harder. You prepare a little bit harder. Tom does a great job playing under pressure and handling big games, if that’s what you want to call it. I think that’s always been a strength of his.”