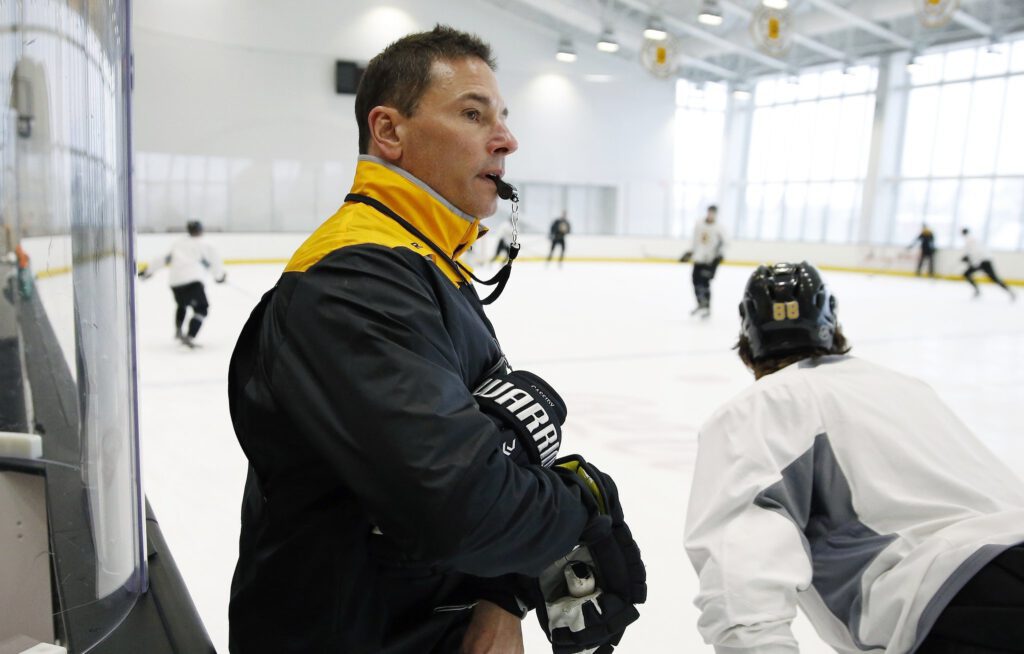 There was doubt. Lots of doubt.

When Bruce Cassidy was hired as interim Bruins head coach on Feb. 7, 2017, the franchise was at a low point. They were on track to miss the playoffs for a third straight season, which is an unacceptable stat in the Hub. Claude Julien had just been fired after nearly 10 years of service as Boston’s bench boss. Throw on the Bruins announcing Julien’s firing the morning of the Patriots parade — which featured huge blowback at the time — and the Bruins had a mess on their hands.

The replacement failed to inspire confidence. Though it was some 14 years prior, Cassidy didn’t exactly do so hot in his first NHL head coaching gig back with the Capitals.

It certainly didn’t look like a promising second chance for Cassidy.

“We had 48 hours and a couple practices to get going,” Cassidy said of when he was hired. “Obviously felt bad for Claude, he’d done a terrific job, brought a cup to Boston, you never like to go in in those circumstances. Then it’s kind of like ‘I better get to work’. It was a second chance for me, so you’ve got to put those feelings aside and get down to business.”

Yet here we are over three years later and Cassidy’s tenure has been every bit a success, capped off with his first Jack Adams Award as best NHL coach for 2019-20. The second chance has most certainly been one of prosperity.

The accomplishments are many for the Bruins under Cassidy’s direction. In that tumultuous 2016-17 season, the Bruins limped into the first round with a team strung together by glue, eventually losing to the Senators in six games. In his first three full seasons as head coach, Boston came within a game of winning the Stanley Cup, and reached the second round in the two other years.

Cassidy’s 143 wins rank second among all NHL teams since he took the helm. His 319 points also rank second. Even more impressive: the Bruins have only allowed an average of 2.52 goals per game, good for first in the league.

All of that didn’t appear to be the course of the franchise back in 2017, yet Cassidy diverted the train and led the Bruins — along with a then-aging veteran core — back to being consistent Stanley Cup contenders.

At 37 years old, Cassidy was clearly in over his head when he took the job as head coach of the Washington Capitals back in 2002.

From his first official address to his new team being read off a napkin, to arriving late to team busses, to screaming matches with players, Cassidy’s first go-around as a bench boss was nothing short of a disaster. The piece in the Washington Post about his time in the nation’s capital is appalling.

Now Cassidy is 55 and many years removed from that experience. Things have gone much differently in Boston, and a large part of that is because of that tenure with the Caps.

“I’m 17 years older,” Cassidy said of comparing then to now. “You should learn in that time. No matter what you’re doing in any career or walk of life, you should be better at what you do if you use your eyes and ears.”

Cassidy has a wife and two kids now. That’s actually helped Cassidy become a better coach throughout his time in Boston.

“Better balance with my family,” Cassidy said via Zoom Wednesday night. “Family life has allowed me to park hockey some days when I probably would’ve overanalyzed it when I was younger. I think that was the biggest thing back then — trying to do too much sometimes instead of just letting the job organically flow and stick to your principles and ideas and what you believe in back then.”

The dressing room Cassidy stepped into in Boston wasn’t too far off from the one he walked into in Washington. The Capitals had their fair share of veterans like Jaromir Jagr, Olaf Kolzig and Robert Lang. The situation with the Bruins could’ve been even more intimidating with stars like Zdeno Chara, Patrice Bergeron, David Krejci and Tuukka Rask.

But when Cassidy took over the Bruins, he opted to trust the veteran core and let them lead in the dressing room.

“Zee probably helped me more than I’ve helped him,” Cassidy said of Chara after the Bruins were eliminated in Game 5 against the Lightning.

Clearly his handling of the Bruins hierarchy has worked, and that’s in large part due to his mishandling of Washington’s 17 years ago.

It seems like it was forever ago, but one of the biggest storylines that once surrounded the Bruins was when would Brad Marchand finally clean up his act? That reached its peak after the 2017-18 season ended with a five-game, second-round loss to the Lightning and lots of licking of opposing players by Marchand.

For the first time in his career, it wasn’t just the league who wanted No. 63 to change his act — his team was pretty sick of it, too.

Cassidy knew Marchand through their time with the Providence Bruins, so he felt he could be the one to really get through to the mind no one could seem to switch. The coach had the star player and his family over during the summer of 2018 to chat about a change. Simply put, the Bruins wanted Marchand spending more time on the ice than in the penalty box.

“[I] talked to him about what he wanted his legacy to be down the road and how the sideshow sort of issues didn’t have to be there for him,” Cassidy said of his time with Marchand. “He was too good a player and too valuable to the team.”

The mid-summer heart-to-heart appears to have worked, as Marchand’s eliminated most of the shenanigans that once plagued his game. On top of that, Marchand posted a 100-point regular season in 2018-19 and would’ve hit that again had the 2019-20 season been completed.

“It was nice to be able to do that with a player and his family,” Cassidy said of that summer meet-up with Marchand. “It doesn’t happen with everybody, he was amenable to that. I think it helped our relationship to do it away from the rink, offseason, where he’s just talking with two hockey people about what can be done better. How much that had to do with it, I don’t know, but certainly a couple angles we approached with Marchy, and he’s full value with all the accolades he gets and he’s truly an elite player in the National Hockey League.”

On the ice, Cassidy moved Marchand from in front of the net to the half-wall on the power play, which is another move that’s paid dividends. Marchand’s been a large part of the league’s best power play unit over the past couple seasons.

That’s far from the only on-ice change Cassidy has instituted that the Bruins have reaped benefits from.

When Cassidy was given the middle spot to stand on behind the Bruins bench in February 2017, the Bruins were a team with an issue of generating high-danger chances. There were lots of shots, but they came from the perimeter.

Cassidy wanted to utilize the shiftiness and creativity of his wings better. He called for more dashes from the corner to the net with the puck rather than going low to high and having the d-men rip shot after shot from the point.

“I thought we used our practice time well, tried to get the Bruins back to the team they were,” Cassidy said of when he took over. “Change a few things, play a bit faster, a little more creative offensively. That’s how I looked at it at the time.”

Ironically enough, next season could see Cassidy revert back to a bit more of the low-to-high offense. The Hurricanes and Lightning utilized shots from the point well against Boston, leading the Bruins to want to incorporate more of that into their game.

“Now we have to find a balance,” Cassidy said in his exit interview of the low-to-high offense. “It’s not like this was a revelation yesterday. It has been something we’ve been building in. And then you have to have the skillset to get a shot through. I think it’s one of the most underrated skillsets in the National Hockey League, is a defenseman’s ability to walk the blue line laterally and find a stick, get a puck through in time. Whether that is a half slapper, wrister, if you have time for a slap shot, to create offense. Obviously joining the rush. When D join the rush and it breaks down, there is probably something coming back at you.”

It’s a balance Cassidy must wrestle with throughout the offseason with Torey Krug — the team’s best offensive d-man — potentially leaving via free agency.

But for now, Cassidy gets to enjoy basking in the honor of winning the Jack Adams Award and rightfully so.

Go back to February of 2017 and tell Bruins fans what the team would become over the next three years. They probably won’t believe you.

And go back to December of 2003 while you’re at it and tell Capitals players that their recently ousted head coach would take home the Jack Adams Award 17 years later. They most certainly won’t believe you.