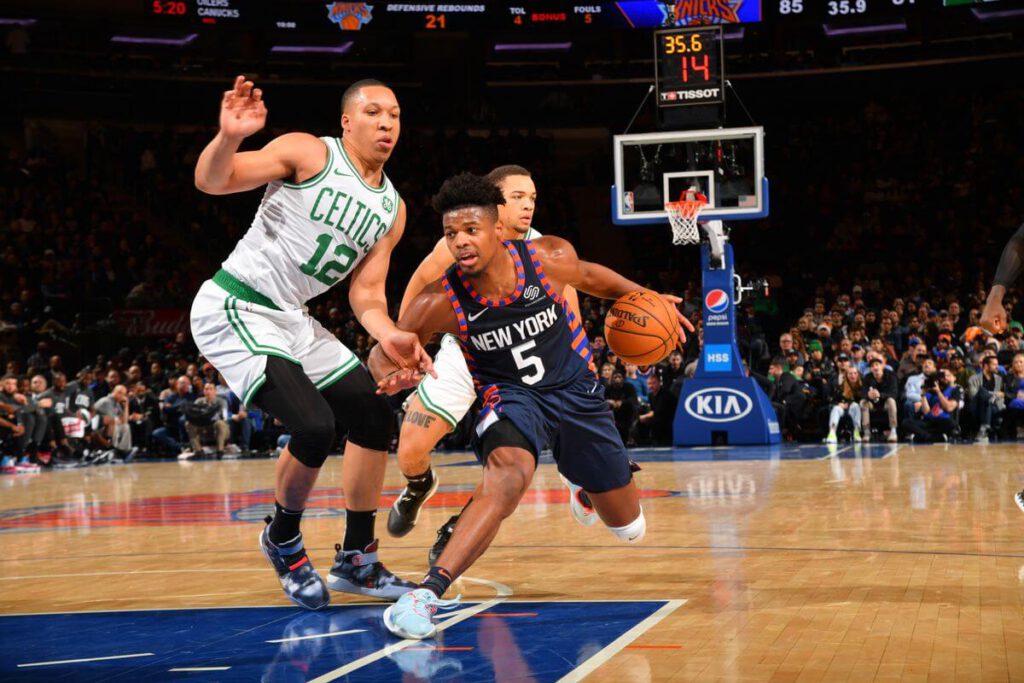 NEW YORK — Facing off against a driven Knicks team thirsty for a win that would snap their five-game losing streak, the Celtics found themselves on the verge of falling into a double-digit hole late in the third quarter.

Brad Stevens knew he needed to make a drastic change, one that would elevate his team’s defense while also keeping the pressure on New York’s defenders. It started with Brad Wanamaker, who entered the game to finish the third frame, followed by rookie Grant Williams, who subbed in before the third quarter’s final minutes — the two stayed in and anchored the Celtics’ defense into the final frame.

They combined for eight points in five minutes and led a handful of defensive stops until the Knicks’ lead diminished into only a four-point advantage. With only eight minutes left, Stevens kept the rookie on the floor, and closed out the Knicks with three of his starters (Kemba Walker, Jayson Tatum, Jaylen Brown) along with Semi Ojeleye.

Boston flipped the game around with a 26-11 run and kept the Knicks at bay en route to a 113-104 win. The Celtics eventually outscored their opponent, 32-19 in the fourth quarter.

“We had a good defensive lineup out there,” Stevens said. “It was hard for us to get defensive stops most of the night. I didn’t think we were very good in the first three quarters but they played well, made some shots and they bullied us a little bit.”

Tatum and Brown combined for 31 first-half points. They got out to a hot start. They both established their outside touch early and often while also capitalizing on scoring opportunities in transition and poured it on in the fourth quarter, when they mattered most.

Led by Tatum’s 30-point performance, they combined for 58 on 21-of-41 attempts while Kemba Walker finished with a double-double (16 points, 10 assists) and Wanamaker added 11 points and three assists. Williams led with a game-high plus-17 game rating.

New York kicked off the second half on a 14-5 run, and to make matters worse for the Celtics, Marcus Smart hit the deck early in the third quarter. He was in pain, reaching for his left hip before he was helped off the floor and into the locker room.

Boston announced later in the game that Smart was going to take the day off. With Smart out, Stevens needed help from his second unit, Williams and Wanamaker certainly answered the call.

“We weren’t very good at the start of the game,” Stevens said. “We didn’t come out with the right stuff but it’s good that we can turn it to that level. We had some great ball pressure plays in the end there that helped us create separation and then we made some shots but I don’t think we can keep going into games giving up 85 points with 10 minutes to go or at the end of the third and expect to be successful.”

Stevens will need to rely on guys like Wanamaker and Williams to weather the storm throughout the middle quarters. They’re important for the Celtics moving forward as Stevens continues to search for a steady player rotation that can offer consistency on both ends of the floor.

Without efforts from the two, and to a certain extent Ojeleye’s contribution, it would have been difficult for the Celtics to top the Knicks Sunday. Julius Randle, who finished with 26 points and shot 50-percent from the floor, was in the zone while Dennis Smith Jr. nearly clocked in 40 minutes off the bench after he lit up the Celtics for 17 points to go with his 7 assists.

There’s no telling how much time Smart is going to miss; meaning Wanamaker’s contribution will be that much more important moving forward. Williams, who continues to earn himself opportunities in the frontcourt, still needs to prove he’s reliable.

The center position has been a revolving door that’s filled on a situation-by-situation basis but Williams can find stability in filling such an important secondary role for Stevens, he could blossom into an everyday NBA player. Health concerns between Enes Kanter and Daniel Theis have certainly complicated things this season for Stevens but Williams offers much more flexibility as someone who can defend multiple positions and is a high-volume rebounder when he’s at his best.

Still, the Celtics survived and improve to 14-5 on the season, they’ll will head back home for a matchup against the Heat Wednesday night at TD Garden.