Why Don Sweeney Faces Most Important Offseason As Bruins GM 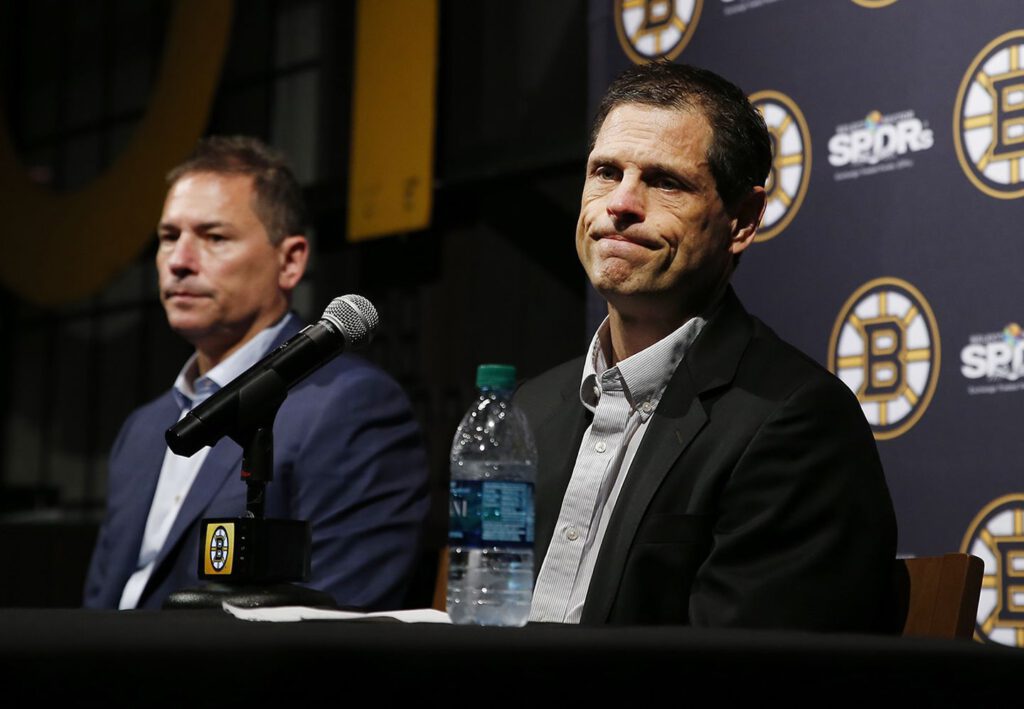 When history looks back on the course of the Bruins over the next three to five years, the actions — or inactions — taken by Don Sweeney and the franchise this week will be looked at with the greatest degrees of scrutiny.

The Bruins haven’t had a roster shakeup in quite some time. For almost all of Sweeney’s tenure as GM, Boston has had bits and pieces of itself change, but nothing major. It’s almost as if the Bruins have had minor renovations, yet nothing to really change their core or direction.

This week has the possibility to change that.

The NHL Draft begins Tuesday night and free agency opens on Friday. The Bruins have an aging core, a solid young crew — with a few awaiting new deals — and money to spend. Add on the league’s flat salary cap causing a crazy trade market and the Bruins have a chance to make monumental moves for the first time since 2015 when Sweeney dealt away Milan Lucic and Dougie Hamilton.

“I think we’re in a decent position that way, we have some flexibility, we’re not tight in some of those situations,” Sweeney said Monday morning of the state of the Bruins heading into the offseason. “And we’ve got to make some hard decisions.”

Hard decisions will certainly be a theme of this upcoming week for these Bruins.

What to do about the first round

Whether or not the Bruins trade up in the draft will pretty much be the indicator of how they view their roster: one to contend or one to potentially rebuild.

Boston lost its first-round pick this year in the deal for Ondrej Kase and the salary dump of David Backes. The whole point of giving up the first rounder in that case was to contend — the team added a top-six forward, which was a need.

Now the Bruins have an internal debate — one Cam Neely alluded to when he said they must be “brutally honest” with the roster. Do they go all in and capitalize on what’s probably the final year of this core or do they retool for future Cup runs?

If the Bruins don’t have a selection in the top 31 Tuesday night, they won’t have drafted in the first round in two of the past three seasons. They lost their 2018 first-round selection in the Rick Nash trade and then their one in 2020 for Kase.

Two first rounders for Nash and Kase. I’ll let you be the judge of that one.

“The first round is talent laden,” Sweeney said. “The draft is deep overall. I think if the opportunity presents itself, we’re going to have to explore it. There has been plenty of talk overall. It hasn’t been a heck of a lot of player movement and such, but we’re getting down to the final stages so if anything is going to happen, it has to happen within the next 48 hours to get in, if you’re trying to trade back in. There’s been some discussions. It’s just expensive this time of the year.”

Sweeney’s right — it is expensive to trade into the first round. A first-round selection is treated like gold in the NHL.

Whatever the Bruins do when it comes to the first-round signals what direction they’re likely headed in — keep all pieces and go all-in on the Stanley Cup next season or give up an asset, draft in the first-round and put a good, young talent in the back pocket.

There is no clear right answer.

This is one of the really hard decisions Sweeney must ponder over the next week: what is the future of Jake DeBrusk in Boston?

DeBrusk is currently in need of a new deal as a restricted free agent. Unless there’s an offer sheet, teams aren’t going to be having bidding wars over the left winger.

There was some talk this past summer that DeBrusk could net upwards of $6 million per season on his next deal. If so, that would be a lot for a winger who’s scored more than 20 goals only once in his three seasons (27 in 2018-19) and has been known to have inconsistencies in his production.

If Sweeney can’t talk DeBrusk and agent Rick Valette away from a price point in that vicinity, the Bruins could look to deal him.

According to Fluto Shinzawa of The Athletic, the Bruins are “listening on DeBrusk and Carlo”. The idea from the Bruins perspective would be to take two players who are part of the younger core and package them in separate deals for better players.

Obviously, this won’t be an easy call for Sweeney. DeBrusk has the upside of a 30-plus goal-scorer in the NHL. Those don’t exactly grow on trees.

On the downside, DeBrusk on Krejci’s left side might not be enough to get past the Lightning. That could be all the push Sweeney needs to pull the trigger.

Oliver Ekman-Larsson would be an upgrade on the back-end for the Bruins. If Torey Krug does indeed walk — which it sure looks like that will be the outcome — Ekman-Larsson along with Charlie McAvoy, Matt Grzelcyk and Carlo would be a really solid top-four.

However, the deal being a success for the Bruins actually hinges on how much of Ekman-Larsson’s $8.25 million AAV they’d obtain.

If Boston is to pay the entirety of OEL’s contact, they’ll be on the hook for that amount every year through 2026-27. We’ll all be elderly by then.

For a defenseman who is already showing signs of a decline at 29-year-old, that’s not the guy you want that kind of money tied up in.

But if the Bruins can somehow only pay $5.25-$6.25 million of it, that would be a win. In that case, the Bruins would have to give up more in the trade. According to Sportsnet, the Coyotes like the Bruins prospect pool more, but the Canucks are more eager to get a deal done for OEL.

Ekman-Larsson has yet to expand his trade list past Vancouver and Boston, leaving the Coyotes really only those two teams to try and get a deal done with. According to TSN, Ekman-Larsson has imposed a Friday deadline for when he can be traded by.

Although a top-four, left-shot defenseman isn’t an urgent need for the Bruins, Ekman-Larsson would still fit. Since 2017-18, 41 of his 116 points came on the power play. He’d most likely step in as power plays quarterback and play alongside either Carlo or McAvoy.

Would it be exciting to watch Kevin Dean and Bruce Cassidy’s creativity at work to figure out the best way to deploy Ekman-Larsson? Yes.

What to do with Torey Krug and Zdeno Chara

For years, Zdeno Chara and Torey Krug have been the two most consistent defenders on Boston’s backend. Chara signed on with the Bruins in the summer of 2006. Krug signed out of Michigan State back in 2012 and burst onto the scene in the 2013 postseason.

There’s a chance both have skated their last shift with the Bruins.

Chara is 43 and a UFA. His best days are far behind him and he’s been playing on a series of one-year deals.

“We’ve just had really broad-based discussions on everything,” Sweeney said of his contract discussions with Chara. “Not really going to leave any stone unturned in terms of where are we. We’ve looked at that as part of our roster assessment and making sure we communicate effectively with a very important part and leader of our hockey club.”

Krug is 29 and also a UFA. He’s in the midst of his prime and looking to cash in. The Bruins reportedly offered Krug a deal worth $6.5 million per for six years. In his exit interview, Krug said “it is what it is” when asked about his contract talks with the Bruins.

Sweeney confirmed on Monday morning no progress has made thus far with Krug.

“We’d consider anything at this point in time including the fact that several free agents have have gone and tested the market and come back to the same place that they were at, and it’s something we would also consider,” Sweeney said. “There’s no way in hell you’re going to change my opinion of what I think Torey has the right to do and I believe that. So, he’s put himself in a great position either with us or with other teams that have interest in him. I’ll listen to any situation that might improve our hockey club and move forward from there if it plays out that way.”

It sounds as though the Bruins are letting Krug test the market and in the event there isn’t anything better out there — which totally could happen due to the flat cap — Boston’s offer will still stand.

Nonetheless, the Bruins could still lose their two most consistent defenders of the past seven years. Sweeney and the B’s will have to find a way to make up for that.

The future of Tuukka Rask in Boston

The big one. Here’s the one that has everybody freaking out, and rightfully so: this is the franchise we’re talking about.

Frank Seravalli of TSN reported on Oct. 1 that Sweeney was calling other team to see what Rask’s trade value would be. On Oct. 3, Dominic Tiano tweeted that Sweeney asked Rask for his no-trade list.

“As a matter of fact, our staff has communicated with Tuukka and as I said before, he remains a big part of our roster planning going forward because I think by my knowledge, he was second in the Vezina balloting and we feel very, very comfortable with where our goaltending is at,” he said. “And I think you’re going to need it. I don’t know what the schedule and what the season – I think there are a lot of things that are up in the air, but it could be a challenging environment from a season standpoint. Might make goaltending even more a big part of what you have to have going forward.”

Rask is 33 with a year left on his current deal. It’s hard to imagine the Bruins handing him an expensive, long-term contract once this one expires given how teams now approach paying older goalies. It’s Sweeney’s job to listen for offers on Rask given the contract status.

Again, this goes back to how the Bruins are approaching this offseason and the years to come. If they believe next season is the season to go for the Cup, Rask should be the goaltender no question about it. The tandem of Rask and Jaroslav Halak is the best Bruins goaltending duo to roll out if the Cup is the only focus.

Things could get crazy if the Bruins believe they can still compete for a Cup and save Rask’s money.

That would force the Bruins to get creative. If a Stanley Cup is the goal, getting a comparable 1B to Halak isn’t going to cut it. Apologies in advance to those who want the Bruins to sign Henrik Lundqvist. The one that hurts the most is Anton Khudobin not being the answer in net even though he’s the answer to literally everything else in life. I actually apologize for that.

There’s no other palatable goalies on the free agent market for the Bruins, so save your “What about Braden Holtby??” takes. Same goes for Corey Crawford (issue: talent) and Jacob Markstrom (issue: term and cost).

If the Bruins could somehow get Oliver Ekman-Larsson AND Darcy Kuemper, that would be enough to justify still contending for a Cup and saving money in the process. Kuemper only carries an AAV of $4.25 million. In that scenario, the Bruins could then potentially flip Rask for a first-round pick…?