The Heat zone had no impact on Jayson Tatum and the scorching Celtics offense it once silenced two years ago. 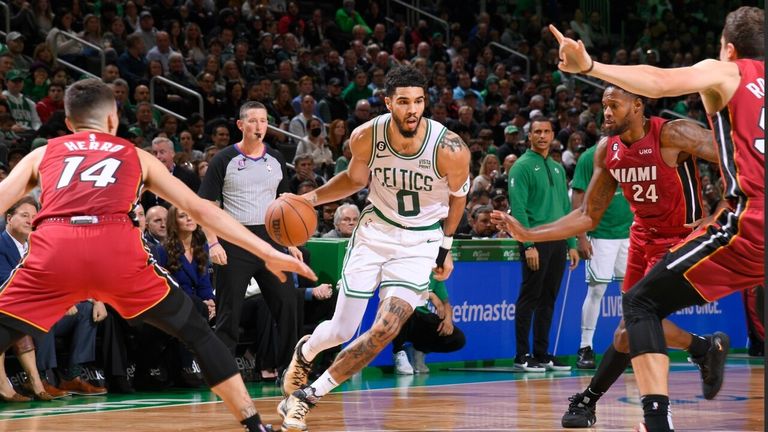 BOSTON — Malcolm Brogdon watched the Celtics and Heat play in the east finals in May, roughly two months before he’d join Boston through a trade, noticing the physicality of the series. He thought Boston outcompeted Miami across seven games.

Zone didn’t factor heavily into that, but on Wednesday, the Heat unloaded a heavy dose of a scheme that once completely stalled the Celtics’ offense in 2020.

“I remember that zone,” Grant Williams told CLNS Media post-game, looking back at his rookie season. “They used to have two of their bigger wings at the top. Now, it’s different, because they still have the shooters and lesser defenders, quote, unquote, in the top of the zone with Bam (Adebayo) in the back, but they play a little bit differently. They used to play the ball screen actions with their guard rather than their big, but they’re just trying to find whatever they can to stop the offense that we have. It shows how much we’ve grown, how much we’ve improved moving the ball, because back in the day, we would just run an angle pick-and-roll and just get stagnant and just get three or four missed shots and we would go right to the same action. You can tell that everybody has a lot more trust in one another to make plays.”

Jayson Tatum torched the look by playing in the middle, cutting to the interior, running the break and popping behind arc. He threatened the big man playing screens with pull-up threes while his back-to-back makes from deep in the closing minutes buried the Heat, 134-121, Boston’s 14th win over its last 15 games. Tatum scored 49 points with 11 rebounds and three assists on 15-for-25 shooting. He added 11 points at the free throw line.

While Joe Mazzulla nit-picked his own performance anticipating what the Heat would feature on their way to 52.2% shooting, Tatum credited an extensive walk-through film session for preparing them against the zone. Pass fakes, cuts and many of the same initiatives leading to the team’s unprecedented offensive explosion drove the devastating effort. One Erik Spoelstra acknowledged probably couldn’t have been stopped with man defense.

“It’s tough to compare,” he told CLNS. “We didn’t play this much zone against them last year. I just think tonight (Tatum) was in such a groove. He knocked down some open threes and then he hit some tough ones and then he was able to get some drives, get to the free throw line, all that stuff. It just got him fully in rhythm. Whether it’s man or a zone, you’re dealing with a great player. It doesn’t matter. The schemes don’t matter. It’s about making it tough, getting him out of his absolute comfort areas, and that’s a whole lot easier said than done, but that’s this league.”

Al Horford found Tatum cutting for the first basket for the game before Jaylen Brown pass faked to Horford posting Kyle Lowry on the second possession. That drew Adebayo in one step off Tatum, who Brown fired to in the right wing for a four-point play. The Celtics’ spacing in the half court caught Tyler Herro between Tatum and Horford atop the zone plays later, and Boston led 17-4 before a Heat rally tightened the game from then on.

Mazzulla refocused the offense in timeouts through a string of 16 turnovers uncharacteristic from the Celtics early this year he saw coming as a result of the defense tightening. Boston refocused on the details in those moments and went only trailed briefly in the first and second quarters before holding a lead for the entire second half. Tatum continued screening, cutting and his off-ball habits that are driving an MVP campaign.

“It makes him super difficult to guard,” Grant said. “The best superstars are the ones that are willing to work not only with the ball in their hands, but when they don’t have it, and his ability to create separation and create an advantage for not only a player that has the ball in his hands or if he has it, it’s just so unique and genuine, and he does phenomenal job of playing with that pace, understanding that he may not necessarily get the shot every time, but he’s creating great looks for the offense.”

The Celtics continued their unprecedented run from deep to start a season, finishing 22-for-45 (48.9%) from deep, Brogdon, Tatum and Derrick White accounting for 16. They assisted on 32 of their 46 makes, and Brown and Tatum combined to shoot 12-for-17 at the rim.

Those in-between looks kept Miami even further off-balance in the first half when Tatum and Brogdon hunted a soft spot in the zone.

An increasingly flexible Celtics unit grabbed 11 offensive rebounds. Grant’s dive to the floor to recover a missed Smart floater led to back-to-back Tatum threes that sent the Garden into a frenzy as Tatum marched toward 41 points in three quarters.

Max Strus hit 5-of-6 tries from three through that frame to pull the Heat within 95-94 approaching the fourth. Haywood Highsmith, who added four more threes on six tries to boost Miami’s offense with Jimmy Butler out again, stripped Tatum, who dove to the floor and tossed a pass while sitting toward White for a dunk.

White got Brogdon a quick entry pass for a three moments later and Luke Kornet closed the quarter with a layup. Brown, while Tatum sat for the first five minutes of the next quarter, led a 14-12 run to extend the lead.

A bread-and-butter high post entry to Horford got Tatum his next basket for 44, a quick pass back behind the arc for three. Then, Grant and Tatum set simultaneous screens to pop the latter out for another catch-and-shoot triple from Smart to put the Celtics ahead by 10. He reached 49 points moments later when Adebayo got himself ejected with consecutive technical fouls and exited to go back to the drawing board. It likely won’t involve zone.

“I think that’s something we’ve done a really good job of this season, talking through things and implementing them in the game at night time. The coaching staff really prepared us well, just don’t stand in one spot,” Tatum said. “Don’t hold the ball too long. Those are kind of the fundamental points of our offense, right? Continue to move, pass up a good shot for a great shot, regardless if they’re in man or zone. Everybody knows that, regardless of whatever the lineup, whatever the time is. That’s just kind of what we try to go out there and do.”