Why Jayson Tatum is ‘Not Excited’ about Orlando, but says Celtics ‘Might as well try to Win a Championship’ 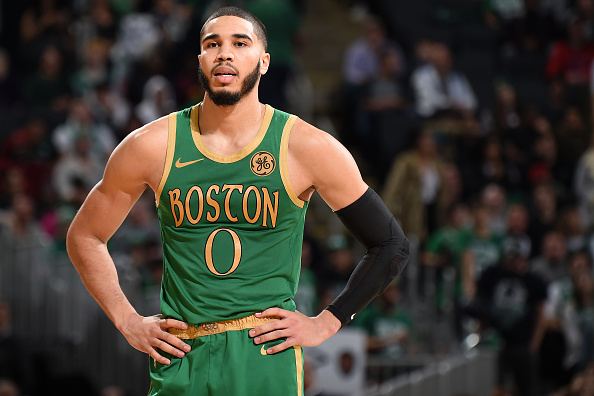 BOSTON, MA - NOVEMBER 27: Jayson Tatum #0 of the Boston Celtics looks on against the Brooklyn Nets on November 27, 2019 at the TD Garden in Boston, Massachusetts. NOTE TO USER: User expressly acknowledges and agrees that, by downloading and or using this photograph, User is consenting to the terms and conditions of the Getty Images License Agreement. Mandatory Copyright Notice: Copyright 2019 NBAE (Photo by Brian Babineau/NBAE via Getty Images)
Share
Facebook Twitter Email

Celtics All-Star Jayson Tatum is not excited about the league’s restart; nonetheless; he’s all in on heading to Orlando to chase an NBA title.

Tatum, who spoke to media members on a Zoom call from the Auerbach Center Tuesday afternoon, said he wasn’t always on board to head to Florida and recently made the decision — one that wasn’t easy to make — not too long ago.

“I was very unsure,” Tatum said. “I don’t think I made a decision until probably a few days ago. There’s a multitude of reasons why I wasn’t comfortable. Still not excited, not thrilled.”

As the Celtics head to Orlando this week, there’s going to be a lot of changes to get used to surrounding the beginning phase of the league’s “bubble” as we inch closer to exhibition basketball games that are slated to kick-off for Boston on July 24 against the Thunder. For starters, COVID-19 — the pandemic’s spread is rampant in Florida — Tatum mentioned state’s growing numbers.

He also spent a great deal of time talking about the nation’s ongoing fight against police brutality and systemic racism — another reason why Tatum considered staying home. While millions viewed the gruesome video of Geroge Floyd’s murder, Tatum couldn’t help but wonder about other cases of police brutality that ended in fatalities, cases from the past that will never see the light of day.

“It’s scary to think about all the things that we may not see or may not hear about,” Tatum said. “But I think now more than ever, people are more willing to have these tough discussions. More willing to listen, open to change.”

Tatum hopes the season’s resume will help continue the conversation and bring new information to light.

Hopefully, this is a great opportunity to continue to raise awareness and be part of history” Tatum said. “As we continue the Black Lives Matter movement and fight against racism, hopefully, this is going to help. A lot of people are going to be watching. I think we can make a stand and continue to raise awareness and not let the conversation die down. I think it’s going to be part of history. That’s a big reason why I decided to go.”

Also, a recent report from the New York Daily News suggesting that Tatum didn’t want to head to Orlando in fear he would jeopardize his max-contract, also factored into his decision to rejoin his teammates.

“I knew that if I didn’t play without people hearing why I wasn’t going to play, I knew they would assume I didn’t want to play because I didn’t want to risk losing out of that contract and that would be insensitive, especially during this time when so many people have to file for unemployment,” Tatum said. “For me, to be worried about x-amount of dollars — that didn’t have anything to do (with it) or sway if I was going to play or not.

“For me, the main concern was just being away from my son,” Tatum said. “That’s what’s most important for me and if I was or wasn’t going to play.”

The rumor may have helped push Tatum toward the direction of playing, however, in the end, there was only one thing that was truly holding Tatum back above everything else — his son.

“For me, just being away from my son for two or three months — that’s what’s really bothering me,” Tatum added. “Knowing that he’s only 2 ½, especially that young, their growth, they change every week. Just knowing I’m going to miss out on that. It’s been tough.”

Tatum will ultimately turn to his teammates as he makes the transition from stay-at-home dad to championship contender. Fortunately for Tatum, who said he can’t wait to see people’s new haircut/looks after months of isolation, he’s looking forward to seeing everyone.

They’re a great group to be around, he said of the Celtics — a team Tatum, who’s never seen an NBA season end sooner than the Eastern Conference semifinals, believes has a shot at bringing home a championship.

“If we’re going to go down there, we might as well try to win a championship,” Tatum said. “That’s our goal and our focus. Everybody is in the same boat. Nobody has played around the league so we’re starting from ground zero and whoever can normalize it and not make any excuses, and just play basketball — will be the most successful team.”