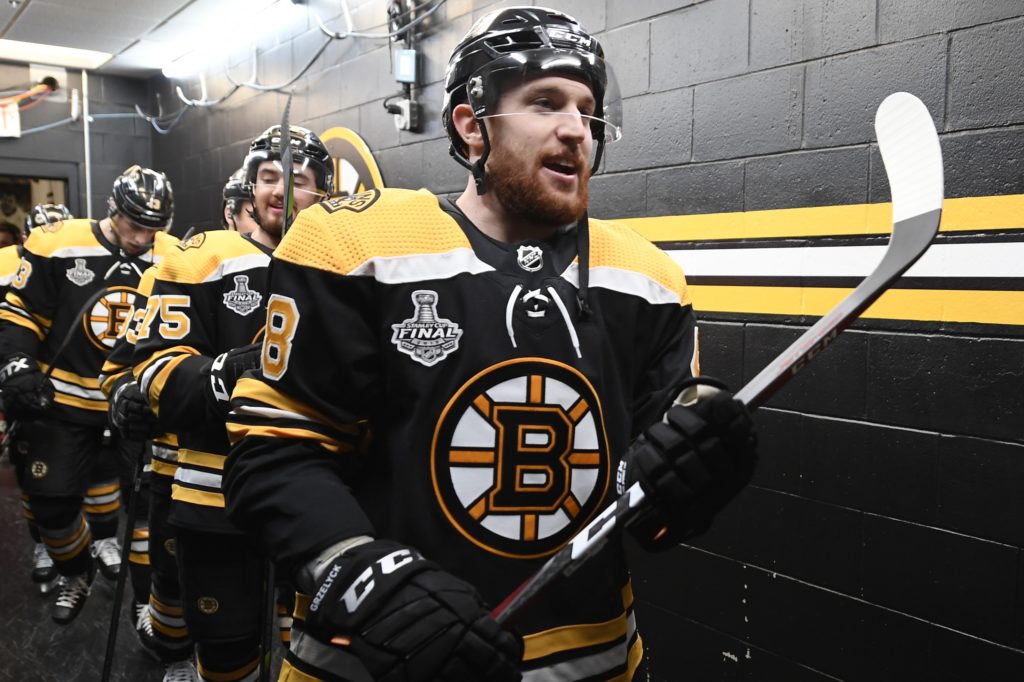 The story of the Bruins offseason will be what happens with Torey Krug. It feels as though he’ll likely pack his bags and dawn a new sweater next season. Nevertheless, he’s one of the top fish in this offseason’s free agent class and where Krug skates next deserves all the attention.

Then there’s 43-year-old Zdeno Chara and restricted free agent Jake DeBrusk. Chara’s expressed a desire to return. It would most likely be for one year and under $2 million. DeBrusk’s is a bit more murky. His agent went on record saying his client should net $6 million per season. That seems highly unlikely given DeBrusk’s inconsistencies.

And then there’s Matt Grzelcyk.

Barring anything crazy, which obviously could happen since it’s 2020, the Bruins will bring the RFA back. Grzelyck has every intention of staying in Boston. Here’s some news: he’s from Charlestown and his father is part of the TD Garden bull gang. I’ll bet that’s the 741st time you’ve heard that.

At any rate, no issues should arise with Grzelcyk’s re-signing.

With the likelihood of Krug heading elsewhere increasing by the day, so too does Grzelcyk’s chances of stepping into a bigger role with the team. And by bigger, we’re talking a huge increase in responsibility.

For starters, Grzelcyk would take the reigns of power play quarterback on the first unit if Krug doesn’t return. That’s how it’s played out when Krug sits for a game and it’s expected that would happen in the likely event Krug leaves.

Grzelcyk’s sample size on the top unit is tiny compared to Krug’s, but No. 48 has spent enough time quarterbacking to render his numbers valid.

“I’ve gotten thrust into that opportunity quite a different number of times, just a short stint, but I think that whenever I get in that position it’s a little different animal,” Grzelcyk said during his exit interview of taking over the top power play unit in the past. “Torey can do quite a different number of things, how he moves down the wall is something that I haven’t really added to my game and things like that. When I’m in that position I’m kind of more of just facilitating and trying to get the first unit some good looks. They’re really special players so I’m just trying to make their jobs easier and give them the puck so they have more time and space to kind of make plays.”

Here’s how the two stacked up during the 2019-20 regular season when on the ice with Brad Marchand, Patrice Bergeron and David Pastrnak. The fourth typically changed, so let’s just look at the stats with those three and Krug or Grzelcyk.

Will Grzelcyk put up the same production as Krug on the first power play unit full-time? Probably not. After all, Krug and Grzelcyk are actually much different players — Krug’s an offensive dynamo while Grzelcyk’s genius comes more with puck-moving and zone entries and exits.

Still, Grzelcyk would see a huge jump in points. That’s a lot of added value.

If Chara returns, he’s most likely going to be on the third pairing, specifically playing on penalty kills and in the defensive zone protecting a lead. That’ll most likely move Grzelcyk onto the first pairing with Charlie McAvoy.

The two have a lengthy history together. They were paired together for a good amount of time at Boston University and saw more time by each other’s side this past season. Bruins assistant coach Kevin Dean, who controls the defense, increasingly paired the two BU products together on offensive zone draws during the 2020 postseason.

McAvoy and Grzelcyk’s numbers during the 2019-20 regular season show the two have the potential to be a really solid first pairing.

In comparison, let’s look at McAvoy and Chara.

Before we jump to conclusions about both sets of numbers, we must acknowledge that both pairings had vastly different jobs. Chara and McAvoy were primarily used as the pair to go against opponent’s best lines. They were Boston’s go-to shutdown duo. Grzelcyk and McAvoy were most often used on offensive zone faceoffs. Their job was to generate offense.

Nonetheless, all signs point to Grzelcyk and McAvoy being a very solid first pairing.

That, along with quarterbacking the top power play unit, yields more dollars on Grzelcyk’s next deal.

Grzelcyk’s camp could easily ask for more money than the 26-year-old is currently worth. It also may be more cost effective for the Bruins to lock the d-man up long-term at money that looks expensive now, but will most likely look cheaper as the years move along.

The Bruins should also commit to locking up Grzelcyk long-term to have more of an incentive to protect him from the expansion draft with Krug (probably) gone.

The defenseman could command around $3.5-4 million per season because of the future. It would be well worth it for the Bruins to open their pockets to this.