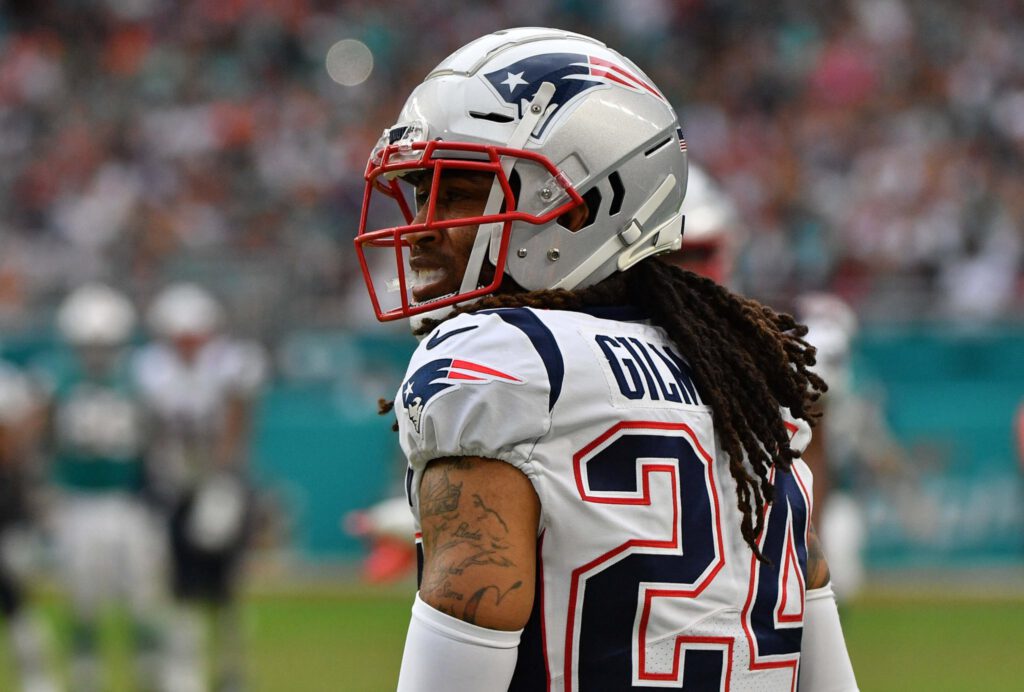 FOXBOROUGH — The Patriots and head coach Bill Belichick might not be into individual accolades, but Patriots cornerback Stephon Gilmore earned his spot on the Associated Press All-Pro team.

This season, Gilmore has put up better coverage numbers than just about anyone as his 46.7 completion percentage on passes into his coverage is second among cornerbacks, and his 18 pass breakups lead the NFL.

And Gilmore hasn’t gone up against stiffs either, shadowing some of the best receivers in the NFL this season.

The Pats cornerback tracked five current or former Pro Bowlers on more than 50 percent of their routes in matchups with New England this season, and none of those star wideouts eclipsed more than 50 receiving yards against him.

The likes of Antonio Brown, DeAndre Hopkins, Stefon Diggs, Davante Adams and Allen Robinson only caught one touchdown pass with Gilmore in coverage.

Those five elite receivers, and a few other notable names, managed a 42.9 catch rate and a 52.4 passer rating against Gilmore in coverage.

Yes, Gilmore had a slip up against Titans wide receiver Corey Davis in Week 10, but he shut down every other receiver that lined up across from him this season.

“We put him on those guys for a reason,” safety Patrick Chung said. “He’s just good, man. He’s good, he’s quiet, and he just does his job, a professional. That’s what stands out about him the most, is that he’s a professional and he comes in and studies his film and makes sure he knows what he’s supposed to do.”

“He’s done a good job for us,” said head coach Bill Belichick. “Way better than last year. I mean, he’s a good player, was a good player last year. I think his ability for us to utilize him in our system and for him to have a better understanding and for us as a group as a secondary, not just him, but the entire group to function as one. He improved last year over the course of the year, but he’s improved this year, too.”

Belichick also compared Gilmore to Patriots great Ty Law and Aqib Talib in terms of his ability to shadow elite receivers and give input on how New England game plans for them.

“Yeah, of course. Yeah, sure,” Belichick said when asked if Gilmore’s impact was similar to other shutdown corners that have come through New England. “I have a ton of respect for Stephon. He’s covered and played against a lot of guys in this league. I mean, he’s willing to do whatever you ask him to do. I don’t think it’s a question of that. But yeah, you talk to those guys when you talk about matching them up — Ty [Law] or [Aqib] Talib or Gilmore, guys like that.”

“You know, ‘How do you feel about certain guys?’ Because, again, playing against them is one thing, but how a particular player plays against them and what do you feel good about on the matchups or anything you’re worried about. You know, and then they tell you and sometimes that helps you how you want to defend them.”

Along with the head coach, Gilmore’s quarterback sees how valuable he is to the defense going up against him in practice every day.

“He’s had a great year, and he’s been just so solid. It’s tough to complete the ball on him,” Brady said. “We feel that way in practice. I’ve played with a lot of good corners, and he’s right up there with the best of them. He knocks the ball away, intercepts the ball, makes the quarterback pay. He’s physical, good in the run game, good in zone, good in short, intermediate, deep. I mean, he’s all-around just been a great player for us.”

As for the man himself, Gilmore credits preparation and the coaching staff for his stellar season.

“Once they tell me our assignments, I just try to put myself in a position to watch it on film and see what I would do in a certain formation and just play the game in my head,” he said. “I watch every game. Sometimes if I don’t have enough film on this year, I even go back to last year. I see how they release off the ball, it’s the little things you have to look at, at corner, to try and get a certain step on guys.”

Gilmore also told me that he prefers to shadow one receiver so he can focus his film study on one player, study their routes and tendencies to put himself in a position to succeed on game day.

With that in mind, the Patriots’ coaching staff allowed Gilmore to cover one receiver over 50 percent of the time in 13 of 16 regular season games this season.

And with Gilmore locking down his matchup, that has allowed the Patriots’ defense to get creative with new schemes and pressure packages such as their “playground” defense which they unveiled in Week 13 and have used on roughly half of their third downs yielding a 29.3 success rate, according to NESN’s Zack Cox.

Gilmore’s ascension this season doesn’t seem to be about anything physical, he’s always had the tools, but rather a better understanding of how to deploy his skill set by the coaching staff and expanded knowledge of the Patriots’ system for the player.

Although we can determine that Gilmore is one of the league’s top cornerbacks, the big free-agent signing in the 2017 offseason will leave that up to our interpretation.

“I don’t like to talk about myself. You know that. So film don’t lie. I’ll let other people say that.”

Continue reading for some in-depth film analysis on Gilmore’s strengths in coverage:

One of the least talked about aspects of Gilmore’s game is his athleticism and 4.40-speed which helps him stay on top of deep patterns and make up ground.

On this pass breakup against Packers wideout Davante Adams, Adams runs a corner route to the back pylon, a tough route to cover from a slot alignment, and Gilmore loses ground when he collides with teammate Duron Harmon in the end zone. However, Gilmore fights through the contact, and with that speed, turns on the jets to close the gap diving in front of Adams to save a touchdown.

Against the Chiefs, Gilmore shadowed wide receiver Sammy Watkins most of the night.

Kansas City has three receivers in a bunch formation to Mahomes’ left. The Patriots defend the bunch with a “box” coverage meaning Gilmore’s responsibility is to defend the second player that runs out towards the sideline. However, Watkins and the Chiefs trick the coverage rules by having Watkins stem outside before cutting inside. Safety Duron Harmon thinks Watkins is releasing out, but he runs across the back of the end zone instead. Gilmore sees that Harmon isn’t going with Watkins, and takes off after him eventually making up the ground to break up the pass.

As noted above, Gilmore’s dedication to film study has paid huge dividends for him this season.

Here, he’s matched up with Bears wideout Allen Robinson in a stack formation. Based on the alignment, Gilmore anticipated that Trubisky would throw a fade to Robinson, and baited the young Bears quarterback into the throw. He makes it look like Trubisky will have a chance to complete the pass, and then jumps the poorly thrown ball nearly coming up with an interception.

In the first four games of last season, Gilmore struggled with the Patriots’ zone coverage concepts as he adjusted to a new defensive system.

However, this season, and in the second half of last season, he has put those struggles behind him.

On this play, the Patriots are in a cover-3 zone in the secondary with Gilmore lined up across from superstar receiver DeAndre Hopkins. Hopkins runs a deep in-cut, and Gilmore diagnosed the route quick enough to close on the Texans wideout and break up the pass showing great instincts to read Watson’s eyes and recovery speed to prevent the completion.

Finally, against Indianapolis, Gilmore had another near-interception in zone coverage.

This time, Gilmore drops into the deep third of the field in cover-3 and reads Luck’s eyes to come off the outside receiver jumping the corner route.