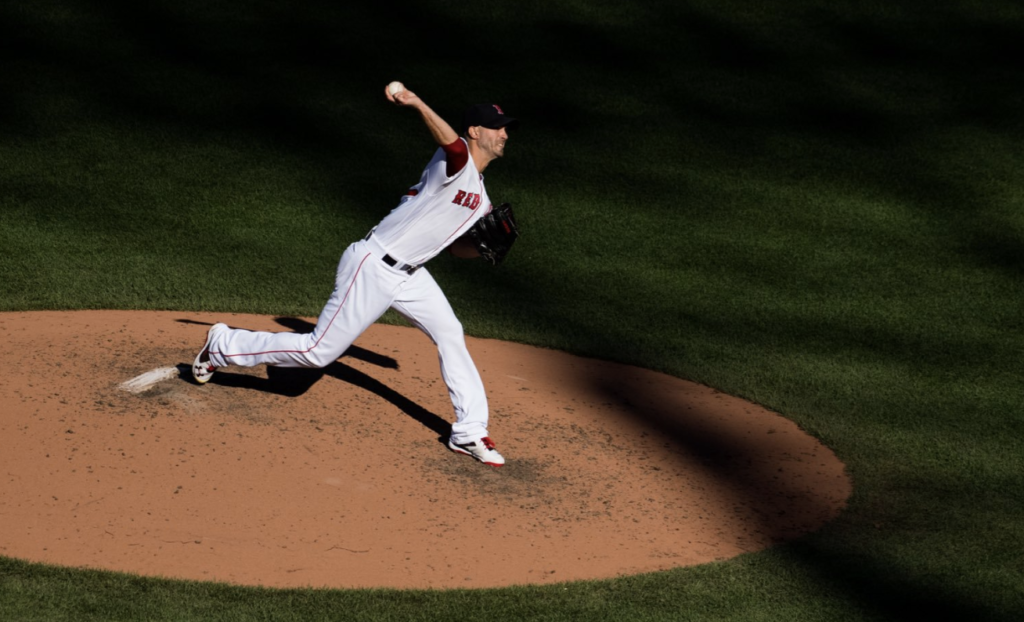 BOSTON – No one better represents the schizophrenic Sox of 2019 than Rick Porcello.

He provided yet another glaring example of what has put this season on life support on Saturday here at Fenway, a 12-4 shellacking at the hands of the fading Angels at Fenway Park.

Yes, the bullpen led by Darwinzon Hernandez and Hector Velazquez poured gasoline on the inferno but they – quoting Billy Joel – didn’t start the fire, Porcello did.

Coming off a nice four-hit, one run effort over six innings against the woeful Royals Monday night, he couldn’t deliver against an Angels team that had lost eight straight and was coming off Friday’s 16-4 embarrassment.

Porcello has teased us all season with moments like the first inning. He allows a leadoff single to Kole Calhoun then strikes out Mike Trout on a 92-MPH 2-seamer with good movement. But the good vibes didn’t last. Shohei Otani lines a double to left-center. Justin Upton goes the other way with a fastball that was outside but up in the strike zone too much.

Upton’s 3-run homer inside the Pesky Pole marked the eighth straight start Porcello has allowed a home run and was the 24th allowed this season by the Red Sox No. 3 starter. He would yield a monstrous 428-foot homer over everything in left by Trout on a batting practice fastball right down Broadway in the sixth, almost incredibly Trout’s first career homer at Fenway.

That mistake to Trout would also be the last pitch of his night. In 75 pitches of work Saturday, he allowed five hits, five runs all earned, no walks, three strikeouts and two homers.

“We have daily conversations,” Alex Cora said. “I know how hard he works.”

Make no mistake, this isn’t about Porcello’s effort or attitude. He could not have been more of a stand-up guy postgame in the Red Sox clubhouse, fielding every question and giving a sincere and thoughtful response in the wake of his latest sub-par outing. Porcello has guts. He’s also got the fire, shown by his recent demolition of two TV monitors in the Red Sox dugout.

It’s entirely about execution. And he knows, with his team in the precarious position of hanging on for dear life for a wild card run, he can’t afford to make a mistake like he did in the sixth inning.

In between the two homers, Porcello looked the part of a No. 3 starter on a team that expects to compete for a World Series every year. He had his sinker and curve working. He was spotting pitches very well and mixing it up between the second and fifth innings. There was no better example of this than the pitch he ran in on Trout in the third, inducing a weak chopper back to the mound, part of the stretch in which he retired 14 straight.

“It’s one of those where he finds his stride, he goes through the lineup but then they make him pay,” manager Alex Cora noted. “We didn’t keep the ball in the ball park and that was it… just a few pitches he didn’t execute today and they went out of the ball park.”

“Yeah, 100 percent,” Porcello told me when I asked him if he was trying to do in the third Trout at-bat what he succeeded in accomplishing with the ground out in the third inning. “Whether he swings at it or not, I’m trying to drive that fastball (inside) off the plate, create some space and make him aware of some pitches in and get to some other stuff. Honestly, the worst part about it is he’s the best hitter and that’s the worst pitch I threw all day. That’s what happens.”

Timing. Porcello hasn’t had it this year and the 2019 Red Sox haven’t had it. While one would argue that Porcello’s timing in the rotation has synced up with the best offensive support the Red Sox have provided for any pitcher this year (including five straight starts of double digit runs from June 29-July 25), his ability to get the big outs in some big moments has not been there.

That’s been the Porcello tease all season. He looks so good in certain stretches of games and then makes mistakes at crucial moments. He’s allowed 25 homers this season. That’s not necessarily the end all, be all of starters as Justin Verlander entered Saturday tied for the MLB high in home runs allowed at 29. Gerrit Cole has allowed 24. Trevor Bauer 23. But they and Robbie Ray are the only four pitchers in MLB with sub 4.00 ERAs and at least 23 dingers allowed.

“It’s wins and losses,” Porcello acknowledged. “That’s it. Bottom line. That’s what our ball club needs is wins. That’s what you get judged on. For me, it’s all about results. If you’re not getting results, you don’t take moral victories. Get it together and try to dominate in five days. That’s it.

“Each start you try to turn over. If it’s not what you want, then you try to re-focus and do the best you can mentally to set the slate clean so you’re not carrying it around, the mess you’ve created the first couple months of the year.”

With David Price on the injured list for who knows how long with a left wrist cyst, the Red Sox need Porcello, along with Chris Sale and Eduardo Rodriguez to pick it up.

Sale did his part in the opener against the Angels on Thursday. Rodriguez allowed just two runs but lasted just five innings on Wednesday vs. the Royals.

But Porcello has not proven to be that guy the Red Sox desperately need. He’s got six weeks left in a Red Sox uniform to show everyone that his game is as good as his guts.