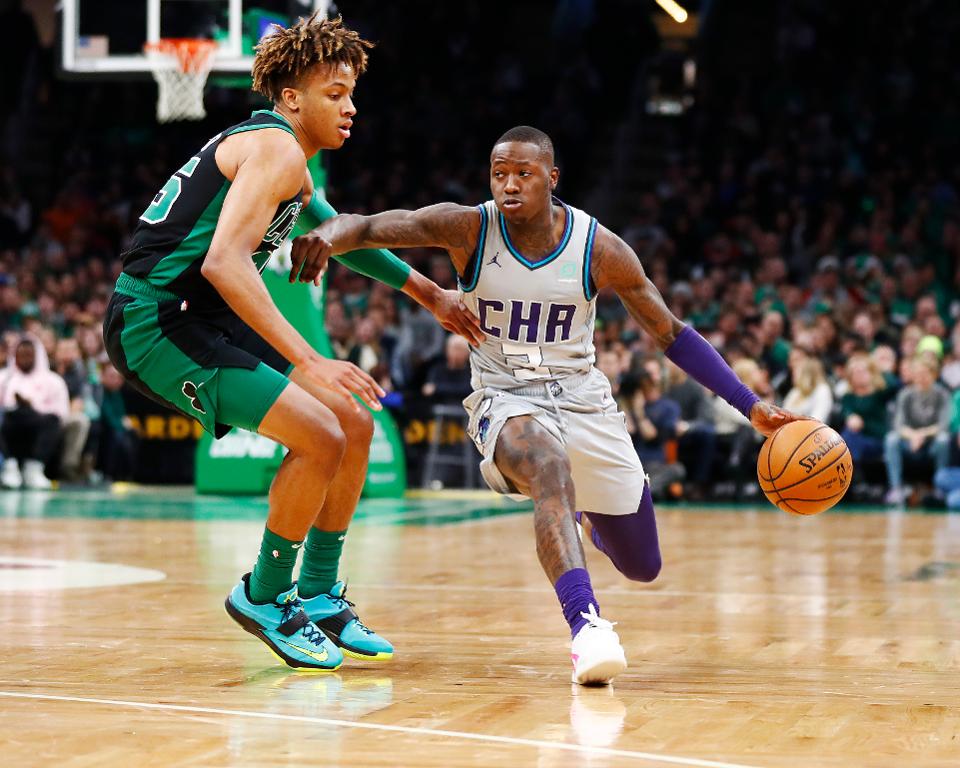 No other Celtics rookie has endured more frustration this season in Boston than Romeo Langford.

The No. 14 overall pick’s thumb injury prevented him from showcasing himself at NBA Summer League and when he was on the verge of making his league debut Langford sprained his knee in the Celtics’ final preseason game in Cleveland. From there it’s been an uphill battle for the University of Indiana product.

Last month, while playing for the Red Claws — the Celtics’ G League team — Langford added a sprained ankle to his list of injuries and the quest to make it back to Brad Stevens’ roster commenced from there. Langford made a strong case against the Hornets Sunday night.

Playing in his third consecutive game, he showed progress from the first game with the Celtics — against the Mavericks in Dallas — since his ankle injury. He converted in transition and drained a pull-up jumper in the first half while doing a little bit of everything on the defensive end from getting into the passing lanes to closing out the perimeter.

“His defense was excellent today,” Brad Stevens said after Sunday’s win. “If you go back and even watch the Dallas game, it’s night and day what three games of experience will do for you. And he may not get to play as much when we have our full roster but I think what this does is it gives you great comfort in that if you have to throw him in there for an extended period of time he’s going to do exactly what we need him to do. And he’s a very versatile wing defender, he got his hands on some balls.

“He chased people off screens and he played really hard. Like obviously, knocking down those shots is always nice but I was encouraged by Romeo’s play all weekend.”

Langford, who converted an ATO play by Brad Stevens, reached a feat not a lot of rookies earn without a lot of playing time under their belt. However, Stevens did admit the play’s option is what ultimately got the ball into Langford’s hands — a decision made by Kemba Walker.

“Most of the time though people help off the opposite side and if you look at the opposite side I had Jaylen (Brown) and Jayson (Tatum) on it,” Stevens explained. “So I don’t know that I’d give myself a whole lot of credit for calling that. I put Romeo there because I thought they’d help a little bit off him but I didn’t know they’d come all the way into the paint. So that was more of a great read by Kemba (Walker) than a draw-up by Brad.”

Prior to tip-off Sunday, Stevens updated reporters on Gordon Hayward’s status this week and while the veteran guard was unable to play against the Hornets, Hayward spent a lot of time with the team and participated in practice. Stevens is confident we’ll see him in uniform Christmas Day in Toronto to take on the Raptors.

The Celtics head coach went as far as saying Hayward is considered probable and says Marcus Smart still has a ways to go before he can return to the floor. Without Smart, Stevens will most likely lean on Langford yet again when the Celtics head to Toronto.

Stevens’ options are limited when it comes to backcourt defense throughout his second unit. However, following Sunday’s performance, Langford is earning Stevens’ trust while guys like Smart and Hayward work their way back.

“He might not get to play as much when we have our full roster,” Stevens said. “But I think what this does is it gives you a great comfort if you have to throw him in there for an extended period of time, he’s going to do exactly what we need to do.”

Langford finished with 8 points, four rebounds and one block in 23:10 against the Hornets Sunday. He also had a plus-22 game-rating — the team’s highest, second to Grant Williams, who finished with a plus-23.

Langford’s defense will earn him more playing time while the rookie continues to maximize opportunities that come his way.

“Just really going out there and doing what they are asking me to do and that is to bring some energy off the bench,” Langford said Sunday night. “Play defense and do little things that maybe don’t show up on a scorecard, but just do them.”