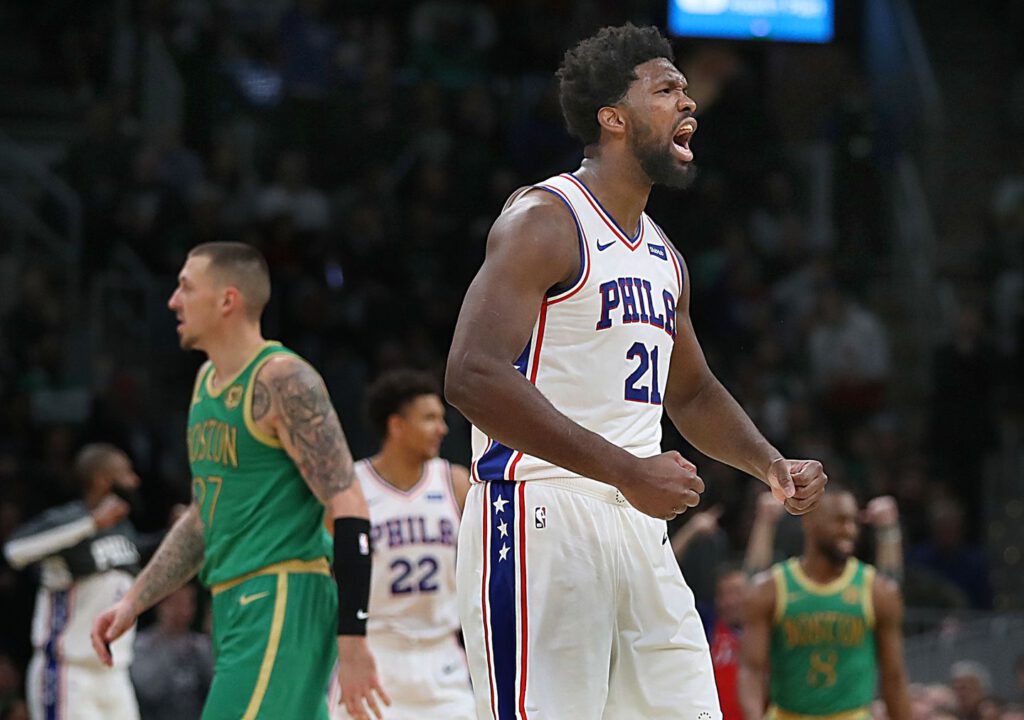 For Joel Embiid, Thursday night at TD Garden was far from just another game.

Was it an opportunity to take down the Celtics in their own building? Yes, of course, and that’s typically more than enough motivation for Embiid to put together a big performance, similar to ones we’ve seen against the Celtics in the past.

Back in March, Embiid grabbed a career-high 22 rebounds in a 118-115 Sixers win over the Celtics back in Philly. Last Christmas, he led the Sixers with 34 points, 16 rebounds at TD Garden — it came in a losing effort but was another example of how facing the Celtics seems to bring the best out of Embiid.

But this day was a little different for the All-Star big man, who was inspired Thursday night after he found himself at the focal point of a conversation between two Hall-of-Fame big men Charles Barkley and Shaquille O’Neal that happened earlier in the week. It was a discussion that centered on Embiid’s greatness.

The two shared their frustration with Embiid, a player O’Neal described as a great player but didn’t dominate against Nuggets center Nikola Jokic, who Barkley says, is the kind of player that should get the absolute best from Embiid instead of a 22-point game.

“22 is OK,” O’Neal said Tuesday night on TNT’s Inside The NBA. “But it ain’t great. You have the potential to be a great player. We expect great things from you.”

It was a conversation that lit a fire under Embiid, who told reporters Thursday morning that he embraced the criticism from two NBA legends and then he demonstrated his dominance by single-handedly carrying the Sixers to a 115-109 win over the Celtics. He dissected Boston’s defense for outside looks, posted up in the paint for high-percentage shots, made a plethora of trips to the free-throw line (12-of-14) and made critical defensive stops in the final minutes to seal the win.

Embiid led with a game-high 38 points, 13 rebounds, and six assists. It was the kind of display that reminded everyone of Barkley and O’Neal’s conversation, specifically when Kenny Smith interjected and reminded his co-hosts that Embiid is the best big man in the NBA.

But for Barkley and O’Neal, Embiid’s talent can stretch beyond being the most talented center in the league.

“For them to say that I have the potential to be the best player in the world and I haven’t shown that, and I let it be shown,” Embiid said after Thursday’s win. “That says a lot. They’ve been there, they’ve done it, they’re Hall-of-Famers, so it just shows me I have to play harder and like I can.”

Embiid’s defense has been contagious this season, the Sixers are currently one of the best defensive teams — they’re third in fewest points allowed (103.7) and have one of the best defensive efficiency ratings (1.004) just behind the Bucks, Nuggets, and Lakers. After Kemba Walker lit the Sixers up for 21 first-half points, Philly made the proper adjustments to slow him down.

The Sixers later switched their focus to Jayson Tatum, who took nine field-goal attempts before his first make in the second half, while Jaylen Brown couldn’t find much of anything on offense and Gordon Hayward’s scoring came and went. It was a challenging second half for Boston but through a string of defensive stops and points production from its big men the Celtics fought to the finish.

Daniel Theis and Enes Kanter (20 points) combined for 36 points on 17-of-24 attempts, 14 rebounds, and three blocks. They were impressive while they took advantage of open look after open look, gifted by Philadelphia’s defense that essentially challenged the Celtics’ bigs to take 15-footers — a strategy that momentarily backfired on Sixers head coach Brett Brown. It triggered a 7-0 run to pull Boston to within two (106-104) with under one minute left to play.

When the Celtics found themselves down by two again with 34.6 on the game clock, Brad Stevens called for an intentional foul on Ben Simmons, who made Stevens pay when he drained both freebies and extended Philly’s lead to four. Tatum lost Embiid down low before he ran to the corner and drained a 3-pointer to give the Celtics another chance to knot things up but a costly turnover on an inbound pass by Tatum while trailing by three with only 25 seconds left, eventually forfeited the game.

Walker, Tatum, and Brown finished the second half a combined 3-of-22 from the field — a telling combined stat that helps explain what went wrong offensively for the Celtics in the second half Thursday. The other aspect of Philly’s win boils down to how it defended Boston — something that you’re not going to find in the box score but certainly passed the eye test with flying colors.

“They kind of just stepped off the pick-and-rolls and played a bit more aggressive, I guess,” Walker said. “When you have a roll in, of course, teams are going to make adjustments and try to make it tougher on me and they did a pretty good job in the second half.”

Emiid, who said he spoke to Shaq before and after Thursday’s win, had everything to do with that.

“I appreciate you,” Embiid told Barkley and O’Neal live on TNT‘s broadcast. “I’ve really listened to what you said and Shaq, I’m going going to keep working. I’m definitely going to use that and try to get better every single night. Thank you.”

For a team like the Sixers, Embiid’s greatness will ultimately determine their fate. As the team’s most valuable player and an elite talent, Embiid is in a rare group of players who can put a team on his back and win games — it’s what superstars do and when they’re able to impact both ends of the floor more than their teammates, the next level could be just what they need to eventually make an NBA Finals appearance.

This is the season Philly is desperately hoping will be the year it makes that leap. With teams like the Bucks, Celtics, and Heat threatening its chances, Embiid needed to hear the criticism made by legends like Shaq and Barkley. Just like the Sixers need their superstar to make another significant leap, maybe even into MVP-candidate territory — it’s solely up to Embiid.

Meanwhile, in back-to-back nights, poor late-game execution by the Celtics reared its ugly head. Still, Stevens tipped his cap to the Sixers for their defense and says he’s pleased with the offense when asked about 1-on-1 tendencies between Walker and Tatum.

For Stevens, Thursday came down to defending at a high level.

“I think it’s something everybody’s working through,” Stevens said. “I feel pretty good about our offense in the last five games; (we’re) generating good looks. Our defense the last two nights, we haven’t been able to get stops. Yesterday, we scored 117 on the road, you don’t win. It’s not good enough and then today, we really needed one and we couldn’t get one. I’m not as concerned about that, it’s a heck of a defensive team we played against.

“I thought we generated way better looks than we did on October 20 — whatever it was when we played (October 23), so I’m more encouraged than anything on that end of the floor.”

Celtics will take advantage of their quarter-season break this weekend before they travel to Dallas to take on the Mavericks next Wednesday.

Does Marcus Smart Have a Real Shot at Being An All-Star?