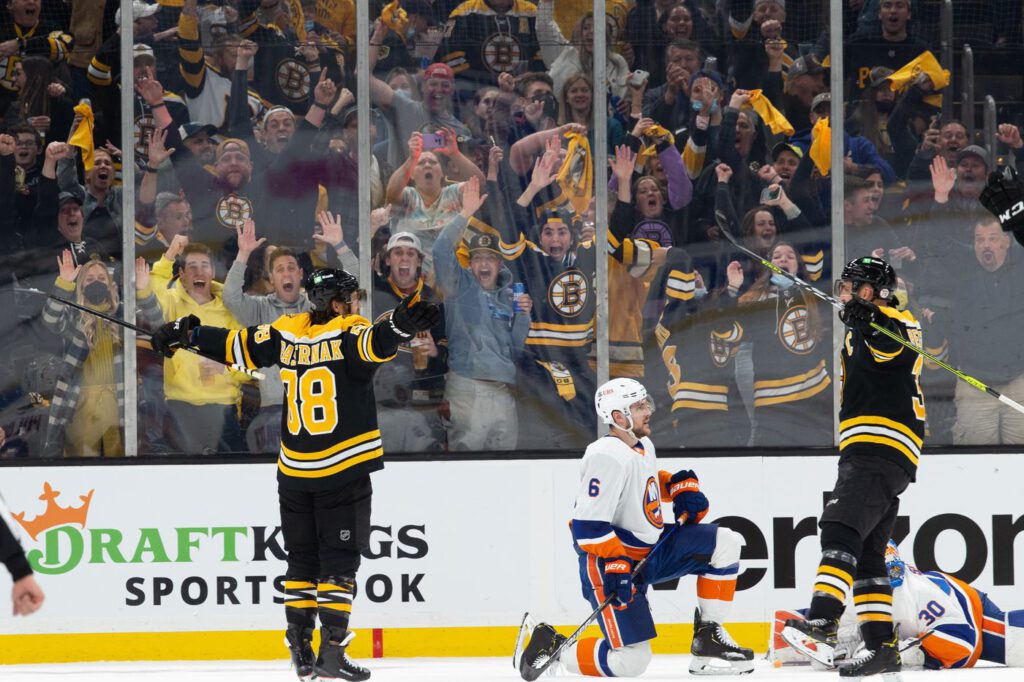 BOSTON – There were many days over the past year or so when I wondered when we’d ever see a crowd like Saturday night’s again.

Come on. You had that thought, I had that thought – we all had that thought. Back in the early days of COVID, you watched clips of old playoff games where the crowd erupted and cheered and boo’d. You watched in amazement, as people stood side by side with no masks and wore their passion on their sleeve. The only “corona” to be seen was the beer in people’s hands. The only worry was the price of it.

At some point, it hit you that you’d never take for granted going to a full-capacity sporting event ever again.

The culmination of that – actually, the explosion of that – was Saturday night when the Bruins defeated the Islanders, 5-2, in Game 1 to take a 1-0 series lead. It was the first full-house of the season at TD Garden.

“It was really special,” Charlie McAvoy said of the crowd. “It’s been awhile. I was joking around this morning that it’s been so long, tonight was going to feel like the first time again. It was awesome.”

Saturday night had every possible ingredient for an unforgettable crowd. It began with establishments being able to open to 100 percent capacity the same day, allowing bars to fit in as many patrons as the walls and floors could hold. Add in a start time of 8 p.m. and you do the math.

The crowd projected to be even more rowdy than expected when a turn onto Canal Street at 5 p.m. meant seeing an already-huge line at Hurricane O’Reilly’s. A lot of normalcy – it was nice to see.

But the obvious reason for the frenzy at TD Garden was due to it being the first game of the year with a near-capacity crowd. Aside from the few rows behind each bench and penalty box, every seat was occupied.

It started the second fans arrived at their seats roughly an hour before the game. Come warmups, the place was roughly 75 to 80 percent full.

“Never seen that many fans there early for warmups,” McAvoy said after the win. “You could tell that they were excited.”

Then came the pregame festivities. By then, every seat was taken. First, it was the Garden notifying patrons there was no smoking and a two-beer limit. They didn’t take kindly to that.

There was a much different tune being sung when it was announced that AJ Quetta – a high school hockey player who suffered a serious spinal injury four months ago – was the fan banner captain. The reception was deafening.

The starting lineups were announced. Jeremy Lauzon and Connor Clifton got cheers normally reserved for Brad Marchand and Patrice Bergeron in the Stanley Cup Final. Todd Angilly belted out the national anthem, although it was hard to hear him over all the fans singing along.

Despite all the craziness, there was still a game to be played and from start to finish, the Bruins dominated. At 5-on-5, they outchanced the Islanders, 58-30. The shots were 40-22 Boston. Go right down the list of Corsi For percentages and expected Goals For and all the fun advanced stats – they all favored Boston.

But the story of the game was still the newness of the crowd. The Islanders scored first, and it didn’t kill the energy in the building. Almost every song was sung along to.

You can guess what happened when the Bruins finally did score.

Midway through the second, the Bruins displayed the 8-Spoked Salute on the jumbotron. Staff sergeant Josh McCarthy got a very loud ovation when he was shown waving to the fans. That ovation was multiplied by 20 when he took off his uniform to show a Bruins jersey on underneath.

That was how it went all night. Everything got chants, cheers and excitement. At no moment was that truer than David Pastrnak’s hat trick goal.

When his wrist shot blazed past Ilya Sorokin to extend the Bruins lead to 4-2, the roof might as well have blown off TD Garden. Richter scales in the area had to have been alerted. The building shook.

It was that loud.

Adding onto that was all the hats flying onto the ice. Fans had been waiting 15 months to throw hats, which explains why head attire hit the ice before Pastrnak’s knee could touch down on his trademark celebration. That meant an extra two to three minutes of bedlam.

Icona Pop’s “I love it” was sung word for word.

As much celebration as there was for the game on the ice, Saturday night symbolized so much more than just winning Game 1 of a second-round series. Most Game 1’s in the second round don’t get 25 percent of the noise levels Saturday night produced.

Life hasn’t been easy since March 2020. The way of life we knew for so long was stripped down. There were lockdowns and quarantines. Many businesses were forced to close their doors for good – there’s lots of evidence of that when taking a walk around the Garden. Even when sports came back, there were no fans. The NHL and NBA bubbles last summer and fall looked miserable.

For the past two months, fans have slowly come back, and Saturday night was the finish line. It proved that games with no fans should never return.

But most importantly, it proved we should never take a full house for granted ever again.