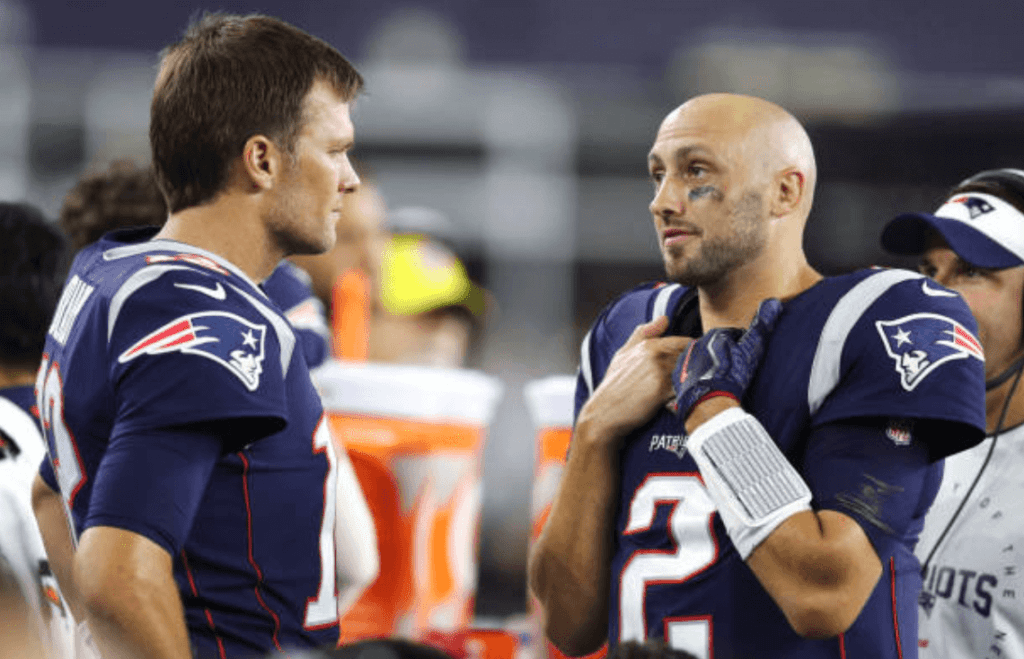 FOXBORO — The Patriots offense was a mess in the first half of their first preseason game Thursday night. And Brian Hoyer didn’t need to watch film to know it was going to look really, really bad.

But Hoyer was far from alone. The tackling in the second level and secondary was not great and Redskins receivers were running free all over the Patriots secondary.

The Patriots looked like a team shaking off the rust of a summer filled with social media crusades and just nine training camp practices.

So when Brian Hoyer opened 4-for-10 for 25 yards, the natural inclination was to think the Patriots are screwed if Tom Brady goes down. Some of that was fear was accentuated with a report after the Patriots’ 26-17 win over the Redskins that Brady didn’t play Thursday night because he was resting his back, which limited him somewhat this week in camp practice.

Then there were “We want Brady” chants heard inside Gillette Stadium. This was turning into a real ugly preseason opener. But with the Patriots backed up inside their own 10, Brian Hoyer finally found something – the short passing game. His dump-off to Brandon Bolden for nine yards with 49 seconds left in the first half and the Patriots down, 17-0, got New England kick-started. Then Hoyer found Devin Lucien over the middle for passes of 22 and 25 yards and with eight ticks left on the clock, the Patriots called time out. Stephen Gostkowski converted a 52-yard field goal and it was 17-3 at the half.

That might have seemed a small thing in a preseason game. But it certainly wasn’t insignificant. And to say these games are meaningless is to completely miss the point of their importance to a guy like Hoyer. If something indeed does happen to No. 12, it’s Hoyer on the hook to carry the load. And what he showed at the end of the first half and into the second half was an ability to string plays together, with the help of a potent run game.

ALL ABOUT ADJUSTING: Brian Hoyer explains second half rally and 2 huge second half drives. pic.twitter.com/ljwzi03zvI

Was there an attitude change at halftime?

“Yeah, definitely,” Hoyer told me. “I think to get something going right before the half, the two-minute drive – you know, you’re down there by your own end zone and you’re thinking, I think there was 50 seconds and we have one timeout, ‘Just try to get a positive play.’ And then we hit Devin on two big in cuts and get a field goal. I think that kind of jump started it a little bit.

And that’s exactly what Hoyer did, engineering drives of 19 and 16 plays for 84 and 90 yards the first two times he touched the ball in the second half. Both drives ended in touchdowns. Hoyer in the second half was 11-for-13 for 82 yards.

“Yeah, he did some good things,” Belichick said. “We didn’t have a lot of success offensively in the first half. We didn’t have any success on third down. It was a good possession before the half. He showed good poise and played some situational football there. Had more success in the second half. Again, there’s still a lot of things for us to work on, but there’s a few things to build on too. That’s about the way it usually is.”

Hoyer even executed a two-point conversion to rookie Ralph Webb for the 18-17 lead at the time.

“When you see a guy like that who you know is an undrafted guy who is getting those opportunities, it’s great to see him take advantage of it because you never know how many of those you’re going to get, and I can definitely relate to that, totally,” Hoyer said. “That’s what the preseason is for is for guys like that to get those opportunities and see what they can make of them, and Ralph did a good job.”

Hoyer even showed he could take a hit and scrap himself off the turf and keep going.

“Yeah. Welcome back to football, right? Yeah, for sure,” Hoyer said. “You know that’s just part of the game. You know, you take hits and especially being a quarterback, you’ve got to be mentally and physically tough. It was definitely a good shot. He got a good shot. But you get back up and I think you try to show your team like, ‘Hey, look. Let’s go. We’re moving the ball. This isn’t going to slow us down.’”

Wild Card Preview: Which Patriots Team Shows Up vs. Bills?

Are Patriots Issues Fixable in Time For Buffalo?

Antonio Brown Made Tom Brady And Bruce Arians Look Foolish, Bill Belichick Is Back In The Playoffs