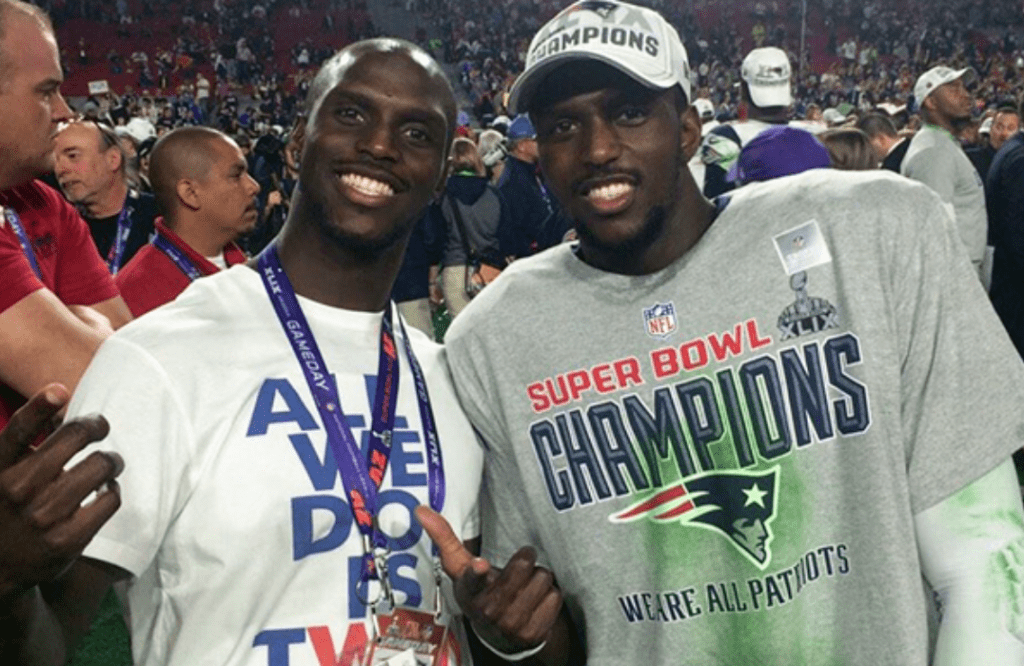 Who says Bill Belichick doesn’t have a sentimental bone in his body?

After years of speculation and hopeful anticipation, the Patriots head coach finally re-united Devin McCourty with his twin brother Jason – on the football field.

This isn’t to say Thursday’s decision to trade a sixth round pick this year to Cleveland, where McCourty was due to play out the final year of his two-year contract, wasn’t a football move first and foremost. The Patriots, who also get Cleveland’s seventh round pick this spring back, were clearly in the market for an upper-level talent corner to boost a secondary coming off an ugly Super Bowl loss to the Eagles and the loss of Malcolm Butler to Tennessee.

Before the trade, word leaked that Jason would actually be released from his contract and Devin made a thinly veiled pitch on Twitter to the Patriots to go get his brother.

Then the Patriots did the McCourtys a favor by pulling off the trade and keeping McCourty’s salary in place, eliminating the need – for now – to worry about contractual details.

But let’s not kid ourselves. The Patriots are not in the business of doing football favors. In Jason McCourty, the Patriots are getting a quality corner with a great attitude and built-in chemistry in a locker room that could use an air freshener of attitude following the Super Bowl fallout. He’s relatively cheap and gives the Patriots some valuable depth, should they decide not to pick a corner high up in the draft.

Will Jason McCourty be an upgrade? Time will tell. If nothing else, he certainly will be more economical as he’s in the final year of a contract that will pay him $2.9 million if he makes the roster. Compare that to the $61 million and $24 million guaranteed that Butler is getting in Tennessee.

Instead of playing on the shores of Lake Erie and in the midst of Cleveland’s whirlwind rebuild, the 30-year-old will get the chance to play alongside his brother for the first time since college where they played under Greg Schiano at … wait for it … Rutgers. Jason left Rutgers a year early and was selected in the 6th round of the 2009 NFL Draft. One year later, Devin was the first-round pick by Bill Belichick.

This made too much sense not to pull off.

McCourty, who graded out at 83.9 and is considered an above-average to high quality corner, was a terrific, savvy corner on a winless team and projects to play opposite Stephon Gilmore. In 14 starts in ’17, McCourty had two forced fumbles and three interceptions and is, like his brother, a very good tackler.

Put him in a defense where he’s going to play alongside his twin and another Rutgers product in Duron Harmon and the synergy should be assumed from the moment they hit the ground running in OTAs.

Jason McCourty is the perfect fit for Belichick – the under-the-radar talent. Coming out of Rutgers, McCourty was not a highly sought after prospect and did not receive an invitation to the NFL Combine. On March 23, 2009, he participated at Rutgers’ pro day, along with fellow Patriot Kenny Britt, Mike Teel, former Patriot Tiquan Underwood, Courtney Greene, Kevin Brock, Kevin Malast, and nine other teammates.

Some 41 team representatives and scouts from 27 NFL teams attended Rutgers pro day to scout one of the most talented teams in school history. McCourty ran the fastest time among any player there in the 40-yard dash.

The Titans selected McCourty in the sixth round (203rd overall) of the 2009 NFL Draft. He was the second player from Rutgers that the Tennessee Titans drafted after first-rounder Kenny Britt. McCourty made his first start on Oct. 2 against the Jaguars in place of an injured Cortland Finnegan. He signed a six-year, $43 million contract extension, with $20 million guaranteed in August 2012.

Like his brother years earlier in New England, McCourty was named a co-defensive captain during the 2015 season. On April 13, 2017, McCourty was released by the Titans after eight seasons with the team.

On May 16, 2017, McCourty signed a two-year, $6 million contract with the Browns. In the Week 2 loss to the Ravens, McCourty recorded an interception off of quarterback Joe Flacco in the second quarter and forced a fumble from Ravens’ running back Alex Collins in the fourth quarter of the 24–10 loss.

In a 2015 essay for MMQB, Jason admitted he has had to repress his jealousy for Devin and all the success his Patriots teams have had in his NFL career.

“(I’m) extremely happy for Devin (but) every year, part of me simmers with envy,” Jason wrote. “When my teammates are around, he’s always talking trash and lecturing me about what ‘winning football looks like.’ I hate the fact that only once have I played in a Week 16 game that mattered.”

McCourty just suffered the indignity of playing on the second 0-16 season in NFL history. The Patriots are coming off a Super Bowl loss that threatened to split the locker room. Bringing the two McCourty twins together just made too much sense. And Belichick knows it.

Let’s hope, if it lasts only for this year, everyone can enjoy it, including the principal characters.

If you want more of Trags, subscribe to his weekly podcast below on iTunes and Stitcher.