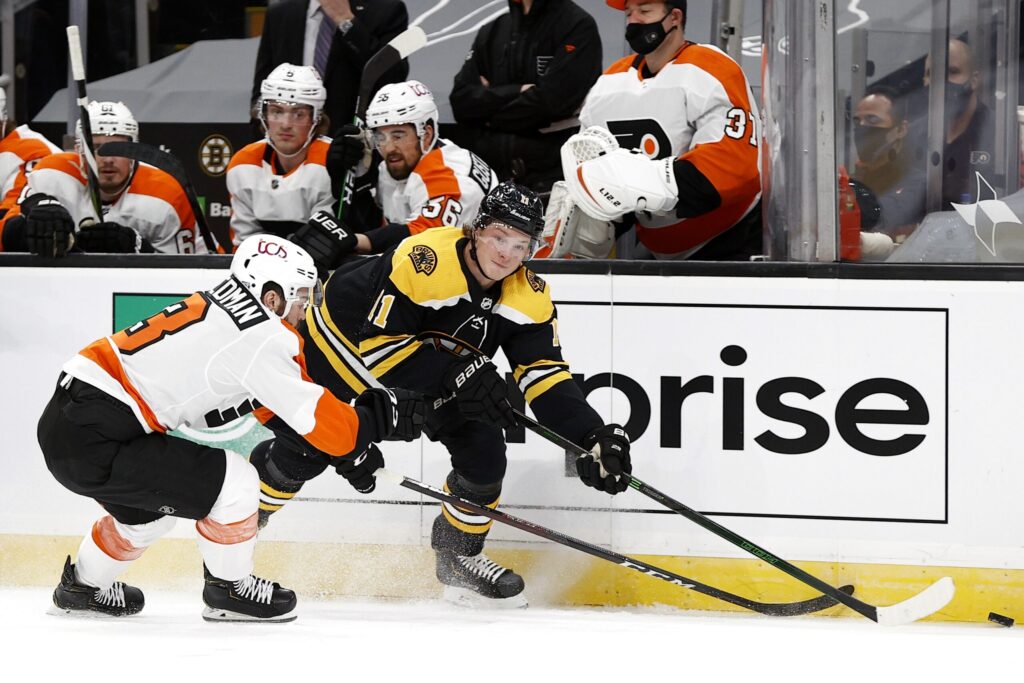 It was an assist. Aside from it being the first point of his young career, which is still a big deal, players who finish a game with one assist typically don’t get written about. That’s especially the case in a 6-1 win.

The assist itself was pretty — a feathery saucer pass past two Flyer defenders and into the sweet spot of Charlie Coyle, who tipped it past Flyers netminder Carter Hart.

“Only a matter of time,” Bruins head coach Bruce Cassidy said of Frederic’s first NHL point. “The more ice time he gets, especially with those guys, he’s around the puck. Made a really high-end play today.”

But Frederic’s case is much different when you consider the initial expectations.

When the former first-round pick’s name was being floated around early in training camp as a potential left wing on the fourth line next to Sean Kuraly and Chris Wagner, the common thought was he’d be a much-needed physical presence in a lineup that just lost Zdeno Chara. That was it. Given that Frederic led the AHL in penalty minutes last season, along with 32 points in 59 games, there wasn’t a lot of promise the 29th overall pick from 2016 would do more than that.

Through the first four games of the season, Frederic exceeded all of those projections.

For one, the physicality and aggression has certainly been there.

It began opening night when his rift with P.K. Subban took centerstage. His words got Subban to give Frederic a forearm shiver and a stroll to the penalty box. Since then, Frederic has drawn more penalties, most notably getting Flyers d-man Mark Friedman to take an unsportsmanlike conduct penalty in Saturday’s win. The Bruins scored on the ensuing power play.

“He’s always kind of stirring stuff up and always getting guys off their game,” Brad Marchand said of Frederic after the 6-1 win Saturday night.

Whether it’s telling Subban to “post another workout video” or poking at Friedman, Frederic has done that job well. But that’s not why he got the promotion to play alongside Charlie Coyle and Craig Smith Saturday night.

Through four games, Frederic showed his offensive side in a way most didn’t project. He’s been slick with the puck in the offensive zone. Time after time, Frederic has been part of the cycle in the opposition’s corner. In the games against the Devils, Cassidy deployed Frederic late in the close second game and he almost scored a goal.

“He’s not tried to do too much. He’s playing hard, he’s winning battles,” Marchand said of Frederic. “He continues to get more comfortable with the pace and with the puck. He just seems to make the right play all the time. He’s not trying to be too flashy. He’s making simple plays, hard plays, but direct.”

That advice showed itself to have worked on Saturday when Craig Smith scored his first as a Bruin.

On the play, Frederic skated right to the top of the crease and fell, but required a d-man to cover him, giving Smith the smallest bit of open space to fire one past Hart.

“He’s a big, strong kid,” Smith said of Frederic. “He can skate. He uses his legs, he can gain confidence from that. You can see he wants to do the right things, he’s talkative on the bench. He’s very open to changing things on the ice. I think he did a great job of funneling pucks tonight.”

Where Frederic funneled pucks really well was in his time playing with Kuraly and Wagner during those first four games. Those three had an impressive advanced stat line, according to Natural Stat Trick.

In 32:07 TOI at 5v5, they skated to a Corsi For percentage of 60. During that time, they generated three high-danger chances while allowing zero against. Their expected Goals For percentage wasn’t too bad either at 70.35. They outshot opponents 15-8.

Up next for Frederic will be taking more draws and getting involved on the penalty kill. Both roles equate to more playing time, which yields more of a chance of staying in Boston with the varsity club.