Xavier putting their faith and trust in one of their most successful coaches in school history. 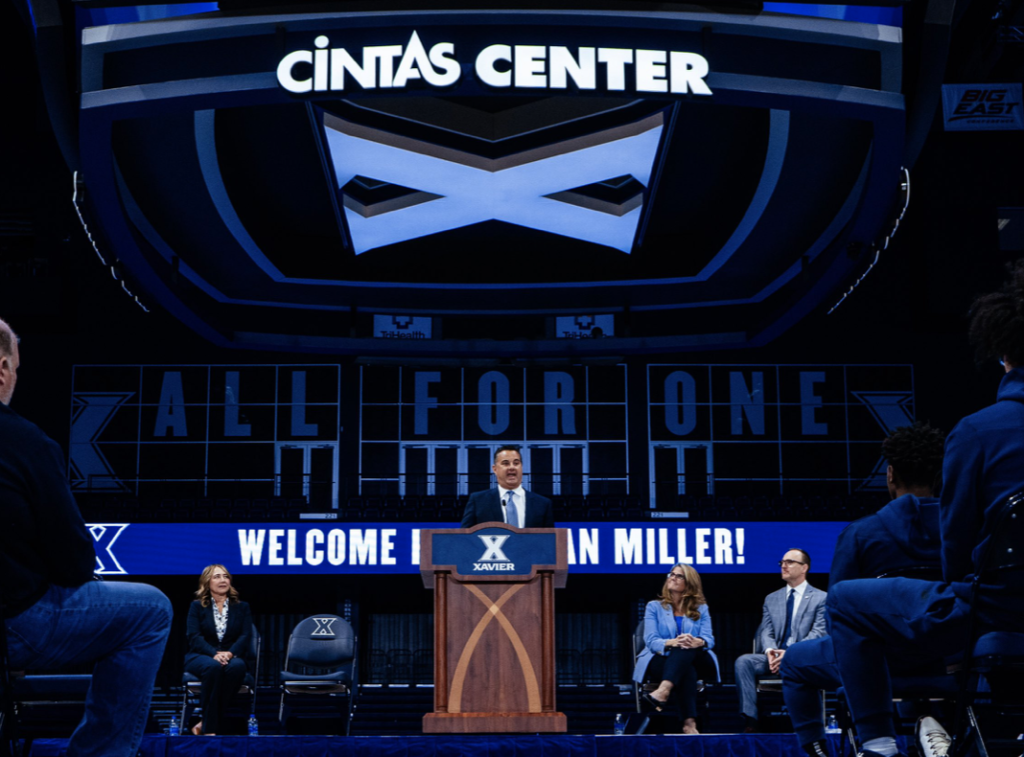 CINCINNATI – For all the optimism from a rabid fan base and alumni since the announcement of his return to the Xavier bench, Sean Miller knows he has to re-establish the trust and re-instill the attitude that produced unprecedented success in his five years as head coach over a decade ago.

In a word, culture.

Winning and success helped define that culture in his first stint on Victory Parkway. In his five seasons from 2004-09 taking over for Thad Matta, Miller coached the Muskies to a 120-47 (.719) mark. That run included back-to-back appearances in the Sweet 16, including a trip to the Elite 8 in 2008, where they lost to a powerhouse UCLA team that feature Kevin Love, Darren Collison and Russell Westbrook.

Now it’s Miller Time again as the 53-year-old returns as head coach of Xavier basketball, replacing Travis Steele, whom Miller hired to work on the Xavier staff in 2008. What’s old is new again.

“To be able to come back here and have a chance to do something for the first time that, that pinnacle, it is so hard to do,” Miller said. “You saw it (Thursday) night in the NCAA tournament, the team that I was a part of know everybody coached everybody on the team. I think except two of those players for Arizona. They lost, Houston wins. Gonzaga, they lose, Arkansas wins.

Xavier made the NCAA Tournament in each of Miller’s final four seasons at X, including the Elite Eight in 2008, when they won a school-record 30 games. Miller was named the 2007-08 Atlantic 10 Conference Coach of the Year after leading Xavier to a 14-2 record and a second straight A-10 regular season title.

Miller owns a 422-156 (.730) record in 17 years as a head coach. His credentials as a coach and program builder before taking the job at Arizona in 2009 were impeccable. And he was recognized as such.

The National Association of Basketball Coaches named Miller as its 2008 NABC District 10 Coach of the Year and he was a finalist for numerous National Coach of the Year awards. Miller came to Xavier after coaching stops at North Carolina State, Pittsburgh, Miami (Ohio) and Wisconsin.

As he mentioned Friday, he brought the right kind of players into the Xavier program, players like Romain Sato, who sacrificed sleep on gamedays to prepare for second semester exams. Players like Drew Lavender and C.J. Anderson took in the press conference in the media room from the second row and are clearly loyal and grateful for what Miller did for them in their Xavier experience.

In his 12 seasons in Tucson from 2009-21, Miller recorded a 302-109 (.735) mark. Arizona made seven NCAA Tournament appearances, including three Elite Eights and two Sweet 16s. Miller, who guided Arizona to five regular season Pac-12 conference championships and three conference tournament titles, was named Pac-10/12 Coach of the Year three times, receiving the honor in 2011, 2014 and 2017.

Under Miller’s direction, the Arizona program produced a total of 13 draft picks, including five lottery picks among a total of nine first-round selections.

But then mistakes of commission and omission were made. Some unscrupulous conduct produced self-imposed sanctions and an FBI wiretap and investigation that resulted in Arizona handing itself a one-year postseason ban for “a lack of institutional control” in the basketball program under Miller’s watch.

As the NCAA continues its probe of Arizona, Miller is confident that chapter is behind him and has no worries at all that it will follow him to Xavier.

“The matter at Arizona is separate from today here at Xavier,” Miller said. “And there will be a time and I’m confident in saying that that that topic can be talked about, but just out of respect for the process, although it’s coming to an end. It’s not there yet. And when that day and time comes, I look forward to sharing more. Right now, today is so much about returning here and certainly doing things the Xavier way.”

Obviously, Xavier officials feel the same or they wouldn’t have taken the chance on hiring him, especially after the unsavory end to the Travis Steele era.

“As this began Wednesday morning (March 16), we had a small number of targeted candidates,” said athletic director Greg Christopher. “We began a combination of vetting, introductory calls, more substantive calls, over the three-and-a-half days that led to (hiring) last weekend.

“As the dust settled from nearly five years ago, the public record here is very well established. We know what’s accurate. We know what’s not accurate. We also know the questions Sean is going to be facing. So, over the course of the last week, plus, we’ve talked to dozens and dozens of people about Sean. His former president, his former athletic directors, the staff, attorneys, the NCAA and others, and certainly hours upon hours with Sean himself.”

Ultimately, it comes down to whether Xavier trusts Miller to shoot straight with them and work toward refurbishing the brand of basketball that made it one of the winningest programs in the country for the better part of two decades.

“I’ll also tell you my approach through this has been distinctive,” Christopher continued. “Of course, I looked at it through the Xavier lens, and that was important, but also a point of view, with my background with the NCAA. Ultimately, I have complete confidence in Sean Miller running our program going forward.”

The probation and sanctions were one thing. The charges, allegedly captured on an FBI wiretap, made by Arizona assistant Emanuel “Book” Richardson would change the course of Miller’s career and Arizona basketball.

The charges against Arizona include a lack of institutional control by the men’s basketball and swimming programs, and unethical behavior by Richardson for accepting $20,000 in bribes.

Richardson was among 10 people arrested in an FBI investigation into college basketball and served three months in prison. Wiretap audio collected by the FBI and played in the federal college basketball corruption trial in May 2019 included Richardson claiming Miller paid players.

Among seven wiretap audio recordings played, there were multiple instances where Richardson suggested that Miller had paid or promised to pay high school recruits. One mention recorded in June 2017 involves Richardson claiming Miller agreed to pay or had paid $10,000 to eventual No. 1 overall NBA Draft pick Deandre Ayton.

All of this resulted in his departure from Arizona in 2021 and a year off this past season, spending time with his wife Amy and more quality time with his three sons.

On Friday, he announced himself ready to rebuild that trust in a place that couldn’t be more welcoming. The Miller Time rally Friday inside Cintas featured balloons, the pep band and about 1,000 of his most ardent fans hoping that he could help Xavier end its four-year NCAA tournament drought in 2023.

“Culture is used in every organization in our world today when things are going well,” Miller told me. “Everybody talks the word ‘culture’ when things don’t go well. You must have a terrible culture but one of the things that I’ve learned is the really true test of what you’ve built, the foundation, is when something happens and in sports in your best attempt to avoid. Catastrophe.

“It can happen in so many different ways on a college campus, that you can overcome it, that you can get through it. And when you get to the other side, you might actually be bigger and better and more prepared and that that organization you’re in charge of that team. That program may be built to last, even better than it once was.

“And it’s one of the things I’m so proud of at Arizona. We clearly went through some tough times. But if you look at the team that they had this year that was built with a lot of thought. And if you look at where they are, I think it’s built to last. I will tell you this when I got there in 2009.”

No one has had his character or will to succeed tested more than Sean Miller in the last five years. Some of it self-inflicted, perhaps. Some pure circumstance that he may or may not have had in his control.

But this is the perfect landing spot for Miller. A city and school that loves him and welcomed him “home” Friday in pep rally that showed he and his family they’re willing to help him get back on his feet and do what he does best, coach and win basketball games for Xavier.