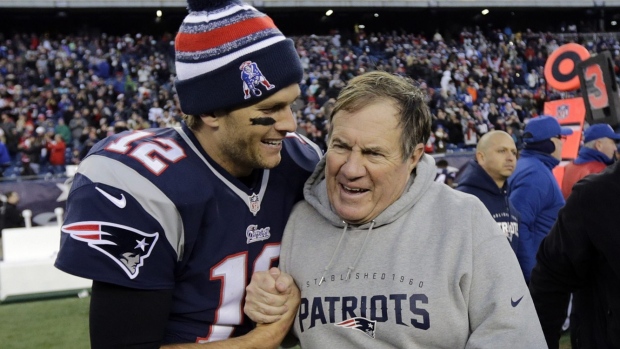 We’re going to hit you with Pats/Bucs content every day here diving into the game that’s upon us Sunday night. Patriots beat reporter Evan Lazar will have you covered all week on that front.

But you know what might be even more fun than previewing the game itself? Looking into the nitty gritty semantics surrounding the homecoming! Our friends over at BetOnline.ag have a TON of props ahead of Tom Brady’s return to Foxboro, and we’re going to outline all of them here:

How Many People Will Watch Tampa Bay vs. New England?

You could argue that this is one of the most anticipated regular season football games in NFL history. Outside of some Week 17 games that have been de facto playoff games, this one probably takes the cake. The greatest football player of all time is returning to the team that he spent 20 seasons with and won six Super Bowl titles? You bet America is going to be watching. According to SI.com, the Patriots vs. Cowboys Week 12 game in 2019 was the most watched regular season game in the last decade. This game should absolutely shatter that one – and personally, I wouldn’t want to be the guy at the water cooler on Monday who took the under on viewers.

What Will Happen On Field After the Game?

Will Tom and Bill speak? Will they embrace? Will they do it before the game? After? At all? These questions have been on my mind for weeks now. Normally, Belichick respects just about everyone who has walked through those doors at One Patriots Place. The same has gone for Tom Brady in this regard, and then some. He had this to say about both Brady and Rob Gronkowski ahead of Sunday:

A very complimentary Bill Belichick when discussing former Patriots Tom Brady and Rob Gronkowski. He said his relationship with Brady is “Good. It’s always been good.” Given BB’s coaching style, it’s easier to laud Brady’s career now so profusely than when they were together. pic.twitter.com/sbtC5UbpuT

Despite the reported falling out, there is clearly some form of respect between these two. However, Belichick normally doesn’t stick around for post-game nonsense outside of a quick handshake with the opposing head coach.

I want to point out that the prop lists AFTER the game. I’d expect Brady and Bill to get their kudos out of the way during warmups. I think “don’t touch” postgame at (+220) could be a decent play here.

What Will Be Shown First During Broadcast?

Bledsoe getting hurt/Brady taking over (-120) 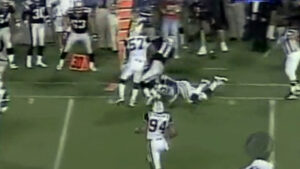 Brady shirtless at the NFL Combine (-120) These are two classic photos/videos that really signify just how happenstance the Patriots 20 year dynasty was. In order for Tom Brady to become the greatest quarterback of all time, the right coach and team had to give the lanky guy in the second picture a shot to even make the roster.

From there, the highest paid quarterback at the time and former number one overall pick Drew Bledsoe had to take the blow he took from Mo Lewis in that 2001 Jets game. The rest is history after that, but a lot had to happen to get this story to where it is today.

I don’t know which clip will be shown first, but they are both bound to make their way onto the broadcast.

Who Will Be Shown First During Broadcast?

I feel like the answer to this one is easy. I doubt Julian Edelman will be in New England for the game. He was just here last week and wouldn’t have much of a place in the festivities. Even if he is there, I’m not sure he’ll be shown on camera at all, and definitely not before Kraft or Gisele.

I’m willing to bet that Gisele will be at the game alongside her and Tom’s family. However I don’t see her being shown first on the broadcast. The storyline all night will be involving the Brady/Belichick/Kraft saga, and they’ll show him as soon as they can get eyes on him.

The correct answer here is Robert Kraft, and it’s not worth laying -300.

Who Will Be Mentioned First During Broadcast?

This is another interesting prop. Like I said above, the storyline all night is going to be surrounding Brady, Belichick, and Kraft. I think we can safely eliminate Mac Jones from this category. He is bound to be mentioned, but not first.

I think “Belichick” is worth the 3/1 odds here because this is more of a coin flip than the line says.

What Will Be Mentioned First During Broadcast?

I think “MVP” could be worth the plus money. I think Brady will be mentioned before Jones, and I’m sure they’ll mention him as either a 2-time league MVP or 5-time Super Bowl MVP.

Head to BetOnline.ag to get ahead of these props before the lines move, and keep it here on CLNSMedia.com for the latest ahead of Patriots vs. Buccaneers!