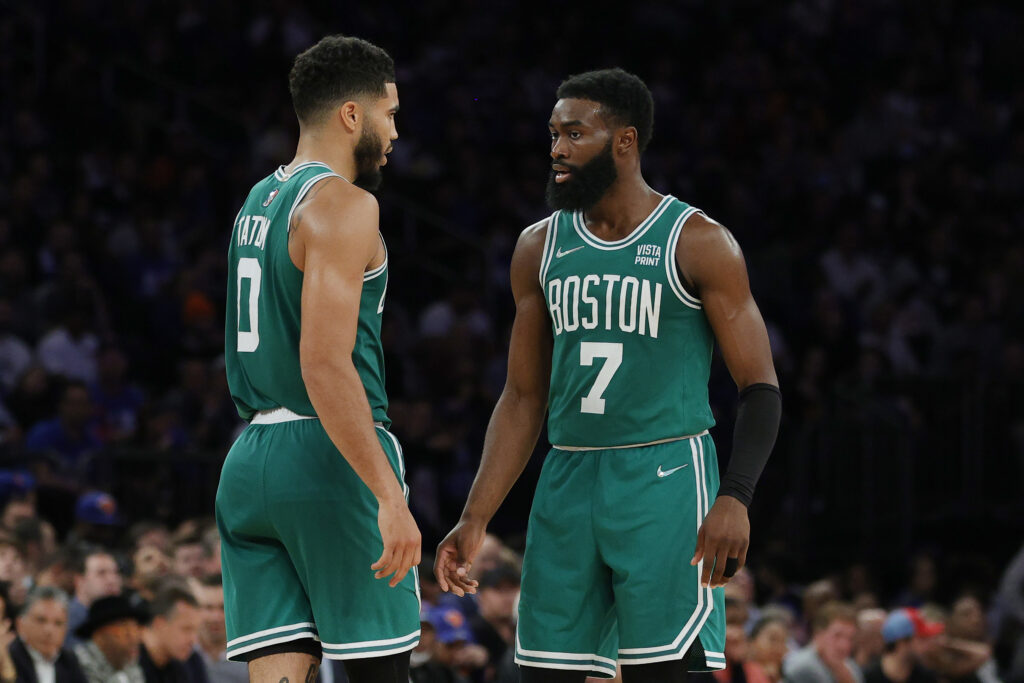 NEW YORK, NEW YORK - OCTOBER 20: Jaylen Brown #7 talks with Jayson Tatum #0 of the Boston Celtics during the second half against the New York Knicks at Madison Square Garden on October 20, 2021 in New York City. The Knicks won 138-134. NOTE TO USER: User expressly acknowledges and agrees that, by downloading and or using this photograph, User is consenting to the terms and conditions of the Getty Images License Agreement. (Photo by Sarah Stier/Getty Images)
Share
Facebook Twitter Email

Ime Udoka watched the Knicks, and much of the NBA, push faster paces in the preseason and expected to face the same in the opener. He tried to speed Boston up too, not just sprinting on the fast break, but making decisions faster in the half court. Specifically within 0.5 seconds.  That, coincided with Jaylen Brown’s natural comfort and efficiency running the break, made for a 14-point explosion by the all-star in the first five minutes.

The Celtics established a pace New York would later match to come back from down 12 points in the second quarter to win in overtime. The two teams combined to score 33 points on the fast break, with Boston establishing a ninth-ranked pace at 104.7 estimated possessions per 48 minutes after a season where they averaged 98.3. They took 117 shots, compared to New York’s 105, and lost a double overtime thriller that saw Boston successfully marry Brown’s rapid-fire tendencies with Jayson Tatum’s more deliberate approach to offense.

Brown both established the break on the dribble and shot ahead of the defense to give the Celtics outlets they couldn’t ignore. Tatum, normally comfortable grabbing defensive rebounds and walking them past half court, hit Brown through a pack of New York defenders end-to-end in two seconds to begin the game.

Brown then scorched between his long rebound following an Evan Fournier miss and his layup on the other end in just over one second of game time to erase New York’s early 8-0 lead. Brown created 98 touches to Tatum’s 93 on Wednesday, compared to the pair averaging 56.9 and 77.7 respectively last season.

Brown left the game six minutes in with a lead and Tatum almost immediately broke into his pace. Udoka staggered minutes for Brown and Tatum to run the offense apart from each other, and Tatum took the chance to run a 16-second possession between Boston’s stop and Grant Williams’ eventual three. Boston’s first three transition plays averaged three seconds. The next four with Brown off the floor took roughly eight each.

Brown replaced Tatum for the final minutes of the first quarter and restored the breaks, landing a bucket through a foul inside four seconds after Dennis Schröder stole Julius Randle’s pass in the back court. Boston averaged six seconds in transition in the first, converting 63.2% of the shots they took in transition during the game. They scored 1.18 points per possession to New York’s 0.93 on the break.

Boston’s transition time ballooned to 12.5 seconds in overtime and 9.4 seconds in double overtime as 40+ minutes of  opening basketball took the break away from both teams. Derrick Rose, Evan Fournier’s shooting and Randle settled New York in the half court, while Tatum botched a potential overtime game-winner during an abysmal 7-for-30. Brown and Schröder botched key transition shots at the rim that could’ve secured a win, Brown calling his missed dunk following a back court steal on Randle embarrassing after the game.

“It’s a little bit of a mix, balancing it out,” Udoka said. “It did get stagnant, but we felt we had matchups. So we were doing a little bit of both. If I didn’t like it, I tried to slow it down and get us into some of our movements.”

The Celtics established what they wanted to for much of regulation though, with Payton Pritchard, Aaron Nesmith, Romeo Langford and Schröder continuing quick entries into the zone. Boston’s bigs gave the ball to Smart and Schröder following rebounds and stops, forcing Brown and Tatum to run ahead to establish the offense ahead of the guards.

Still, Tatum took the offense to an average 8.2 seconds between gaining possession and the eventual Celtics shot in the second quarter. Udoka felt good about the balance the Celtics struck between isolation play and movement offense. Knicks runs through the middle of the game where Randle and Fournier peppered makes and Obi Toppin and Mitchell Robinson flushed runs to the rim limited the number of transition opportunities the Celtics could even attempt.

Fournier fouled Brown in transition to stop an early third quarter attempt, while Tatum tried trailing on a play soon after to free himself. New York face-guarded Tatum later in the game as Udoka leaned more on Smart and Brown on the ball, making it difficult to find his spots. Udoka saw him get frustrated at times.

“At that point, that’s where he has to become a playmaker and find other guys,” Udoka said.

Then, trailing by 10 early in the fourth, the offense went off the rails. Rose, Toppin and Robinson tortured Pritchard and Schröder to begin the frame. When Smart returned, he entered tunnel vision, staring down the rim on consecutive 10-second possessions. He hit a second-chance three, but otherwise started the fourth 1-for-6 with two turnovers. Udoka needed to call timeout following a possession where he, Brown, Pritchard and Smart struggled to position players where they wanted that ended in an awkward dump-off to Pritchard for a mid-range miss.

“We tried to make a few home run passes, thread the needle,” Udoka said. “Especially in transition, we were really doing well … we knew if we could get stops, we could get out and run, but I felt like we tried to make the home run pass and let them back in the game in the second quarter. Late in the game, I think the fatigue took place a little bit as far as some of the decision-making and shots we missed.”

Pressure defense and more transition plays stormed the Celtics back to force overtime. Brown got an open lane to the basket and finished through Kemba Walker, but it got called back on a charge Udoka didn’t believe he had enough evidence to challenge. A seven-second Tatum break finished with R.J. Barrett blocking him at the rim, showing transition to be no cure-all without the movement the Celtics hope to find as they shot 40% after a 49% first half.

Old habits cost the Celtics on opening night, execution lapses, but a newfound ability to pull Tatum into pace and embrace Brown’s fast break abilities previewed an offense that could be more dynamic in 2021-22.