With Aron Baynes, Al Horford Leading The Way, Celtics Have Poise On Their Side In Game 6 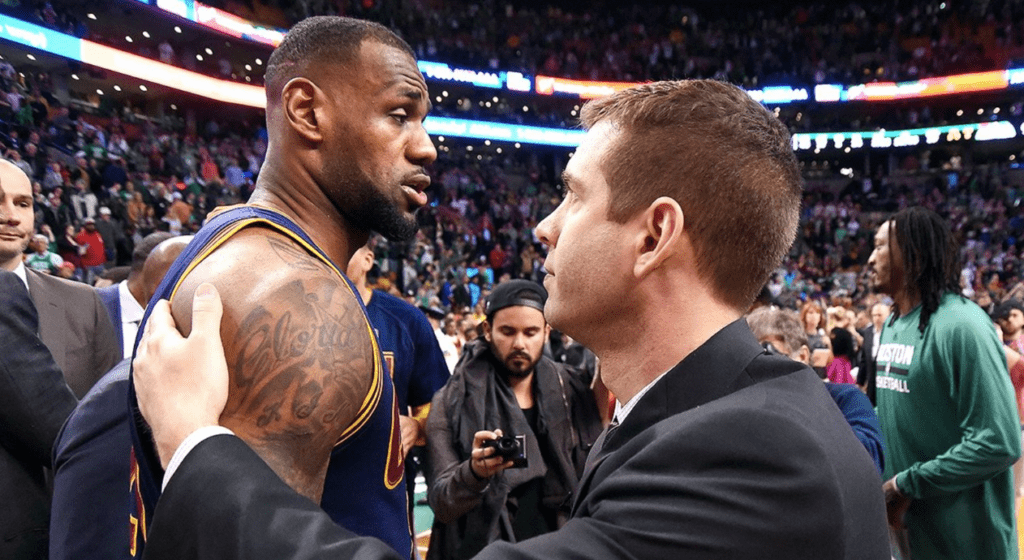 Brad Stevens isn’t concerned about ending the historical NBA Finals run of success for LeBron James. He’s more focused on trying to start some with his Celtics.

The Celtics coach made that much clear Thursday during a conference call with reporters before taking off for Cleveland and Friday’s Game 6 with the Cavaliers at Quicken Loans Arena.

And that effort starts with the leadership of three veterans who have made their presence known throughout this Eastern Finals series. Al Horford, Aron Baynes and Marcus Morris have provided equal parts fire and ice to propel the Celtics to the brink of their first trip to the Finals since 2010.

“Well, first and foremost, with regard to Al and his composure and his poise and kind of a steadying influence, I think that he has a great effect on all of our guys in the locker room, and I think that the deal is you can’t ride the emotional roller coaster. You can’t live or die with every loss or win. You just move on, and you get ready for the next one and you play it as well as you can, and I think one of the strengths of
this team has been moving on.

“We’re going to have to move on from (Wednesday) night’s win, play better than we have to have a chance to win Game 6.”

As for the LeBron legacy factor?

“At the end of the day, it’s incredibly hard to beat a good team in the NBA one time, and our focus is on what we need to do to give ourselves the best chance at being successful tomorrow night,” Stevens said in his best statesman delivery.

Then there’s Aron Baynes, the 6-10 Aussie signed to a one-year, $4 million deal by Danny Ainge last summer. That contract has turned out to be one of the more cost effective moves the Celtics made in building their remarkable run to the Eastern Finals without Gordon Hayward and Kyrie Irving.

“I’d say very early, in the preseason, we played Charlotte with Dwight Howard,” Stevens recalled. “We played Philly with [Joel] Embiid. We played Embiid the third
game of the season, and it became very clear very early that Baynes was one of our better individual defenders. And then I’ve just been amazed at his team defense. I think he’s a tremendous communicator. He’s a tremendous talker. He’s very prideful. He plays to exhaustion. We’ve got a lot of tough guys on our team, but I think
they all will tell you Baynes is one of the toughest we’ve all been around.”

That’s exactly what Stevens wanted and got in Game 5 when he replaced the fiery Marcus Morris with Baynes in the starting lineup Wednesday. Stevens also wanted more flexibility on his bench with Morris and Smart.

But, in the end, Stevens says it could all come down to how hard the Celtics as a team make it on LeBron James. Whether it’s picking him up in isolation 25 feet from the basket or finding the right pick-and-roll to his liking, there’s only so much coaching Stevens can do.

“Obviously there’s a lot of talk about it with the way Houston has played all year, but what gets lost is it’s isolation, but it’s isolation at 25 feet, and you have
to guard all that space,” Stevens said. “You know, it’s not isolation at 12 feet like maybe it was 20 years ago. You know, I think ultimately LeBron has been trying to find his matchups for years now, ever since I’ve been in the league. He’s been great at figuring out who he wants in that pick-and-roll, and if you’re switching, then he knows what to do. If you’re showing, then he really kills you.

“If you’ve got a big that can’t keep up with him, he’ll go downhill at him. And I’ve heard him say before, and you can see it, he’s faced every coverage there is. There’s only so much more there is to do, you just try to mix it up as much as you can throughout a course of a game to try to make it as difficult as you can on him.”

Are the Celtics Too Reliant on 3s?

Are the Celtics Only a Championship Caliber Team When Rob Williams is Playing?