With David Krejci Thriving Will Patrice Bergeron Get Bumped From Bruins Top Line? 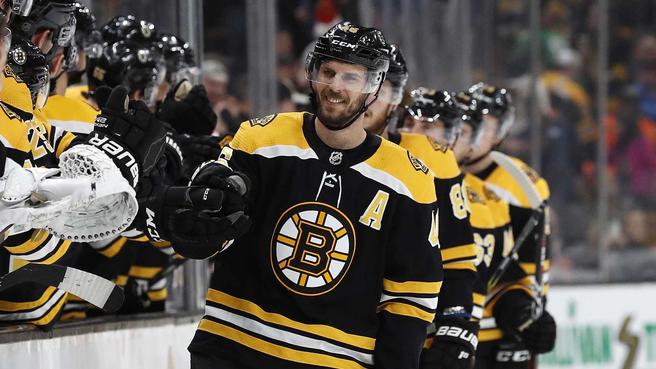 BOSTON, MA — The Boston Bruins having two starting goalies fighting over the net is well-documented. But the Bruins may have another positional battle to deal with. Who will center the top line when Patrice Bergeron returns from injury?

With Bergeron sidelined, David Krejci has been in between David Pastrnak and Brad Marchand on the first line for eight games and the production has been more than impressive. Pastrnak has three goals and 14 points, Marchand with four goals and 12 points and most eye-opening, Krejci with five goals and 11 points, one of those goals coming Thursday night.

To no one’s surprise, Krejci expressed his love for playing with Marchand and Pastrnak to us after Thursday’s 3-1 win over the Anaheim Ducks.

“We’re assuming Bergy’s very close — we know that,” said head coach Bruce Cassidy when asked if Krejci could be moved out of the top line when Bergeron returns. “Whether it’s Saturday or Sunday of next week. Let’s say it is — do we want to upset all the lines to balance it out or just want to drop Bergy back in there and move Krejci? Without DeBrusk in the mix I’m a little more reticent to move Krejci out of there, keep those three together. But that’s something we’re going to have to see how DeBrusk’s progressing on for one. There’s a lot of ifs.

“But yeah, it’s going to be tough but a very welcome decision to have Bergy back in there. Like I said, you can’t lose. Whoever we put in there, whether it be Bergy or Krejci, we’re a better team for it.”

When asked if he wanted to stay with Pastrank and Marchand long term, Krejci took a page out of Bill Belichick’s media playbook.

“That’s out of my control,” said Krejci. “I’m just going to go out there and do what I do and play with the players I’m going to play with and try to create things I’ve been doing the last few games with Marchy and Pasta.”

Despite both being elite, Krejci and Bergeron are two very different centers. Krejci slows the game down and thrives on finesse; Bergeron is a faceoff master who’s north-south game is unrivaled.

After Thursday’s win over the Ducks another productive night at the office, Pastrnak didn’t seem to care who he played with as his center.

“Well, I’m really happy that it’s not my job,” said Pastrnak when asked about Bergeron possibly knocking Krejci off the first line when he comes back. “So, I really don’t know what to say to it. They’re both great players so I don’t really think about it.”

Someone who does have to think about it is Cassidy and the solution may revolve around keeping tandems together rather than full lines.

“Again Jake [DeBrusk] always factors in to that,” said Cassidy when asked about it. “Without getting ahead of myself because, yes we could go in pairs then: Bergy-Marchand, Pasta-David. Where Jake [DeBrusk] goes from there, if he’s in fact playing, that’s where the problems come in. If you split them up now, the third line — we’ve tried to keep those kids together, something’s going to have to give on the other lines but that’s a good problem to have because we want Bergy in the lineup and we want Krejci. That’s our 1A and 1B up the middle. We’ll sort it out from there, which we’ve done all year.

Cassidy’s right: it is coming.

Judging off of Cassidy’s answers, it seems as though it all comes down to where Jake DeBrusk fits within the top six. And with Krejci’s play of late on the first line, the narrative that “Krejci thrives next to good players” is being driven home harder than any right now. That could force GM Don Sweeney to do some holiday shopping for a winger on either side.