With David Pastrnak and Brad Marchand Out, What Could a Bruins Opening Night Lineup Look Like? 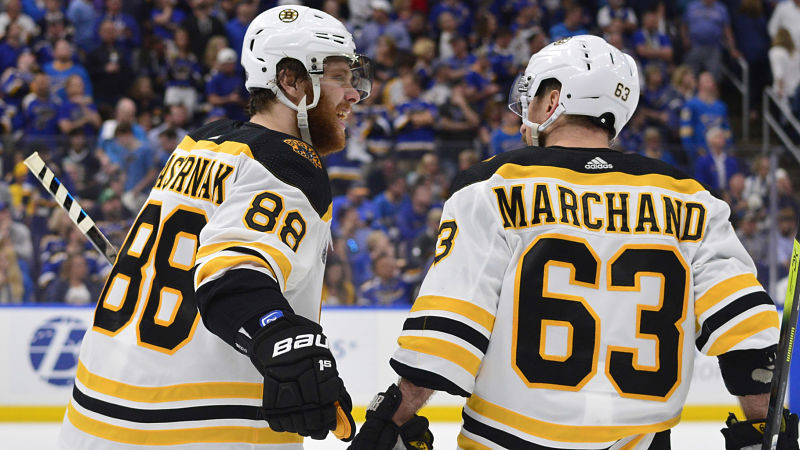 The NHL has announced they plan to start the 2021 season on Jan. 1. Whether or not that’ll actually happen is a complete mystery given the COVID-19 situation, the overall state of the world and the mess 2020 will have left behind.

Maybe once 2021 is rung in, the destruction that was the year before will all be gone. Unfortunately, that probably won’t be the case.

What is for sure is that if the next NHL season starts on time, David Pastrnak and Brad Marchand won’t be on the ice for it due to recent surgeries. Marchand will need four months to recover after sports hernia surgery on Sept. 14, while Pastrnak will need five after a right hip arthroscopy and labral repair.

The start of the season lies less than three months away. Yes, that seems far in the future and yes, there’s still a lot more offseason left for the Bruins to make moves. But that time will fly and judging by how quiet Boston has been during free agency, it wouldn’t be surprising to see them head into next season with the roster as currently constructed.

So, let’s evaluate some potential opening night lineups the Bruins could toss on the ice without their two best wings. This is an opportunity for us to have some fun, get random and throw some ideas around that might be a tiny bit unconventional.

One disclaimer before we get into this: Tuukka Rask and Jaroslav Halak are the assumed goalies in each scenario.

In this case, let’s assume the Bruins are going to re-sign Chara. Th 43-year-old would be best utilized with third-pairing minutes and mostly defensive zone draws. Moving him off the top pairing would allow McAvoy to flourish more offensively with Grzelcyk. He also wouldn’t have to be the one breaking the puck out every time.

If the roster stays as constructed, this would probably be the lineup. Bruce Cassidy would be smart to keep DeBrusk, Krejci and Kase together to let them develop chemistry. Ritchie is far from a permanent solution on the left side of Coyle, but that will have to be the case in this scenario.

On the positive side of things, Coyle and Studnicka showed encouraging signs working together during this past postseason. In 34:27 of TOI together, they put up a Corsi For per 60 of 83.6 with an Expected Goals For per 60 of 3.39.

As for the first line, Bergeron and Bjork have worked together before, albeit for a short time. Smith will most likely play next to Coyle for the majority of the season, but seeing him next to Bergeron will be interesting. The advanced analytics show a player with high offensive capabilities, so moving up next to Bergeron, especially when Marchand comes back, could pay huge dividends since it would allow Pastrnak to play next to Krejci.

In this scenario, Chara is not brought back. Seeing that left side should be enough to get the Bruins to pull the trigger on a trade for a top-four, left-shot defenseman.

As for the rest of the lineup, Studnicka and Smith switched places. Don’t be surprised to see Studnicka get first line reps with Bergeron considering Cassidy compared the two back in July. Studnicka certainly projects to play his career somewhere in the top-six. Pastrnak watching from Level 9 for the first month could be his introduction to such a role.

Smith starting the season on the third line would give him more time to form chemistry with Coyle, which benefits the Bruins in the long-term. All signs point to those two being a great duo on that third line and extremely important once the postseason rolls around.

Frederic on the fourth line would be an interesting experiment. Most Bruins fans would love this because Ritchie is nowhere near this lineup. But Frederic would fit right in next to Lindholm and Wagner. He brings a strong element of toughness while also carrying his weight offensively. Putting Frederic in that role for a while would serve him and that line well.

Frederic would fit better with Kuraly at center instead of Lindholm, however that would mean Ritchie as the left wing on the third line.

Now is where we start to get a bit crazy, especially on defense. With John Moore and Jeremy Lauzon on the roster, it’s hard to imagine the Bruins opening a season with both Zboril and Vaakanainen on the ice. For a team that’s looking for any last chances at the Stanley Cup before the window closes, putting in Zboril and Vaakanainen isn’t the safest move.

Nevertheless, both could have solid training camps and Cassidy might just slot them in. They have the potential.

On the offensive side of things, putting Studnicka on the left side isn’t the best way to utilize the phenom, but playing with Bergeron and Smith would help make up for that. That line could certainly be a dark horse for production.

DeBrusk, Krejci and Kuhlman have all played together before. It always feels as though Kuhlman’s the odd man out and going into next season, that still feels like the case. His versatility, however, does make him unique since he can play anywhere.

As for line three, Bjork and Coyle have been known to work well together. Kase could find himself playing shifts next to Coyle this season if Cassidy finds Smith works better with Krejci or Bergeron. Expect the Bruins to move those two right wings around at times.

This lineup would be met with a collective groan from Bruins fans. Ritchie’s in the top-six, Senyshyn is in the lineup and Moore is playing with Miller.

But, this isn’t a completely lost collection of Bruins. Ritchie would be deployed with Krejci and Kase to create space for them. DeBrusk has played with Coyle before and had some success. Smith would be a solid addition to round out that trio.

Unless Senyshyn has an exceptional training camp, it’s hard to imagine Cassidy slotting the former first-round pick in for a permanent spot. With that being said, Senyshyn will probably get chances throughout the season to crack the roster.

On defense, don’t be surprised to see Moore and Miller together on the third pairing. They’re both veteran players and the Bruins know what they’re getting from them.

In all likelihood, Chara will be brought back at some point. These options don’t include him just so we can look at alternative scenarios. In the case he doesn’t return and the third pairing of Lauzon and Clifton is too inconsistent, don’t be surprised to see Cassidy pair Moore and Miller together in place of the two young guns.

Studnicka could be the answer to Krejci’s right side and in this scenario, he could stick permanently once Pastrnak and Marchand return.

Kuhlman on the fourth line makes sense, as he adds some speed, skill and good play along the boards next to Kuraly and Wagner who are also great when battling for pucks.

The third pairing listed above would actually be pretty good, so long as Miller can stay healthy.

The only big change in this scenario is Studnicka centering the third line with Coyle on the right wing. Both wouldn’t be smart moves.

Coyle’s proven to be much better down the middle and he certainly gives the Bruins more stability when deployed as the leader of the third line.

On Studnicka’s end of things, it’s hard to imagine the Bruins not easing him into an NHL career on the wing. Why throw him into the fire of being an NHL center when the Bruins have no problems in that area at the moment?

Whatever the Bruins end up doing for the lineup to open the season, one thing is clear: it’s going to be hard to replace Pastrnak and Marchand’s production internally.

That makes it all the more imperative the Bruins explore the trade market and try to bolster the top-six.