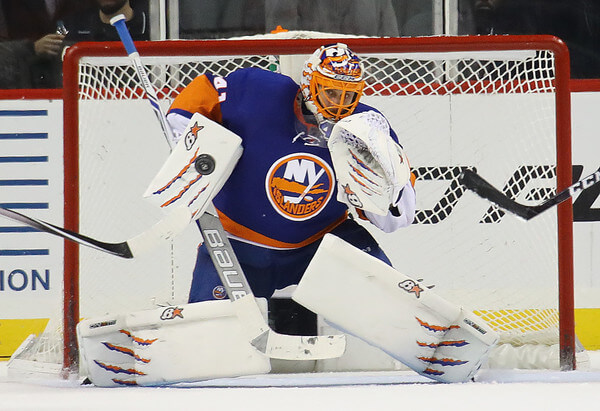 One change for the Boston Bruins this season will come between the pipes. Tuukka Rask is of course the unquestioned number one option. But backing him up this year will be former New York Islanders goaltender Jaroslav Halak, who the B’s signed to a two-year deal on Sunday. Halak will replace Anton Khudobin who signed with the Dallas Stars.

“His action has always been above what’s expected for the most part,” Sweeney said about Halak. “He’s had playoff experience. I just don’t think you can win in this league without having a complement each and every night. You can’t get to where you want to get to. We backed off Tuukka [Rask]’s games last year; it worked out very well.

“Anton [Khudobin] was a great complement, but again, you come out at the start of the season and your number one goaltender is not there, you better be darn sure your backup is.”

Sweeney believes Halak may be able to take some of the pressure off Rask. He went on to voice his expectations for Halak in the upcoming 2018-19 season.

“Vegas got through this year using a bunch of guys, and it’a a testament to their team,” said Sweeney. “But I think, where we sit now, with Jaro’s carried the ball with another team — he’s had months where he’s played 10 games. He’s had usually about 26, at least, starts. That fits in to what we’re trying to expect from what the goaltender tandem needs to happen going forward. We’re a group and maybe it pushes Tuukka even further.”

The Bruins have gotten to the point with Rask where they can’t have him playing over 60 games a season. Last season worked out well with Khudobin playing in 31 games and softening Rask’s workload.

Rask has his best seasons when playing under 60 games. His save percentage went up this past season from the two years prior — two seasons that saw him play 64 and 65 games respectively. His lowest goals-against averages come in seasons when he played under 60 games. It’s no coincidence that Rask’s one Stanley Cup Final run came in 2012-13 — a lockout-shortened season that saw him play in only 36 games.

Another benefit to bringing in a starting caliber backup goaltender is motivation. If Rask ever has a stretch like he did to start last season, Halak could easily take the reigns as starter for as long as the Bruins need him.

At any rate, Rask will most definitely see his starts cut down this year and ultimately, it’s the best thing for everyone. The more fresh Rask is come April, the better.