With Leadership Of “The Legend” Patrice Bergeron, Bruins Have Nothing To Fear In Game 7 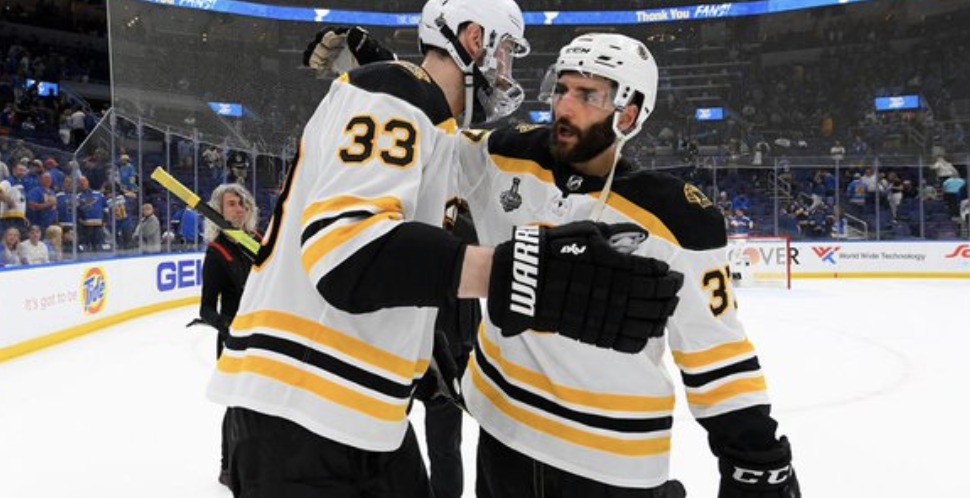 ST. LOUIS — It’s no secret that Patrice Bergeron will end up in the Hockey Hall of Fame. He is arguably the best two-way forward of his generation and the best in the 95-year history of the Bruins.

He has four times earned the Selke Trophy, given annually to the best defensive forward in the game.

He netted the game-winning goal in the first period of Game 7 of the Stanley Cup Final in 2011 and played through a broken rib, punctured lung and separated shoulder in the near-miss of 2013.

Bergeron, who turns 34 July 24, has played 15 years in the NHL. What he did Sunday night before Game 6 stands as one of his most memorable moments in a career filled with them. He delivered a pep talk to his mates facing a 3-2 hole and Stanley Cup playoff extinction in an arena only too ready to put Boston in hibernation and hoist their first-ever Cup.

“Just the thought of it being over was terrifying,” said Charlie McAvoy, who responded to Bergeron’s words by making the play of the game, tapping an airborne puck into the back of Tuukka Rask midway through the second period, with the Bruins clinging to a 1-0 lead.

“Patrice stepped up. He stepped up big time tonight,” said McAvoy. “It’s within us [was] the gist of it. But it was exactly what we needed. It was an element of what the dream is growing up, everyone of us shares the same dream. Kind of just bringing us all to a point where we could all be on the same page. We were all a little kid once and we all wanted that.

“I think it was just an element of savoring this moment and not letting it end. It was exactly what we needed. When he talks you listen. That’s the presence that he has. I thought we stuck to what’s been good to us all year and these playoffs,” Bergeron said. “Took care of the puck. I thought we played well defensively and smart and we capitalized on our chances.”

In typical Bergeron fashion, he didn’t focus on his pregame words but rather the work of his teammates.

“Of course you’ve got to rely on your experience in these games. You need to know what’s coming and obviously we expected a big start from them and I thought we managed that pretty well in getting that first goal. It was huge.”

The Bruins showed more than enough presence Sunday, riding the storm out through a tense first 40 minutes and pulling away to a 5-1 win at the Enterprise Center, forcing the first-ever Game 7 in Boston to crown a Stanley Cup champion.

“He’s a legend. He said some words that I don’t know if he necessarily wants me to repeat,” said Jake DeBrusk, who played an active game on the line with David Krejci and Karson Kuhlman. “They weren’t bad words. It was just about what we all dream about doing. Everyone that grows up playing hockey dreams of being in this moment. It was something along those lines and to see him set the tone that way wanted us all to run through a wall.”

“We’re a family. We believe in each other and we all love each other,” said McAvoy, who posted a team-leading five hits against the so-called heavier Blues. “We’ve come all this way and we really come together when it matters. I think (Game 6) was just a good example. We’re thankful (and) we’re blessed for a chance to play in Game 7 now. It’s gonna be the same thing. It’s a roller coaster and you’ve just got to ride it.”

Bergeron was in front of Jordan Binnington when Brad Marchand’s ripped a one-timer on a perfect pass from David Pastrnak to capitalize on a 5-on-3 power play and put Boston up, 1-0.

“We’re fighting for our lives,” said Marchand. “When you play desperate, normally you see everyone’s best game and I think that’s what we had. [Tuukka Rask] obviously made the big saves when we needed them. But we were able to rely on everyone.”

Bergeron was the leader of the leaders Sunday. But it wasn’t just Bergeron who showed it. Bruce Cassidy said the likes of Krejci, captain Zdeno Chara, Marchand and Tuukka Rask have all shown leadership qualities in a remarkable postseason run that comes to an end Wednesday night.

“Tremendous,” said Bruins coach Bruce Cassidy. “I believe those veteran guys come in handy for the game, they’ll come in handy [on Monday] and Tuesday for us. We’re gonna have to live with a bit of what St. Louis did today. Now you’re going home, the Stanley Cup is in the building, someone’s winning. You’ve got a lot of new friends all of a sudden – or old ones are coming out of the wood work. I think the message, they’ve been good at that, stay in a bubble. Take care of your immediate family, but catch up with your friends on Thursday type of thing.”

Bergeron, more than anyone in Black and Gold, knows Sunday was only half the story. For this story to have a happy, deserving conclusion, the Bruins need to keep Bergeron’s words from Game 6 fresh in their minds when they take the ice Wednesday night.

“We are a hell of a group, been through so much the whole year, worked together, one for the other the whole season,” said Pastrnak. “We’ve become an unbelievable family. Our job is not done.”