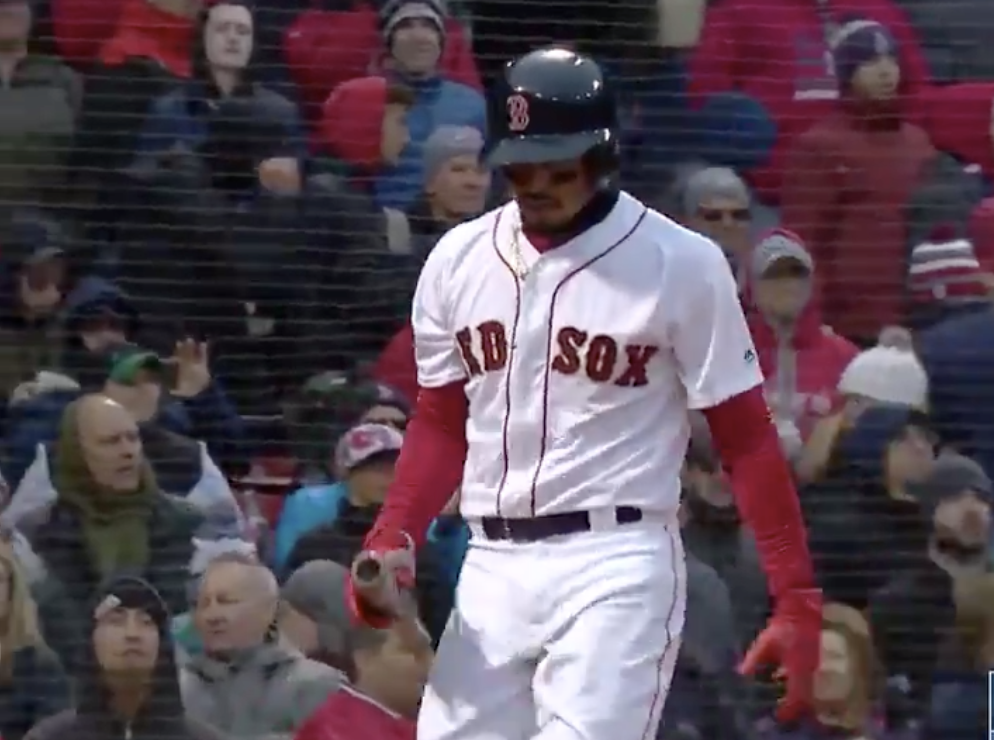 BOSTON — They’re just too good to be this bad.

The Red Sox are off to a start as miserable and cold as the dreary conditions at Fenway Park during their home opener on Tuesday.

Mookie Betts, despite three homers and 12 hits in the first 12 games, hasn’t shown that 2018 MVP form at plate, as shown in his ninth-inning at-bat Tuesday with the tying runs on base and two out.

“I do feel we need to get back to (attacking) pitches in the strike zone,” manager Alex Cora told me after the 7-5 loss to Toronto on Tuesday. “That’s something we did a good job of last year and so far we haven’t done that.”

Rick Porcello has lost both of his starts and has a 13.50 ERA in just 7 1/3 innings. David Price is 0-1 in two starts, despite driving in a run last Saturday at Arizona. Christian Vazquez allowed two passed balls in a single inning Tuesday and is batting .185 and is part of a catching combination with Blake Swihart that has thrown out just one of 10 attempted base stealers.

The Red Sox are collectively 3-9 with a 6.35 ERA, allowing opponents to hit .280 against them while hitting just .237 themselves as a team.

Brock Holt got poked in the eye by his two-year-old son and Jimmy Kimmel and the nation had a laugh at his expense.

By any measure, it’s been a woeful start and all of the above explains why the Red Sox sit all alone in the AL East basement after 12 games.

But here’s the good news: None of these are projected to last. They are all anomalies.

Sure, Sale might be fighting something physical to start the season and it might take several starts or weeks to find his rhythm. But that’s hardly reason to worry about it continuing all season and, right now at least, not sufficient reason to question the Red Sox extending him five years to anchor an experienced pitching staff heading into the next decade.

“3-8 on the road. Last game, even though we didn’t swing the bats well, it was a good team effort. The bullpen, grinding out at-bats. Xander making a good play on the contact play (in Sunday’s 1-0 win in Arizona). He didn’t panic. Made a good throw to the plate. We got the guy out at the plate. We stick with the plan and it worked.”

That’s precisely why Red Sox fans shouldn’t be pounding the panic button. Maybe twitching a bit over it, sure, but this team and its vast organization of analytic experts have invested way too much time and resources to think they’re going to be freaked out over winning just three of 12 games during any stretch of the season.

The Red Sox starters, not their bullpen, has been at the heart of the pitching problems. But ask any GM in baseball and they’ll tell you that with a rotation of Sale, Price, Eovaldi, Porcello and Rodriguez, it’s just a matter of time before they (with the help of an expert coaching staff) all figure it out. You’re not investing the kind of money the Red Sox have without having a great deal of confidence that your money players will pay dividends by the end of the season.

The Red Sox lead all teams with a $225 million payroll, thanks to a starting-5 rotation that accounts for $88 million. They’re also atop the tax payroll leaderboard at an estimated $238 million, some $32 million north of the cap.

This is not whistling past the graveyard. Nor is it putting rose-colored glasses on a gloomy, dismal start. It’s simply taking a look at the roster and its very recent accomplishments, including 119 wins and a World Series trophy.

Teams built like the Red Sox are not about to dissolve into irrelevancy overnight. And this one won’t be allowed to. That’s 90 percent of the battle in Major League Baseball today.