With Richard Seymour in the Patriots Hall of Fame, Canton Should be Next 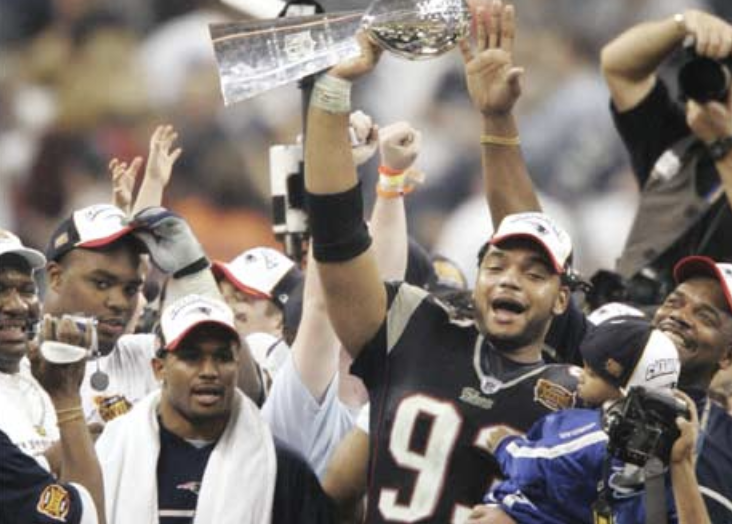 Richard Seymour earned his rightful place Monday when he was chosen by fans as the 28th player and 30th member of the Patriots Hall of Fame.

But that shouldn’t be last Hall of Fame for the 2001 first-round draft pick of Bill Belichick. Richard Seymour belongs in Canton as one of the very best and most versatile defensive linemen of his generation.

The Patriots defense of the 2000s may not be considered in the company of the Steel Curtain or the Doomsday Defense of the 1970s, the 1984 Niners, the ’85 Bears, the Lawrence Taylor Giants, the 2000 Ravens or the Legion of Doom in Seattle in the mid 2010s.

But it should be. Consider the names on the defenses that won three Super Bowls in four years from 2001-04: Lawyer Milloy, Ty Law, Tedy Bruschi, Willie McGinest, Mike Vrabel, Ty Warren, Rodney Harrison and Ted Johnson. And Richard Seymour. Those names struck absolute fear and indecision in the mind of Peyton Manning, the Patriots’ only real rival during their run of AFC dominance in that eight-year span.

Seymour was arguably the linchpin to everything Belichick was cooking up in terms of transitioning from a 4-3 front – where Seymour played as a tackle in his first two seasons – to a 3-4 base, essentially the primary defense of the Patriots defenses for the remainder of the decade.

“I remember when I was being recruited out of Georgia, I remember the scout Lionel Vital,” Seymour told me. “He came to Georgia and he was telling me about the 3-4 defense and he was asking me could I do it. At that point, I didn’t even know what a 3-4 defensive end was, to be honest, but I was like, ‘Yeah, I can do it.’”

He immediately established himself as one of the team’s premier players and helped the Patriots win their first Super Bowl during his rookie season. During his time with the Patriots, he anchored a defense that allowed an average of 17.8 points per game and fewer than 20 points per game in six of his eight seasons with New England. Seymour also blocked a franchise record six regular season field goals in his career, plus one in postseason play.

Like with Vince Wilfork, here’s the question you need to ask about judging linemen in a Bill Belichick defense: Did they allow the rest of the defense to excel? In other words, players up front were the reasons players like Willie McGinest, Ty Law, Rodney Harrison and others were able to record sacks, interceptions, tackles or forced fumbles. And like with Wilfork, Seymour’s presence on the line often drew double-teams.

He played in 13 games in his ’01 rookie season, starting 10, totaling three sacks. Seymour missed the season opener against the Bengals as well as two late October games with a leg injury. But when the lights were the brightest, he played big, and Belichick could sense this very early in Seymour’s career. In Super Bowl XXXVI, Seymour started at defensive tackle and earned a Super Bowl ring for the Patriots’ victory over the Rams.

“Obviously, you go back, you look at Coach Belichick and what he’s meant to defense, and to be drafted by him says a lot,” Seymour said. “So, I just wanted to come in and absorb as much information as I could. I knew I was coming to, at that time, a veteran team. Like I said, I was in really, really good hands with Coach Belichick, with Romeo Crennel and all of the coaches there. I mean, they really made the transition super easy for me.”

While the Patriots were suffering a Super Bowl hangover in 2002, Seymour started all 16 games as a 4-3 defensive tackle, collecting 5.5 sacks and an interception en route to his first Pro Bowl. Seymour also had a big impact on special teams, blocking field goals in back-to-back November games against the Raiders and Vikings.

With the Patriots defense moving to a 3-4 in 2003, Seymour moved outside to defensive end in the scheme and was also named a defensive team captain for the first time in his career. Despite missing a game against the Broncos in October due to a leg injury, Seymour finished with a career-high eight sacks and 57 tackles in 15 games played (14 starts).

He was twice named AFC Special Teams Player of the Week, after blocked field goals against the Dolphins in Week 7 and the Titans in the divisional playoffs. Seymour and the Patriots would go to win their second championship in three years, defeating the Panthers in Super Bowl XXXVIII.

Seymour was elected to the 2004 Pro Bowl and was a first-team All-Pro selection following the season.

“Richard Seymour laid the foundation for a defense that helped propel the Patriots to three Super Bowl championships in his first four seasons in the NFL,” said Patriots Chairman and CEO Robert Kraft in a statement Monday. “Richard was the consummate professional and leader, always accepting the roles he was assigned, putting team goals ahead of personal ones, and in turn, raising the game of everyone around him.

“Yet as great as he was as a player, he is a Hall of Fame-caliber person, as well. I couldn’t be happier for Richard and the Seymour family, and I am looking forward to celebrating with them as Richard takes his rightful place in the Patriots Hall of Fame and very soon the Pro Football Hall of Fame in Canton.”

Seymour spent the first eight seasons of his 12-year NFL career with the Patriots and played an important role in delivering six division titles, four conference crowns and three Super Bowl championships to New England. He was named to five straight Pro Bowls with the Patriots (2002-06) and earned three straight first-team All-Pro honors (2003-05).

His five Pro Bowl berths are the most by any Patriots defensive lineman since the 1970 NFL merger. He was also a four-time team co-captain. In 2009, he was voted to the Patriots 50th Anniversary Team and the 2000s All-Decade Team. Seymour has been a finalist for the Pro Football Hall of Fame for the last two years. Now Seymour and his Pro Football Hall of Fame proponents don’t need to answer that nagging question.

“I think it definitely made it difficult because some writers could easily say, ‘We can’t put him in the Pro Football Hall of Fame honestly until he’s in the Patriots Hall of Fame.’ But, I’ll be in now, so we’ll just deal with that,” Seymour said. “It’s a tremendous honor. It wasn’t anything that I ever thought about in terms of why I played, in terms of being a Hall of Famer. I just wanted to go out and compete and earn the respect of my teammates and also the opponents that I played against.

“That’s really where my mindset was. I might have said it a while ago, but I think it’s a difference between stats and impact – having your impact on the game and imprint of offensive coordinators having to play against you. I think I earned that. I’ve talked to a lot of offensive linemen throughout the years and earned their respect, and I think that goes a long way in not only the Patriots Hall of Fame, but down the road hopefully the Pro Football Hall of Fame. It’s all a blessing and honor.”

Kraft is right. As great a player as Seymour was, he had even more character among the teammates that played with him and the coaches that coached him. He had enough confidence in his ability that he wasn’t afraid to push for what he thought he was worth, even if it meant going up against Belichick, something that was brewing after the team’s third Super Bowl win.

Entering the final year of his rookie contract, Seymour held out of the 2005 offseason minicamps and missed the first four days of training camp in hopes of securing a new contract. While the Patriots did not fulfill Seymour’s request, they did give him a pay raise for the 2005 season in order to end his holdout. In April 2006, Seymour signed a three-year, $30 million contract extension through the 2009 season. But that would be the last contract he would sign with the Patriots and he wouldn’t see it to its conclusion in Foxboro.

Seymour was dealt to Oakland days before the 2009 season opener and was reportedly so blindsided by the trade that there was doubt as to whether Seymour would even report. But eventually he did, starting all 16 games for the Raiders.

“Al Davis said he traded for me, so that’s the way I look at it,” Seymour said with a grin. “At the end of the day, like I said, the amount of respect I had for Coach Belichick and still have to this day – there’s a difference between business and your personal life. Personally, it was always a ton of respect. Coach Belichick, he would always send a Christmas gift to the kids and little things like that.

“In terms of the business side of it, I mean, that’s just the business side of the NFL. We saw that this year with all their guys. So, that’s a part of it. I don’t have any hard feelings or anything like that. That’s just a part of the way the NFL works. So, it may have seemed like it was some tension or something, but in my mind, it’s no hard feelings. We talk and we see each other. He’ll shoot me a text. I was down there when the team was here in Atlanta for the Super Bowl. I was with the team. So, all is well.”

With that out of the way, maybe Bill can pen a letter, email or text to support Seymour’s place in Canton.