With sheer humility and great genes, Shane Larkin relishes his chance with the Celtics 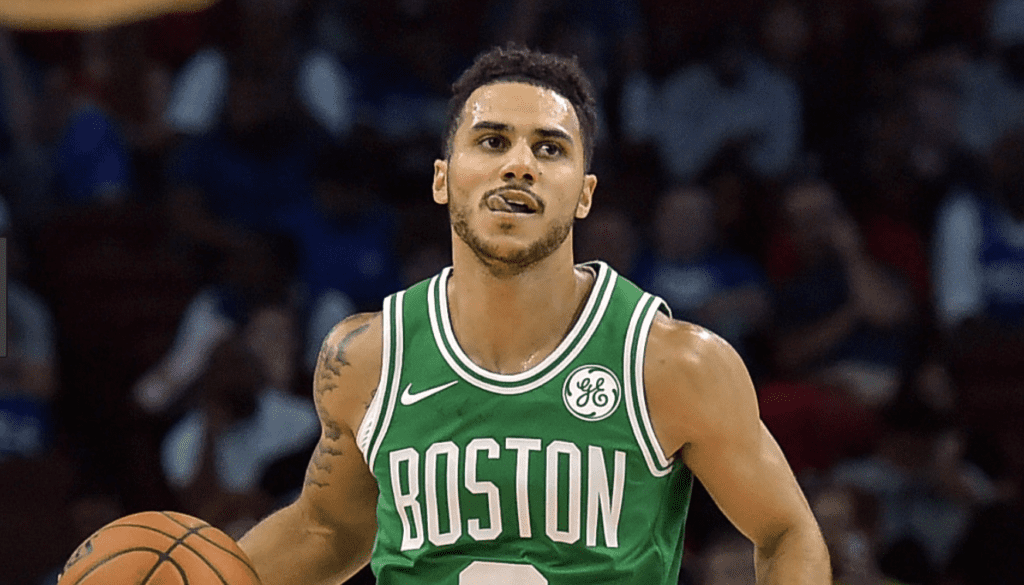 BOSTON — Shane Larkin remembers the first time the Celtics turned to him this season.

The situation could not have been more shocking to the Celtics players, management or fans.

Gordon Hayward had just gone down with a gruesome left ankle injury five minutes and 15 seconds into the season opener in Cleveland on Oct. 15. While everyone was in a state of shock for several minutes, Brad Stevens still had to coach the game.

And who did he turn to? The guard who signed a one-year, $1.5 million dollar contract with the Celtics on July 31 to serve as a depth guard on Stevens’ bench. He played five minutes in that game but nearly 20 minutes in Boston’s first two wins of the season at Philadelphia and at home against the Knicks. That experience early in the season proved to him he made the right decision in choosing Boston.

“They were big,” Larkin told me of the early-season minutes. “Some guys have to wait around a long time to get those opportunities and you’ve got to stay ready and stay patient. But luckily for me, that came early in the season. First night, obviously the horrific injury to Gordon happened, and you never want to see somebody go down like that, especially after all the excitement he brought to the team and the experience and the talent that he brings. But you always to be ready for things like that. He went with me as soon as that happened.

“I just knew from that moment on, I had to be ready on any given night, based on what team we were playing and the situation. From then, I just tried to stay on the bench and whenever my name is called, go in there and make impactful moves.”

Larkin, 25, is averaging 3.5 points in just over 11 minutes a game, playing in 37 contents so far on a team that is tops in the East. That’s light years from playing for the Mavericks, Knicks and Nets to start his career.

To know Shane Larkin is to know his background. His family is among the most athletic across all sports in America. His father, Barry was a starting shortstop for the Cincinnati Reds in their second heyday in the 1990s, which included a World Series title in 1990. He is enshrined in Cooperstown. His uncles are nearly as accomplished and bright. Mike was a captain of the Notre Dame football team in 1985. Byron was an all-American guard for the Xavier Musketeers and Stephen was a baseball star at the University of Texas and also made his way to the Reds for a brief stay.

“It’s pretty amazing, just the genes, for having all my uncles be successful in the sports they play. Obviously, my dad was a hall of famer. It just goes to prove that they put in the work when they were young. Nobody is given anything ever. They had to work everything they got. They’re extremely hard workers. Their parents raised them the right way to grind for everything you’ve got. My dad kind of instilled the same values into me. You don’t see a lot of 5-11 guys in the NBA. So you’ve just got to put the work in and that’s something I learned from all my uncles and it’s gotten me to the situation where I am now.”

The Larkins were raised in suburban Cincinnati, in a middle-class section. Work ethic and humility were weaved into the fabric of their family. It’s those traits that father Barry made sure Shane would take with him wherever he went.

“The biggest thing he’s ever preached is just to stay humble and expect to be great,” Larkin said of his dad’s best advice. “That’s the thing he’s always instilled in me. I’ve always put the work in to be great. So I’m just going to continue to work and see where I go.”

When Barry moved the family to Orlando later in his career, Shane became a Florida high school star guard at only 5-foot-11. He was eventually recruited by Miami Hurricanes coach Jim Larranaga and his relationship with another accomplished sports family began. Celtics assistant Jay Larranaga, who worked with Larkin before Wednesday’s game against the Knicks to test his sore knee, is Jim’s son.

“He’s been around for a while,” Larkin said of Jay. “I was down there in school and I saw him a few times and talked to him a few times. In my first couple of years in the league, I always saw him around. There’s a strong connection between me and the Larranaga familiy. I wasn’t a high-level recruit when Coach Jim Larranaga was recruiting me out of high school. He really believed in me and was the first person to give me an offer. It goes way back to when I was 16 years old, that relationship. I’ve known them for nine years now and I have a great relationship with the entire family.”

Larkin played just two seasons at Miami but they were spectacular seasons. He was chosen by coaches as ACC player of the year as just a sophomore in 2012-13. He then declared for the NBA Draft and was taken by Dallas. He spent his first three pro seasons playing for three different teams (Mavericks, Knicks, Nets) before dropping out of the league all together last year. Then he recommitted himself to getting back in this past summer. The right player met the right opportunity when Danny Ainge came calling in late July.

Larkin signed his one-year, $1.5 million deal right in the middle of the signing of Hayward in early July and the Aug. 23 trade of Isaiah Thomas.

“I knew there was going to be an opportunity here at that time because of Isaiah’s injury,” Larkin said. “So, I knew there was going to be some playing time available to work in and get with Coach Stevens on a very proven team and a proven coach and get some winning experience under my belt. Then obviously, the whole trade happened and I just look at it as an advantage, an opportunity to go out there and continue to work, continue to get better and learn from great players, great coaching staff and try to make an impact whenever I get my opportunities.”

“I feel like I was in some situaitons early in my career where the outcomes of my teams or the teams I was on wasn’t the greatest and it kind of made it look as though I wasn’t an impactful player. So, being able to make impact plays on a team that’s one of the top 5 record-wise in the league right now, I’m grateful for the entire thing. I’m glad that Danny took the chance on me and I’m glad that I’ve been able to prove myself.”

“He’s excited about the opportunity to be back in the NBA,” Brad Stevens added. “He knew our situation where we had a bunch of guards. When he decided to come here, it was before the trade and we still had Isaiah and Marcus and Terry so he knew there would be times where he wouldn’t play as much but he also knows in this league, you always get a shot and he’s made the most of it.”