With state-of-the-art training complex, will a new Revolution stadium be next in Boston for Krafts? 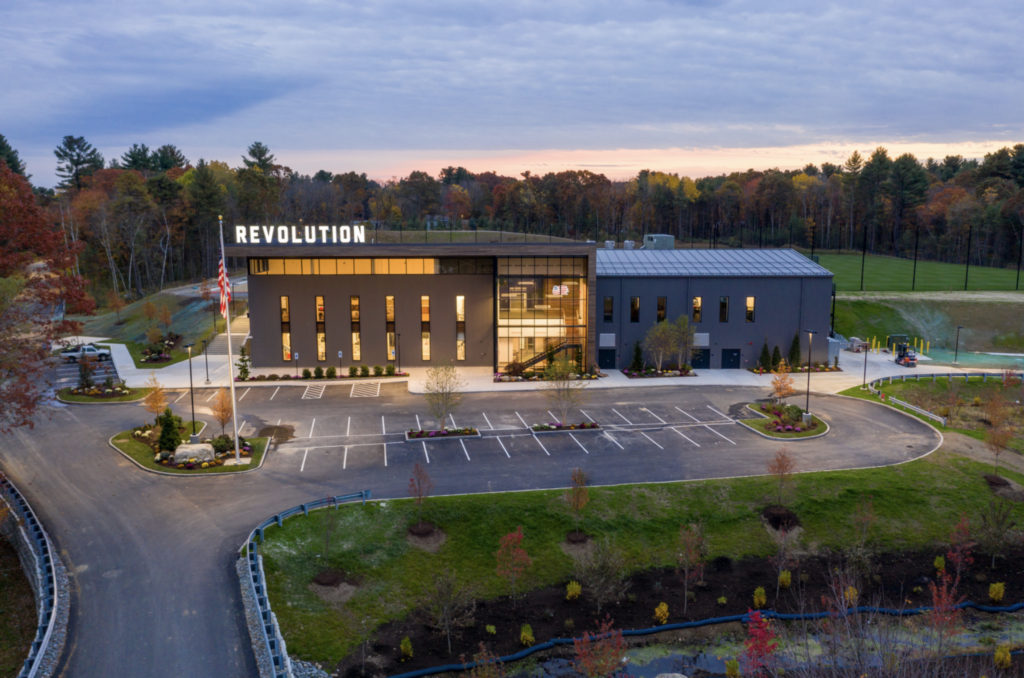 FOXBORO – The Kraft family has taken its next bold step toward making the New England Revolution a destination for some of the best soccer players in the world.

The club Monday officially unveiled its new $35 million Revolution Training Center in the beautiful woods in the shadows behind the south end of Gillette Stadium. Team owners Robert Kraft and son Jonathan were joined by President Brian Bilello and Sporting Director and Head Coach Bruce Arena at 1776 Revolution Way to cut the ribbon on the $35-million complex.

Spanning 68 acres in the wetlands behind Gillette Stadium, the world-class facility features a 30,000-square foot headquarters and three natural-grass fields that serves as the new home for the Revolution MLS team, Revolution II, Revolution Academy, technical staff, and front office.

It was a facility that was years in the planning stages, including a detour for the pursuit of a new soccer-specific stadium in Boston for the Revs.

“We now have a facility that’s worthy of the coach we have and our desire to win a championship so that we can bring (in) people from all over the world,” Robert Kraft said. “This is something where we can compete with anyone and the top clubs in MLS have facilities that rival this. I think this is better, though.

“It’s a little later than we would have liked it to happen. To be very frank, we were working on getting a stadium in the city (of Boston). It’s taken us a little while. As you know, things take a little longer to happen here.”

Added son Jonathan, “hopefully sometime, while we’re still all walking this Earth, we will be at a similar event announcing a stadium, too.”

“This is the best training facility I’ve ever been at in my career. Things weren’t great at the L.A. Galaxy like you’d like to believe. We didn’t have great training facilities or day-in, day-in environment like this. This is special. When I was at New York Red Bulls, we’d used to drive in our cars and look for practice fields. This is as good as it gets.”

The heavy rains that fell Monday did little to dampen the spirits of everyone in the organization or the dim the brilliance of what the Revolution can now offer as they look to bring top-tier MLS talent on board, in addition to designated player potential and the development of homegrown talent on their USL and Development Academy rosters.

“It was critical because everyday environments are critical to your overall success. It’s all part of building a culture and track players and having a culture every day at your club where players are motivated,” Arena told me. “They come to work every day and they see this and they want to be part of it. Again, we’re going to tell them there are no excuses that you can’t get better. We’ve created an environment that also sends a message to players and the community that we want to win championships here.”

“We had been so focused on the (Boston) stadium and now we’re sort of re-focused on it, that we kind of put the training center aside,” team president Brian Bilello said. “Then we realized we were falling behind in MLS, in terms of what was being built, what teams had. We didn’t want to wait and wait. We decided to move right away on this. Nothing even close to this could have been anywhere close to Boston.

“The facility does not represent us staying in Foxboro from a playing games standpoint for a long period of time, hopefully. It’s really about having a permanent training home where we could build a best-in-class facility and we knew this was the best place to be able to do that. We’re still fully committed to trying to build an urban stadium and working diligently on that process. I don’t have a timetable on that right now but that’s still our number one priority to get that done.”

In addition to the First Team’s expansive new locker room, which exceeds 1,200 square feet, the USL League One side and the Academy also have their own dedicated locker rooms in the facility.

“As much as he’d like to see a stadium built, he felt that a world-class training facility really mattered. I think he was pleasantly surprised that when we hired him, this was three-quarters built and he got to put a stamp on it.”

The complex boasts three natural grass training fields, including two newly constructed fields abutting the facility designed solely for First Team use and just steps away from the locker room. A third field, originally opened in August 2017, is now dedicated to the Revolution Academy. The north-most First Team field is equipped with the latest in field-heating technology, a 15-million BTU glycol-based heating system that was custom designed for the club. More than 31 miles of three-quarter-inch tubing snakes beneath the playing surface, providing unrivaled temperature management allowing the club to train outdoors all year long.

The Revolution broke ground on the 68-acre parcel in October 2018. With much of the land consisting of wetlands and riverfront under local, state, and federal protections, the club took great care to preserve and embrace the site’s natural New England aesthetic. Construction involved efforts to restore and preserve the natural environment.

Specially engineered soils and native wetland and upland seed mixes were used to minimize the impact on any developed land. In total, the club replanted more than 350 native trees, 550 shrubs, and over 1,000 grasses and herbaceous ground cover plants on the property. As a result, the Revolution Training Center is one of the most stunning and serene professional training grounds in sports.

Embracing the area’s densely wooded aesthetic, the Revolution’s new home blends seamlessly into the surrounding New England environment and the region’s fingerprints are evident throughout the complex. The wood used on the interior and exterior is thermally modified poplar sourced from New Hampshire. The 36-foot long dining table in the players’ lounge was sourced from a single 80-year-old maple tree that fell during Hurricane Irene in Western Massachusetts, then salvaged and fabricated by Saltwoods of Watertown, Mass.

The Revolution First Team will convene at the training center in January to commence preseason training ahead of the original MLS side’s 25th season. New England will open the 2020 season away from home on Saturday, Feb. 29 at Montreal (3:00 p.m. ET), followed by the Gillette Stadium home opener on Saturday, March 7 vs. Chicago Fire FC (1:30 p.m. ET). Season Memberships for the 2020 season are now on sale starting at $29 per month.