With Steve Pearce Crushing The Yankees, Red Sox Destroying All Adversity In Their Path 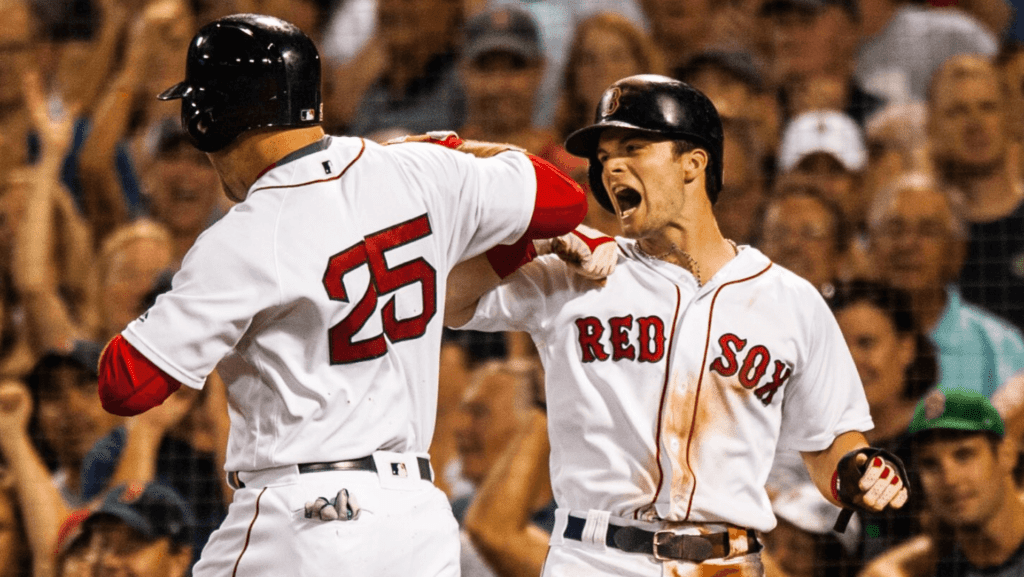 BOSTON — Another test, another resounding response from the Red Sox.

The Red Sox have been flying through the 2018 season at breakneck, historic speed. Heading into the first of four with the Yankees, they had racked up a major league-leading 75 wins, matching the 1946 group for the fastest to 75 (108 games).

Steve Pearce crushed three home runs, drove in six, Mookie Betts had four hits, Jackie Bradley Jr. had the best recovery slide of the season at home plate and Ian Kinsler – with a pair of spectacular defensive plays in the seventh inning, showed why Dave Dombrowski is having a special season as general manager. All of that, and an eight-run fourth, added up to a 15-7 thrashing of the Yankees at Fenway that expanded the Red Sox lead in the AL East to 6.5 games.

But take a step back for some perspective first.

Their ace is the clear leader after four months for the American League Cy Young award. They have not one, but two legitimate MVP candidates. Every move from their president of baseball operations has been spot on, starting with the hiring of a new manager and waiting out the best free agent value on the market.

And their first-year MLB manager has pushed just about every right button in his maiden voyage as a big league skipper.

In other words, the Red Sox have faced little true adversity in a season that has them on pace for their first 100-win season since 1946. Mind you, the lack of minefields in their path is hardly their fault. Lots of teams would like to not be tested and stand 41 games over .500.

But an hour before Tuesday night’s game Chris Sale held a press conference in the media workroom at Fenway to try and calm the fears of those Red Sox fans who were digesting the news that he was heading to the 10-day disabled list with a sore left shoulder.

“There’s a lot of work that went into keep me fresh,” Sale said. “Not only myself but everybody, and it’s frustrating not to be able to go out there. These are things that happen in this game, unfortunately. You’ve got to deal with. you’ve got to face it sometimes. Just keep my chin up, keep working and I’ll be back out there.

“If this was something more serious, I would tell you. We’re not hiding anything. This is nothing that we’re worried about. This is a concern at most. It’s not something anyone deemed serious to get an MRI. Just a little soreness in the pitching arm, take some Advil, get it rubbed down and get it ready to go.”

Just four hours later, Xander Bogaerts was taking some pain killers after he took a fastball off the same area of his right hand that shortened his 2017 season last July. The Red Sox dropped a 3-1 game to the Phillies that had the feel of their most concerning night of the season.

The Red Sox opened play here at Fenway Thursday night just four games ahead of the Yankees in the loss column. Alex Cora gave his medical update beforehand, letting everyone know that they are still hopeful of a Sale return Wednesday in Toronto, Rafael Devers is making good progress from his left hamstring injury and Eduardo Rodriguez is coming along nicely with his right ankle sprain and is in line to throw a bullpen on Sunday.

But the way Thursday’s game began instilled a little bit more concern among Sox fans. Brock Holt, starting for the dinged Bogey, booted a grounder at short. Then Mike Stanton drilled a 119.1 MPH liner to center for a single. That was followed by the first left-hander to homer off Brian Johnson ever as Didi Gregorius launched one to the Red Sox pen in right. Boom. 3-0 Yankees. Johnson surrendered a solo opposite field shot by Aaron Hicks in the second and it was 4-0.

Suddenly, the footsteps of the Yankees, winners of five of the first nine games between the two this season, were getting louder and louder.

But the Red Sox did what they’ve done all year. Chip, chip, chip and then the boulder splits apart. The falling apart came in the form of C.C. Sabathia and Jonathan Holder. Sabathia couldn’t protect a 4-0 lead and lasted just three innings, taking a liner off the bat of Blake Swihart.

Holder couldn’t retire any of the seven batters he faced to open the fourth, as the Red Sox began torching the Yankee bullpen. Eight runs later, the Red Sox had a 10-4 lead. That’s how these Red Sox respond to adversity.

Steve Pearce has been a brilliant midseason acquisition by Dave Dombrowski. He became the third Red Sox slugger this year and the first not named Mookie Betts to homer three times in a game.

If you’re looking for a reason not to worry about Chris Sale on the DL, Xander Bogaerts’ bruised right hand, David Price at Yankee Stadium, the setup men for Craig Kimbrel and Alex Cora managing for the first time in October, look no further than that relentless fourth inning Thursday night.

Against a bullpen that hadn’t allowed more than six earned runs in a game this season, the Red Sox scored eight in one inning. The Red Sox know full well what it means to win the division and avoid a one-game roulette wheel in October.

There is one thing that could use some serious improvement – base-running. Another blunder happened again Thursday when J.D. Martinez wandered too far off second base in the third inning on a routine grounder to short. He was easily picked off and it killed a rally against the fading Sabathia.

But, as has happened all season, that mistake was more than erased in the next inning by an eight-run explosion. Ironically, the Red Sox ran wild on the Yankees in that inning, featuring a spectacular head-first slide into home, the first of two runs he would score in the inning.

Like with everything else, the Red Sox will probably find a way to fix that too come October.