Without 1-and-dones, Villanova is all about winning culture under Jay Wright 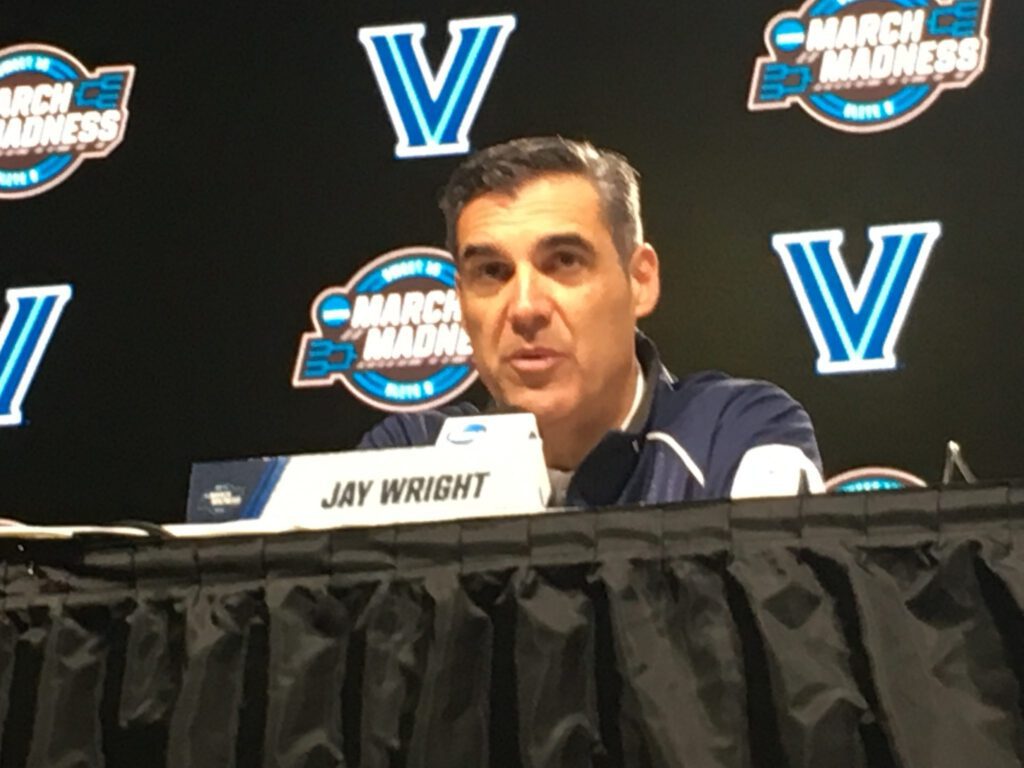 BOSTON — Villanova is the modern-day Duke. Wildcats coach Jay Wright is building the same type of program that Mike Krzyzewski built starting in 1980. Duke had a good rep before Coach K got there in 1980, losing to Jack Givens and Kentucky in 1978.

Starting with his first of five titles in 1991, Duke and Coach K haven’t looked back. Wright took Villanova to the Final Four in 2009 (winning in the same building they’ll be in this weekend) and won it all on the greatest last-second shot in Final Four history. This month, Wright became the all-time winningest coach in Villanova history at the age of 56. The potential for him to match Krzyzewski someday is there if he stays at the school and isn’t lured away by the NBA.

Duke and Villanova have used all types of players, including the elite types known as one-and-dones. Kyrie Irving was one of Duke’s most famous, leaving in 2011 after suffering through an injury-shortened freshman year and losing to Arizona in the Sweet 16. Villanova had – most notably – Tim Thomas in 1997, under Steve Lappas. The closest thing Wright has had is Kyle Lowry, who left after two years in 2006. Both programs have adapted over the years but Villanova has done it without 1-and-done help.

“It’s evolved, and we get asked about this so much. I would love to have one of those one-and-done guys,” Wright said. “Some of them, I can’t name them because of recruiting rules, but there’s local guys we don’t get.”

Like Krzyzewski, Wright has gone about building a winning culture in 15 years on Philly’s Main Line that has been about blending basketball within the strict academic rigors of an elite academic institution.

“There’s certain guys that just don’t fit our culture,” Wright continued. “So it’s kind of — and it’s the beauty of college athletics. There’s a lot of different ways to do it. You can go to an Ivy League school and still make the NBA. You can go for one year and make the NBA and come back and get your degree.”

Culture has been a buzzword with these Wildcats this season. In Jalen Brunson, Mikal Bridges and Phil Booth, you have three juniors who have stayed in school, choosing to enrich their college experience and their character for future NBA careers. Bridges is a projected lottery pick, Brunson is nails tough and will be a starting NBA point guard at some point. Booth could be a defensive specialist.

“I think guys should be able inform have their own decision,” Brunson said of forcing high school players to play college. “If they feel like they’re ready to go to the NBA straight out of high school, let them make that decision. But I just think with the Big East doing that — this is my first time really hearing about that. With the Big East doing that, they’re just trying to implement ways to make college basketball better. Guys who want to be in college, make sure they stay in college, and guys that want to go to the NBA, just let them go straight out of high school.

“I feel like the same way,” Bridges added. “If they feel like they’re ready coming out of high school, then it’s a blessing on them to go to the NBA. But I see what the Big East is doing too, trying to make it even more competitive, which is probably would be if people who are particularly like a top five pick who stay an extra year, that would be more competitive. Yeah, same thing Jalen was saying.”

Wright has made the most of creating the environment that once talented players like Brunson and Bridges arrive, they want to stay.

This week, Big East Commissioner Val Ackerman took a bold measure, drafting a letter that proposed a “two-or-none” rule be applied, giving those players with realistic NBA aspirations the chance to play in the NBA.

Ackerman has recommended replacing one-and-done with a two-or-none policy (similar to MLB) in college basketball, along with the suggestion of NCAA regulation of agents and the creation of an elite player unit to focus on “players with realistic aspirations” of playing in the NBA.

“Val talked to all the coaches about that stuff and the athletic directors, and in general, we’re all in agreement with that paper she produced,” Wright said. “We are all in agreement. There’s little different areas. In the postseason, I would go into it more in depth. But I just think there should be a relationship with the NCAA and the NBA because the whole issue is an NBA issue. These players should be allowed to come out of high school and go right to the NBA if they’re good enough, and if they’re good enough to be potential NBA players, they shouldn’t have to go to college if they don’t want to. They should be given an opportunity in the G League to earn the amount of money that they’re worth and not have to go to college.

“One of the problems — not all the problems — in college is some players are being forced to go, and coaches are being forced to coach guys that don’t want to be in college, and that’s on the NBA. It’s not on the NCAA. The NBA should provide an opportunity for them to go to the G League and be developed in the G League if they don’t want to be educated and go to college. So we’re putting kids in a tough spot. We’re putting college coaches in a tough spot.

“Now, college coaches and the NCAA have to take our responsibility for a lot of other things, but that’s one of the areas I think is important.”

Wright knows full well that the lifeblood of continued basketball dominance at Villanova, like Duke, is talent. As great an institution as Villanova is, their ability to stay on top like Duke has in the Coach K era is getting an abundance of elite players to commit, for however long.

There was Michael Kidd-Gilchrist, whom Kentucky’s John Calipari beat Wright for in 2012.

“Michael Kidd-Gilchrist was one that was coming down to us or Kentucky,” Wright said of the Elizabeth, New Jersey product. “I really thought he would have been great at Villanova. It’s more the individual person. He’s a good kid, good student. He loved Villanova. John just did a better job at the end.”

Last Fall, it happened again. And this time it was Duke. Norristown, Penn. is literally in Villanova’s backyard. But that didn’t keep Coach K from swooping in and plucking 6-foot-7 forward Cameron Reddish (think Mikal Bridges) from Westtown School.

Wright will try to take his culture – and gifted program – back to the Final Four with two wins this weekend, where he could meet Coach K and Duke in San Antonio in the National semifinal with any luck.