‘You just feed off of that’: What Patrice Bergeron’s Four-Goal Night Means for Bruins Offense 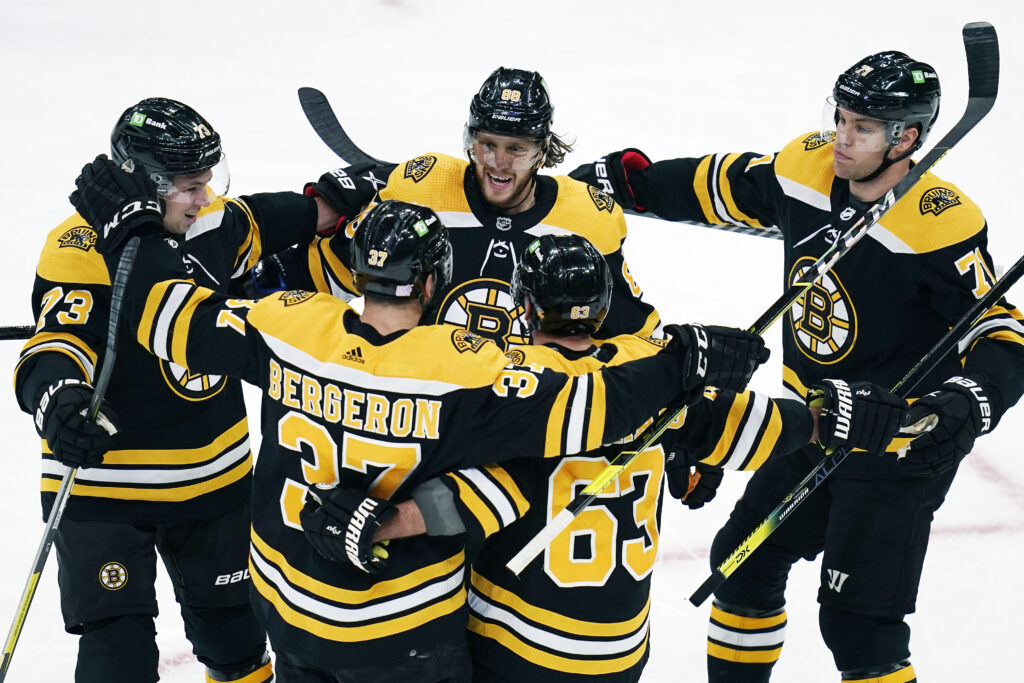 The Bruins entered Thursday night ranking bottom 10 in the league in power play percentage (15.8). That’s not something they’ve been accustomed to in recent seasons.

Patrice Bergeron entered Thursday night with zero goals in his previous seven games. That’s also not something he, nor the Bruins, have been accustomed to in recent seasons.

That all changed in Thursday night’s 5-1 win over the Red Wings when Bergeron cashed in on three of the first four Boston power plays. This was all before the second period horn sounded.

He added a fourth goal late in the third.

“He’s too good a player to keep him down for long,” Bruins head coach Bruce Cassidy said of Bergeron after the win.

Bergeron’s first power play tally started with Charlie McAvoy at the top of the zone. And then, like opposing teams have become accustomed to in recent years, the puck went from Brad Marchand’s stick to Bergeron’s in an instant. Before Red Wings goalie Thomas Greiss knew it, it was in the back of the net.

Mark this down as Patrice Bergeron’s first of the season: pic.twitter.com/rdLQXPtE9H

On the second goal, the four Red Wings penalty-killers were caught watching the puck below the goal line. Marchand took advantage of this, firing a pass into a soft spot in the offensive zone which unfortunately for Detroit, was the front of its net.

Bergeron noticed this, sneaked behind the defenders and fired home his second of the game.

Brad Marchand gets this one to Patrice Bergeron without looking.

“It’s crazy what he’s been able to do,” Bergeron said of Marchand’s playmaking ability. “We feel like he’s been able to improve over the years. I’ve been fortunate enough to see him develop and grow over the years. Obviously his competitiveness is probably one of the best in the league and it’s what makes him so successful. He never quits on any play but also his vision, creativity. He’s able to make plays out of nothing.”

The hat trick came when McAvoy, Marchand and Bergeron created a 3-on-2 at the top of the offensive zone. All three seemed to wait for the perfect opportunity to get Detroit forward Vladislav Namestnikov away from Bergeron enough for the Bruins captain to fire home a one-timer.

“There were a lot of shots coming from me, so I was just trying to give it back quickly to [McAvoy] and just catch a couple guys cheating,” Bergeron said of the play.

The one common thread among all three power play goals: None came from anything new the Bruins man-advantage put forth. There was no new formation. The passing was similar, so too were the players.

The Bruins first power play unit simply did its job. As cliche as it may sound, for the first time all season, they executed what they’ve been trying to do to perfection. The Red Wings overcommitted to stopping a David Pastrnak one-timer and the Bruins adjusted.

“The way Detroit killed set up well for us,” Cassidy said. “We like to start in the slot, slot plays around the net. They take away the elbow shooter, so it was going to be a good night if we were able to execute and we did.”

Through the previous seven games, McAvoy looked to be the shakiest link in Boston’s first unit. His puck-handling and setup abilities weren’t where the Bruins needed them to be. Slotting in Matt Grzelcyk seemed like the better option.

But McAvoy excelled on the power play Thursday night, assisting on two of Bergeron’s three power play goals. His transitions out of his own zone, through the neutral zone and into the offensive zone were smooth.

The rest of the top power play unit — made up of Bergeron, Marchand, McAvoy, Taylor Hall and David Pastrnak — also did its job. Hall and Marchand fished for pucks. Pastrnak drew the most attention, although the Bruins would love to see him convert a bit more. Bergeron put himself in spots to cash in.

Are the Red Wings a penalty-killing juggernaut? Far from it. They entered Thursday ranked 24th in the NHL with a penalty-kill percentage of 74.3 percent. Not great.

But it’s nights like these against opponents like Detroit that are perfect chances for the Bruins power play to come alive.

“Our confidence wasn’t maybe necessarily there,” Marchand said of the prior seven games. “You have a game like tonight, you just feed off of that.”

What is Jake DeBrusk’s Trade Value for the Bruins?