With a perfect blend of complementary football, the Bengals can enjoy their mini-bye. 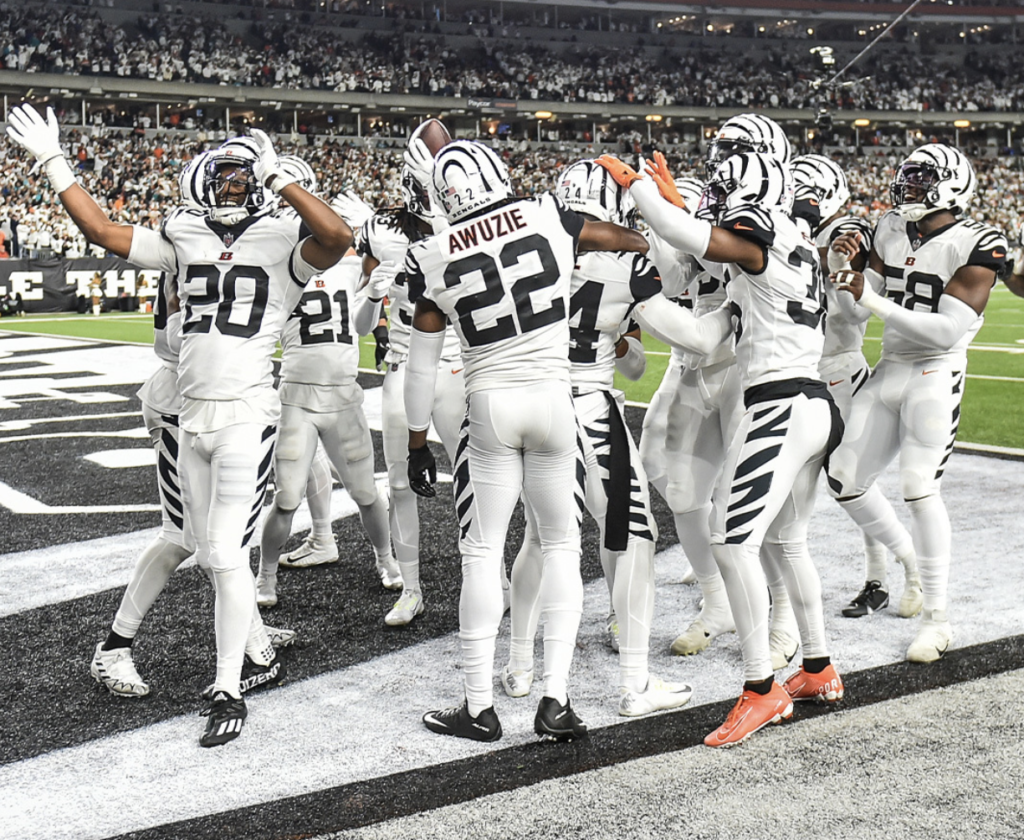 CINCINNATI — There were no great style points awarded Thursday night to the Bengals for their 27-15 win over the Miami Dolphins.

But there almost never are when you’re talking about the meat grinder that is NFL football on three days rest.

Playing and defeating one of two remaining unbeaten teams after three weeks is a feather in the cap of this team that was desperately looking for momentum after an 0-2 start.

“Expected, just because we’ve got a great team. I love this team,” Zac Taylor told me. “I love everything about them. They didn’t hesitate for one second after those first two weeks when all the noise was getting out about expectations. They didn’t let that affect them for one second.”

Taylor went through a different kind of meat grinder in his first two seasons. Six wins in 32 games. Then, in Week 10 of his third season, he loses his franchise quarterback to a torn ACL.

Taylor has been through the grind with the core of this unit. Last year’s run to Super Bowl LVI showed him that this team has what it takes to overcome adversity.

This team was 7-6 and teetering in Denver. They then win three straight to capture the AFC North. They were facing Tennessee on the road in a 16-16 game and the Titans with the ball and a chance to win. Logan Wilson steps up and Evan McPherson kicks the first of two straight playoff game-winners.

In Kansas City, they pull off one of the greatest road comebacks in NFL playoff history to advance to their third Super Bowl.

So at 1-2, Taylor knew well enough not to panic when the Dolphins Thursday night pulled ahead 15-14 with 2:40 left in the third quarter. How would the Bengals respond? They drove the field 74 yards, only to have Joe Mixon stuffed on third down and settle for a 29-yard go ahead field goal.

The Dolphins, playing without their emotional leader in Tua Tagovailoa who was hospitalized briefly in Cincinnati for a concussion protocol exam, responded. They had third-and-1 at their 34 and Logan Wilson stuffed Chase Edmonds for a one-yard loss. Punt. The Bengals answered with a McPherson 57-yard field goal, putting the Bengals up, 20-15.

Then the Dolphins put together a drive in which they marched to the Cincinnati 26 before Teddy Bridgewater overshot Mike Gesicki and Vonn Bell was there at the Bengals 9 with 3:17 left in the game. Bell returned to the Miami 45. Five plays later, Joe Burrow finds Hayden Hurst from two yards for the touchdown. Game over.

“They just came out and answered the bell, and responded for two consecutive weeks,” Taylor said. “Just really proud of them on this stage, against that team. That’s a really good football team — they’re going to win a lot of games. I thought they handled every moment in this game exactly how they needed to, especially in the second half. Capitalizing on turnovers, touchdowns, special teams stepping up big — that was just a great way to win a Thursday night game.”

Zac Taylor says the offensive line did a great job tonight and defense and special teams stepped up huge. pic.twitter.com/X8hN2wL6OZ

The Bengals, in the period of four days, have done what talented teams with the weight of expectations do after a slow start. They make corrections, take a collective deep breath and execute better.

Voila. They’re back to 2-2 and back in the mix in the AFC North with Baltimore on tap in another prime time game Oct. 9 in Baltimore.

The Bengals turned to their leaders again Thursday night, with one of their captains and best players out indefinitely with a left knee injury.

Logan Wilson, Vonn Bell, Jessie Bates, Mike Hilton and Chido Awuzie all made key plays to help stem the Miami tide. On special teams, Trent Taylor returned a 67-yard Thomas Moorstead punt 24 yards to negate what could’ve been a key field position moment in the game. And rookie Jeff Gunter made the special teams play of the night, blocking a Jason Sanders 52-yard field goal to set the Bengals up at midfield.

After the Bengals opened the game with a 75-yard march down the field, the offense began to stall. Then, on third-and-11 from the Bengals 41, Burrow saw Tee Higgins being covered by Xavien Howard in man coverage. He hit the jackpot on a 59-yard touchdown connection. The quick-strike offense was back. Later, Burrow would hit Higgins for 20 yards and Ja’Marr Chase for 36 and Tyler Boyd for 43.

“It was great. Two of them were go routes, and TB had a route that he scored on against Arizona a couple of years ago that we’ve been saving. We’ve tried to get to it before, it’s just tough to get to sometimes,” Taylor said. “Those two guys stepped up when we needed them. Tee on the third down — that was huge. We were staring down the barrel of another three-and-out at that point, and so they were doubling Ja’Marr, they were doubling TB, and so Tee had the one-on-one against a great corner. He got him, he scored a touchdown, so that gave us a lot of momentum at that moment in the second quarter.

“Ja’Marr’s was when we needed it — we just got the turnover, I believe, and we needed that big play to keep going. They were challenging us at that point, playing press-man, and that’s where Ja’Marr steps up big on the go route. Then T.B., same thing, we need some momentum so he ran that little corner-post and made a big play. You can talk about those three guys, they deserve credit, but the offensive line did a heck of a job. Joe had time to make the throws that he needed to make versus a good defensive line — a good pressure team.”

Burrow had the chance Thursday to make big throws under pressure because the offense line is starting to gel. Again, it’s not perfect but it’s getting better and better.

Championship teams are built on the fundamental principle of complementary football. That’s what the Bengals showed Thursday night.

“On offense we’re finding our stride,” Burrow said. “The defense has been great all year. We’re starting to click on all cylinders. There was a spell halfway through the game we didn’t put points on the board, but I thought we responded well. We scored points when we needed to, and the defense did what it usually does.”

Thursday was a glimpse of something they’re going to need to show all season.

“I’ve got a lot of faith in our defense,” Taylor said. “It’s like comparing your children, so I’m not comparing them to the other (units), but we know that when need them to step up, they’re going to do it. Whether that’s putting pressure on the quarterback, being tight in coverage, creating those turnovers they did — that’s a really explosive team. They put you in a lot of different tough spots.

“I thought we did a great job with bending, not breaking. Even the play that we gave up down the field, (Chidobe Awuzie) had excellent coverage. He’s right there, and they just made a play. That’s going to happen when they have (great) players like that. I’m just really proud of the way that the guys kept responding and were able to help us pull it out.”

Added Burrow, “That was one of the first things we said in the locker room. We had two games in 10 days to get that ugly taste out of our mouths. Then we have a long weekend to enjoy, get our bodies right, eat good food, watch some football, enjoy the weekend and come at it.”