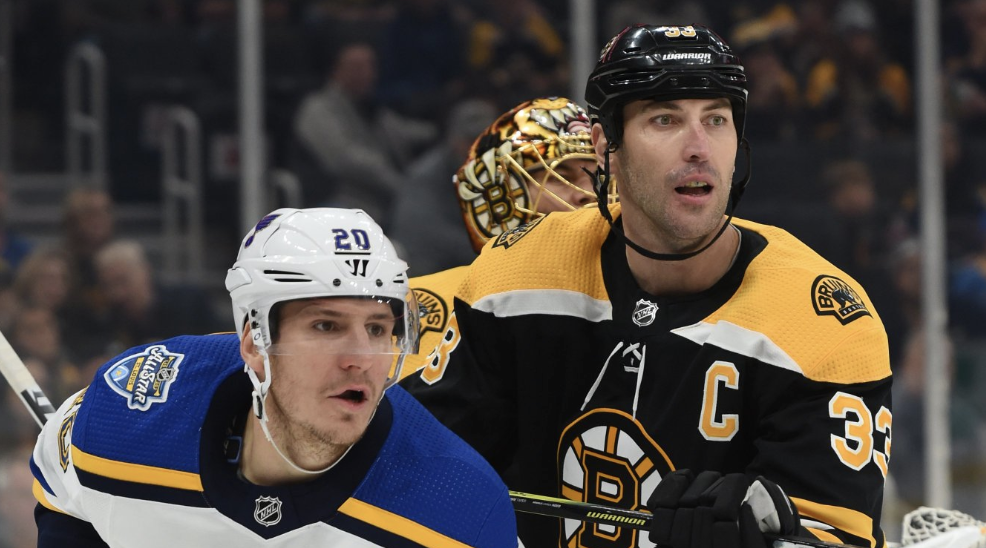 BOSTON — When Zdeno Chara drilled Oskar Sundqvist 38 seconds into Saturday night’s “Game 8” of the 2019 Stanley Cup Final, his message on behalf of his Bruins teammates was unmistakable.

We remember Sundqvist laying out Matt Grzelcyk in Game 2 of the Cup Finals that resulted in Grzelcyk missing the next four games before returning to play 18 minutes of Game 7, the 4-1 Blues win that gave St. Louis its first-ever Stanley Cup.

We also remember the Blues systemically taking away the Bruins’ strengths in beating Boston on Garden ice not just in Game 7 but Games 2 and 5.

Don’t for a second believe Brad Marchand when he said before Saturday’s game that he didn’t even know it was the Blues they were playing on Saturday night. They knew. And they remember.

They remember everything so painful about what should have been a coronation of the best and most-skilled team left in the NHL playoffs last spring. The tone of that Final with the Blues most certainly changed when Sundqvist drilled Grzelcyk’s head into the corner glass on a hit from behind. The Bruins lost one of their very best puck-carrying defensemen and fastest skaters.

“Obviously, I’m the leader of the team and you want to set the tone early,” Chara acknowledged. “I’m sure right after, everybody was aware that it was going to be a good game. It was going to be along the boards and a lot of plays and it’s going to be all about winning battles and races and blocking shots. We did that well tonight.”

“Early on I thought Zee [Zdeno Chara] had a big hit early on, clean hit on a breakout,” Bruce Cassidy said. “You know, Cliffy had a couple of counter hits, and off we go. Felt like we were back in the playoffs. Good, solid, clean hits and I think as the game went on, it became your typical hockey game. We got the lead, started well, had some good looks early, kept them out of our end, didn’t give up much, and that’s important with St. Louis.

The Bruins delivered five hits in the first four minutes. The hard hits the Bruins delivered at the start of this grudge match from last spring were much more about sending a message to themselves as it was to the team that skated with Lord Stanley on Garden ice on June 12.

The Bruins were also flying around the ice and getting pucks on Jordan Binnington, the Blues goalie that single-handedly saved the Blues early in Game 7 back on June 12. Patrice Bergeron had the first shot on goal in the opening nine seconds. Just get it on Binnington, again sending the message: We remember.

Yes, Saturday night was simply a regular season game matching the two Stanley Cup final participants from four and a half months earlier. But to the Bruins, it has the potential to be so much more.

It’s a reminder of who the Bruins really need to be. They need to be a better 5-on-5 team that does the dirty work and not simply rely on the power play. They need to be better on all four lines. They need to stand up for their teammates, which they already do as well as any team in the NHL.

Zdeno Chara is getting up there like Tom Brady. Everyone knows the Bruins captain is 42. And many observers are assuming this will be it for Chara. On Saturday, he did exactly what a 42-year-old leader of a team with championship aspirations should do. He delivered a message to his own team by his actions.

“I think it does when it’s Zee,” Cassidy told me. “He’s certainly capable of it every night, but they always protect themselves every night. Don’t want to go chasing them, but against a physical opponent we know that they’re going to come out banging, and they did, so it was good for us to initiate, not retaliate, so I think the guys appreciate that.”

Tuukka Rask came up big again in the second period, turning away several shots as the Blues applied pressure deep in the Boston end.

They gave up their bodies, no one more than Chris Wagner, who blocked a cannon from Alex Pietrangelo from the high slot on a Blues power play early in the third period. David Pastrnak had his league-leading 11th goal when his slapper beat a leaky Binnington from the left circle.

But what separated this from some other early-season games this year was the second Boston goal. Anders Bjork went flying down the right wing. He spotted Grzelcyk filling the slot, fed him, and then got the puck back from the high-flying defenseman, ripping a one-timer past Binnington in the second period for a 2-0 lead. The Bruins got a goal from a third-line forward and got one of their best puck-carrying D-men involved in the rush. And the Bruins proved they can score 5-on-5.

Grzelcyk was likely not at full strength when he took the ice in Game 7 after the hit in Game 2. The Bruins wouldn’t want to make excuses but when you’re down one of your best young players in a game with very little separating the two teams, it’s hard not to think what might’ve been had they had Grzelcyk healthy for the entire series.

But that really was what Saturday night was about. The Bruins reminding themselves more than the Blues that if they play their game, even strength, power play and penalty kill, with Tuukka backing them up, this team has every reason to think they can finish the job this spring.