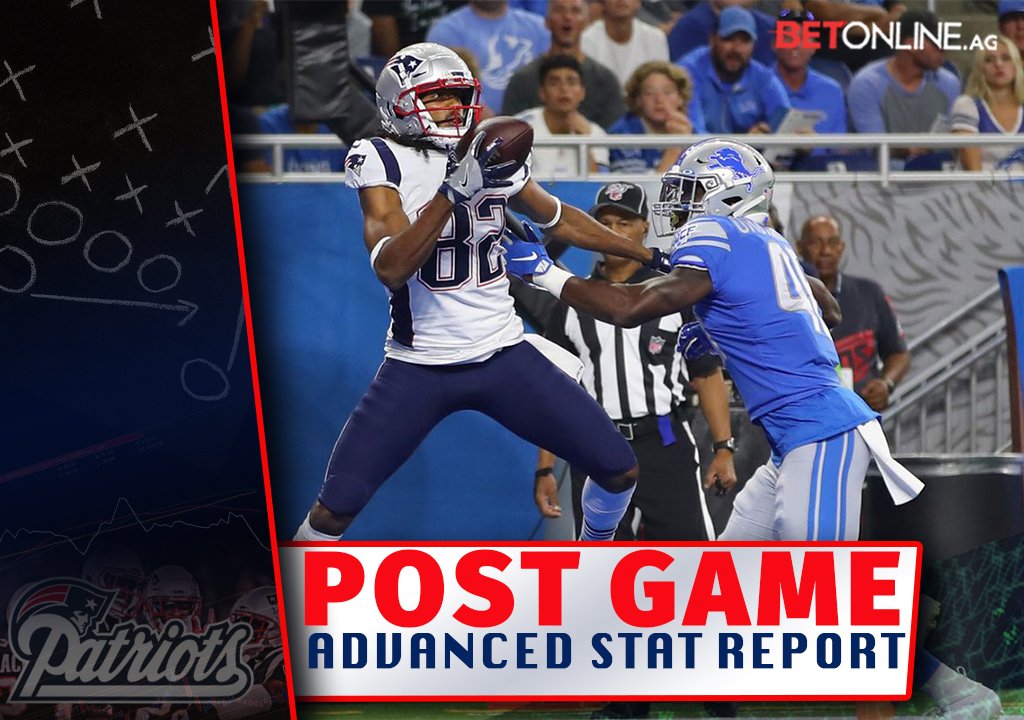 Below are a variety of advanced stats from the Patriots’ 31-3 win over the Lions in Thursday night’s preseason opener.

With Tom Brady cheerleading on the sideline, Brian Hoyer and rookie Jarrett Stidham carved up the Detroit secondary on Thursday night.

The Pats quarterbacks completed nine of their 15 attempts that traveled ten or more yards in the air and Stidham was accurate on three others that were dropped by Patriots receivers.

As far as Hoyer goes, he made two high-level downfield throws in what was a workmanlike performance from the veteran.

I broke down his touchdown pass to Maurice Harris in my ten things after the game so let’s discuss a seam throw to tight end Matt LaCosse here.

On the play, the Lions were in a cover-2 zone with two split safeties taking half the field. Hoyer knew that if the dropping linebackers bit on play-action, he’d have LaCosse open with the middle of the field open. The linebacker assigned to run the deep hole in cover-2 with LaCosse bites on the fake, and Hoyer puts the ball in a perfect spot.

In the time to throw department, Hoyer got the ball out extremely quickly at 2.19 seconds per attempt, which is a good sign that he’s keeping the offense on time.

Brady’s time to throw is often in the 2.2-2.5 second range, and the Pats offense relies on quick decisions.

Stidham, on the other hand, was more deliberate delivering the ball in 3.02 seconds per attempt.

On Stidham, I’ll do an in-depth film review on the rookie that will cover over ten throws and all the data you need to know from his preseason debut.

The Patriots rested the veterans along their offensive line on Thursday night, which gave us an extended look at some of the reserves and left tackle experiment, Dan Skipper. On the stat sheet, Stidham and Hoyer were only under pressure on 24 percent of their drop-backs, and Hoyer, in part due to his quick trigger, wasn’t pressured on a single drop-back. Although the results were good for Skipper (one pressure allowed), the process needs a lot of work.

Here’s an example on a Hoyer completion to Phillip Dorsett. First, watch Skipper’s feet. He’s crossing over and clicking his heels rather than sliding, which is a big no-no because it makes you clumsy, unable to change directions and powerless. Then, watch his upper body. The 6-10 tackle struggles to bend at his knees, so he bends at the waist to try to create leverage. Finally, watch his arms. He has zero arm extension, and his hands are falling off the defender. Skipper gets no power from his upper body, nor is he properly leveraging blocks. But he does enough to stay in between his man and Hoyer, so the stats say he did his job. Better pass rushers will eat him alive if his technique doesn’t improve.

Patriots quarterbacks were six-of-seven for 67 yards and three touchdowns targeting receivers running out of the slot. Although Meyers and Harris caught the touchdowns, Braxton Berrios’s 45 yards from inside led the way, and his fourth down conversion on an Edelman and Amendola special was excellent.

On the play, Berrios ran a whip route (aka pivot or jerk route). Against man coverage, Berrios reads the leverage of the cornerback lined up across from him. If the corner has inside leverage, like does here, Berrios will fake an inside release and break outside. Berrios sets up the Lions defensive back and makes a nasty cut at the top of the route to create separation.

Along with nine sacks, the Patriots pressured Lions quarterbacks Tom Savage and David Fales on 52 percent of their drop-backs.

The Lions’ reserve offensive line was horrendous as the Patriots didn’t do much scheming; it was an ass-whooping mano a mano.

On Winovich’s solo sack, he shot out his stance with a great get off to blow by Crosby at the snap. Then, notice how Winovich lowers his pads and gets his hips pointed towards the quarterback as he turns the corner. By doing those things, Winovich gives Crosby minimal surface area to get his hands on the Pats rookie to engage in a block. A great first step and an excellent turn around the corner leads to an easy sack for Winovich.

Along with Winovich, linebacker Jamie Collins was disruptive in his first game action as a Patriot since Bill Belichick traded him to the Cleveland Browns in 2015. Collins played the first 11 plays on defense for New England before taking the rest of the night off.

Lastly, it’s good to see the development of 2017 third-round pick Derek Rivers. Rivers has great speed around the edge and converts that speed into power. He has shown flashes of an expanded repertoire of pass-rush moves in practice as well.

The Patriots secondary didn’t have very many opportunities, but there were a few takeaways from the drop-backs that didn’t result in a sack.

Jackson’s ability to play the deep ball was on full display once again when he broke up a David Fales pass intended for wide receiver Andy Jones. Jackson had great technique at the line of scrimmage holding his inside leverage by jamming Jones with his inside hand forcing him into the sideline. Jackson remains in phase with Jones down the field, which allows him to play the ball in the air. He turns to locate the ball and forces the incompletion.

On the other end of the spectrum, 2018 second-round pick Duke Dawson was one of the lone negatives on a good night for the Patriots.

The first completion was a negative play for both Dawson and safety Duron Harmon, but Dawson got beat again by Lions wideout Tom Kennedy late in the fourth quarter.

The Florida product has trouble transitioning his hips to keep up with route breaks from quicker receivers out of the slot and struggles to get receivers on the ground.

Belichick doesn’t give up on second-round picks easily, but Dawson needs to show us something over the next couple of weeks to make the roster.