Thursday night's AFC West matchup is an important piece to the playoff puzzle. 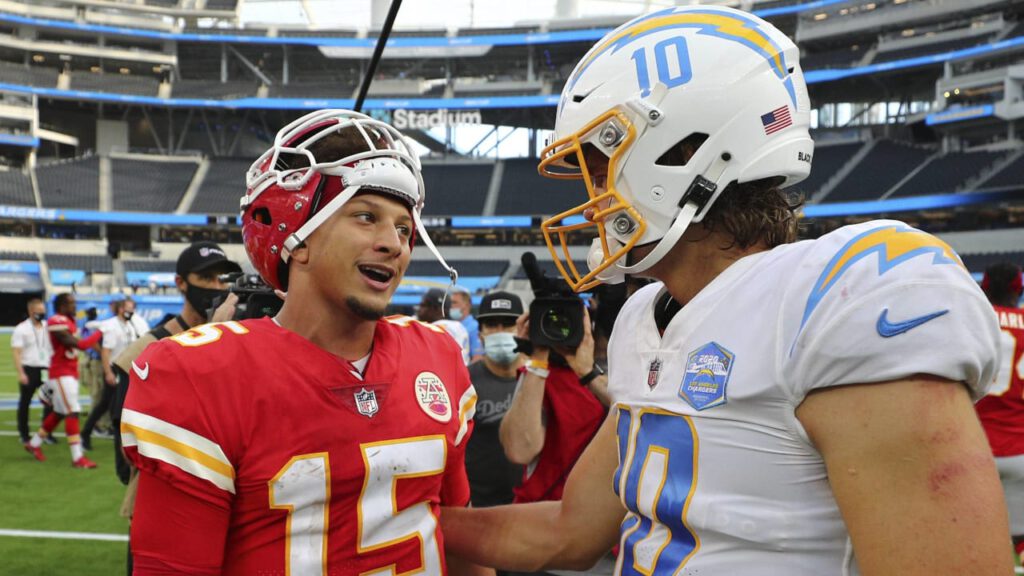 After both the Chargers and Chiefs came away with dominant wins on Sunday, the two AFC West foes are set to battle it out this Thursday night for the second time this season.

Thursday’s game will kick off at 8:20pm from LA’s SoFi Stadium, with Joe Buck and Troy Aikman on the call for FOX.

Here are the odds for the matchup, courtesy of BetOnline.ag:

The first time these two teams played back in September, LA came away with a commanding win at Arrowhead. Chargers quarterback Justin Herbert threw for 281 yards and four touchdowns, and at the time was cementing himself as a top NFL MVP candidate.

On the other side of the ball, the Chiefs had fallen to 1-2 with Pat Mahomes throwing his fourth interception in three games. Kansas City was struggling to get anything going offensively, and ended up losing four out of their first six games.

Now? The Chiefs are riding a six-game win streak – and have allowed just 11 points per game over that stretch. The offense is playing sound football, and KC once again has themselves lined up as a viable option in the AFC.

Meanwhile, the Chargers have come back to earth a little bit after a lightning fast start to the season. They currently sit at 8-5 and are the fifth seed in the AFC playoffs. They are – however, 2-0 in their last two while averaging 39 points per game over that stretch. Herbert has the offense rolling and with just a one game lead over the Colts in the wild card race, will need every win they can get from here on out. This weekend is absolutely critical for playoff seeding with several different AFC teams facing off.

COVID-19 has spread around the NFL like wildfire this week, and it’s no different for these two teams. The Chargers placed star rookie tackle Rashawn Slater on the reserve/COVID-19 list on Monday. LA was missing star wide receiver Keenan Allen on Sunday against the Giants due to the virus, and had several of their room go through the protocol before ultimately being activated for the game.

After a record 37 positive COVID tests Monday, results still are being finalized but more than 25 additional positives are expected today, per source.

One of these pass catchers, Mike Williams, missed Monday’s practice with an ankle injury. He, along with other offensive weapons Austin Ekeler, Jared Cook, and Donald Parham Jr., is listed as questionable for Thursday night against Kansas City.

As for the defensive side of the ball – tackles Linval Joseph and Justin Jones, safeties Derwin James, Trey Marshall, and Alohi Gilman, and cornerback Asante Samuel Jr. are questionable for LA.

Kansas City could be dealing with a bout of COVID as well. Wide receiver Josh Gordon, who caught his first touchdown as a Chief on Sunday, tested positive following their route of the Raiders. Defensive tackle Chris Jones was placed on the reserve/COVID list on Tuesday.

As for physical injuries. L’Jarius Sneed, Nick Bolton, Lucas Niang, Derrick Nnadi, and Rashad Fenton are all listed as questionable for Thursday.

There’s nothing better than having meaningful football to watch on Thursday nights. With these two star quarterbacks commanding high powered offenses that are both hitting their stride, this game is sure to be a good one.

Coincidentally, my prediction would leave the Patriots as the one seed in the AFC – for now… Chargers win and cover in a high scoring affair at SoFi Stadium.