Patriots Looking to Catch Lightning in a Bottle vs. MVP Hopeful Herbert | BetOnline.ag

LA Chargers quarterback Justin Herbert has the eighth highest odds to win MVP, according to BetOnline.ag. 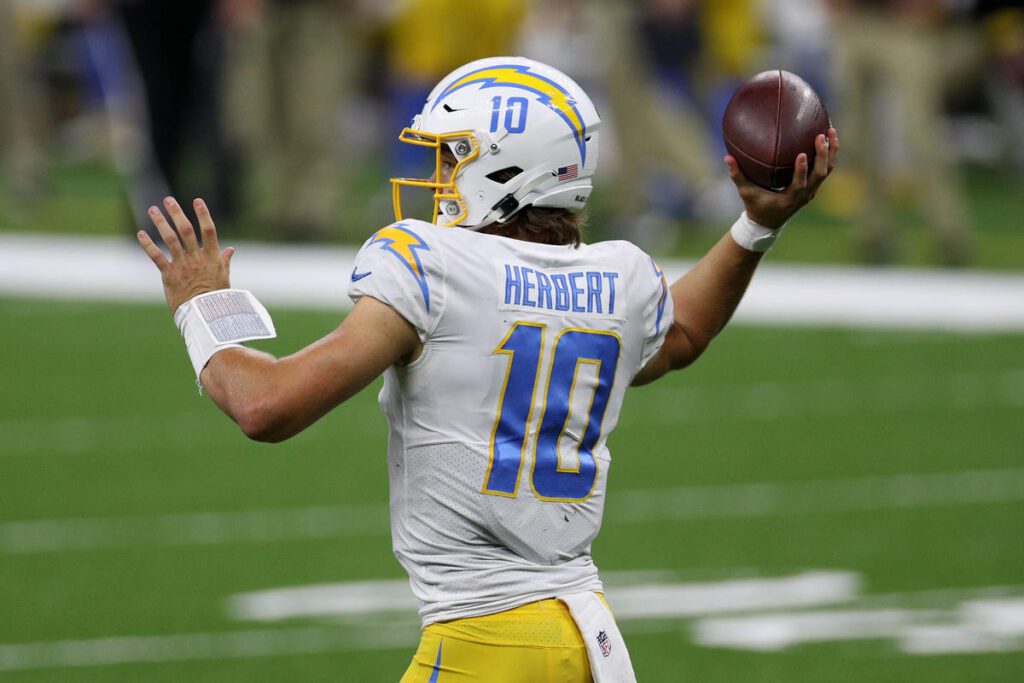 After a 54-13 shellacking of the New York Jets on Sunday, it’s time for Belichick and the Patriots to take the beer goggles off and focus on the next task at hand.

They head to the West Coast this coming Sunday where they’ll take on the LA Chargers from SoFi Stadium in Inglewood, California. Kickoff will be at 4:05pm on CBS.

Los Angeles is led by second-year quarterback and 2020 Rookie of the Year Justin Herbert. The 6-foot-6 23-year old continues to show off his athleticism and rocket arm week after week for the Chargers.

Herbert has completed 65% of his passes and thrown for 1,771 yards over the teams first six games. He’s found the endzone 14 times through the air and once on the ground, and has thrown just three interceptions.

According to CLNS Media’s exclusive wagering partner BetOnline.ag, Herbert has the eighth highest odds to take home the NFL’s Most Valuable Player Award this season. Here’s a look at the top ten:

The Patriots certainly have their work cut out for them on Sunday with the way Herbert’s playing. Not only is he lighting up the box score like he did as a rookie, but he’s actually winning games now. The Chargers currently sit at 4-2 and are in second place in the AFC West. CLNS Media’s Evan Lazar is reporting that Patriots safety Devin McCourty’s status for Sunday is uncertain due to an ab injury. This could hinder their chances at containing Herbert.

#Patriots safety Devin McCourty (abdomen) avoided a serious injury in Sunday's win over the Jets. However, his status for this week is uncertain. A source described McCourty as "week-to-week."

This LA team will be completely different – both organizationally and confidently – than the one New England saw less than a year ago. The Patriots went out to Los Angeles in week 13 of last season and stomped the Chargers out 45-0. New England’s defense held Herbert to just 209 yards in the air and forced him into throwing two interceptions.

Since then, the Patriots have won just four games – three against the Jets, and one against the Texans. While that says just about everything you need to know about this team right now, Sunday’s win against New York has the potential to be a major turning point in New England’s season.

CLNS Media’s John Zannis and Boston Sports Journal’s Greg Bedard talked about the likelihood of this jump start on the Boston Sports Beat podcast this week:

Currently sitting at 3-4, they’re just one game back out of a Wild Card spot. Their next stretch of games coming up is incredibly important for their season. They take on the Chargers, Browns, Titans, and Bills over the next six weeks. It all starts this Sunday in LA for the playoff hopeful Patriots.

Keep it here on CLNS Media and at our YouTube channel Patriots Press Pass leading up to Sunday’s game against the Chargers.