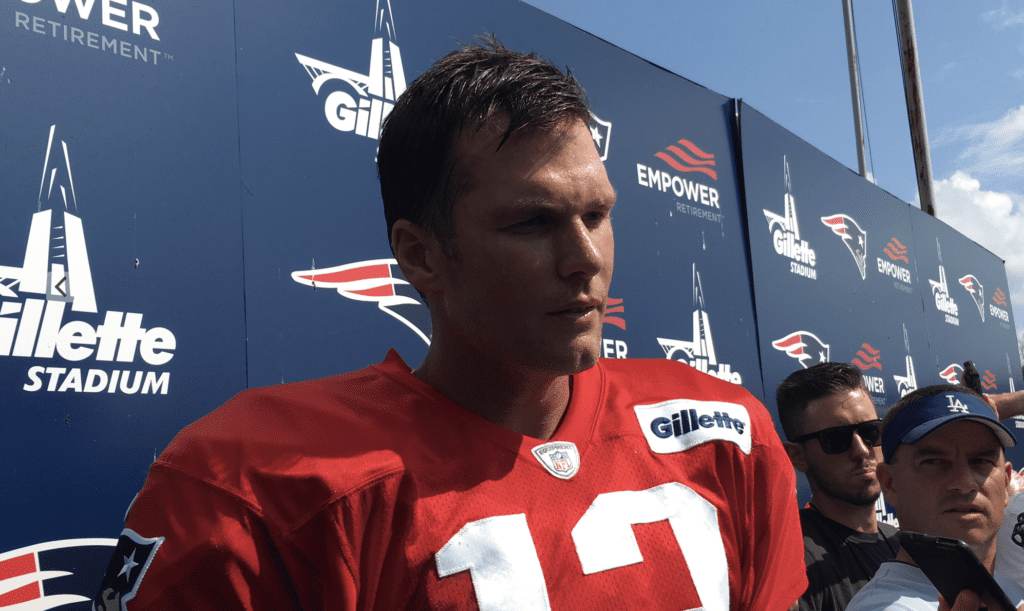 FOXBORO — This is what Tom Brady has been waiting for all offseason. And no, we’re not talking about finally shaking the hands of Super Bowl MVP Nick Foles.

Through the self-imposed hiatus in the spring and the well-disguised, thinly-veiled back-and-forth with upper-level football ops, the most prolific and accomplished quarterback in NFL history takes the field Thursday night in a game for the first time since his Hail Mary fell just beyond the grasp of Danny Amendola and Rob Gronkowski in Super Bowl LII. If he takes a snap, it will be his first at Gillette Stadium in a preseason game since 2015.

And, appropriately, his return comes against the same team that kept him from a sixth Super Bowl ring.

Obviously, this is just preseason but these are more significant first preseason snaps for Brady for several reasons. He hasn’t taken as many snaps this offseason so he’s been playing a little bit of catch up this camp. Certainly, he doesn’t figure to need much with his experience. But whether it’s an unproven first-year rookie or a veteran entering his 19th NFL season, nothing prepares quite like snaps at live game-action speed.

Just how important does Brady view the first preseason snaps?

“They’re important. You know, it’s good work,” Brady told me. “It’s always – whether it’s walk-through, practice, game, it all matters because I think if it was a waste of time, you know, we wouldn’t do it. I think there’s a lot of urgency and you know we’re not where we need to be, got a lot of work to do and these practices are a part of it, the opportunities that we get in the game. When everything’s full live, quarterbacks getting hit, that provides a little different element. So it’s good to get out there and it’s good to be out here practicing and we got to try to see if we can put together a great performance on Thursday.”

For the first time in seven years, Brady won’t have the benefit of joint practices with another team to get in his extra reps during practice at a controlled tempo.

“Sometimes when you practice against another opponent, it actually gives you a pretty good idea of where you’re at because we’ve been going against each other for a while,” Brady said. “We just haven’t had that chance and we had a game to show it so you know, we got a big one against the Eagles and we know the challenge they present. So, trying to put a lot into it and see if we can obviously get a lot out of it. You know, it’s a big test. They’re a good team and we’re going to have to play well.”

Brady openly wondered about his passion and drive for the game in the fifth and final episode of “Tom vs. Time” and what it would take to muster it up again in 2018. But then you watch him after practice in the sweltering humidity working with second-year tight end Jacob Hollister and those doubts and concerns seem totally muted.

“I mean I love doing it. I love trying to get wherever, you know whatever you can get a little extra in,” Brady said. “We’ve had so many hot days, really hot days or really wet days and neither of those days are very good to do that extra stuff so got to take advantage of those days while we can and try to get a little extra work with the receivers and the tight ends and that’s what the goal is.”

Our Evan Lazar had a terrific look at Brady’s projected performance into his early 40s and how much longer we can expect the future hall of famer to keep producing at his unprecedented level.

Then, there’s the issue of his receiving corps. Danny Amendola and Brandin Cooks are playing for different teams. Julian Edelman won’t be playing the first four regular season games. And Jordan Matthews and Malcolm Mitchell didn’t even make it to the first preseason game before they were released with an injuries. Phillip Dorsett apparently escaped a serious leg injury on Tuesday during the final training camp practice.

Cordarrelle Patterson and Eric Decker are two receivers the Patriots and Brady would like answers on sooner than later in terms of their fitting in the offense. The common thinking here is that depth at the wide receiver position is really not critical when two of the most active targets in the passing game are likely to be Rob Gronkowski, Jacob Hollister and James White. But after Julian Edelman and Chris Hogan, then what? There’s Kenny Britt, Devin Lucien, Riley McCarron and Braxton Berrios.

“It’s just adapting to each other, I think that’s the key,” Brady said. “You know, certainly have expectations for players at certain positions and if it’s a receiver position, you try to show him as much film as you can and say, “Look this is how it’s got to be” and so forth. You know, it’s up to the different guys to figure out how quickly they can pick it up. But it’s a lot of back-and-forth, a lot of conversation and the way that you probably did it in the past, probably a little different but I mean it is pro football.”

Finally, there’s the health of the 41-year-old QB. The Globe’s Jim McBride reported after last Thursday’s game against the Redskins that Brady was limited in practice that week due to some back soreness. Clearly, when the quarterback is 41 and the word “back” comes up, you can’t help but think of Brady’s idol, Joe Montana, slowed by back issues late in his career.

Brady assured everyone Tuesday after practice that his back is not an issue.

Which naturally leads into the questions about whether his long-term goal of playing until he’s 45 still remain?

“I think you always have short-term goals and long-term goals and this year’s the one I’m focused on and obviously I want to play for a long time so I’ve said that for a while,” Brady said. “Feel like I’m a broken record. You know, it’s really this year is the focus and this team. This team needs a great quarterback and you know, hopefully I can go out and be that.”

Listening to that, one might think maybe Brady might be wavering. But then, with sweat dripping from his face after practice Tuesday, Brady’s talk about the fire of competition suddenly wipes out all doubt.

Oh, and there’s one more thing Brady will be working out Thursday – a new game helmet. Why, at 41, has he decided to go with the new piece of equipment?

“Our equipment manager Brenden [Murphy] was – been begging me to try it and I’m very resistant but it’s been pretty sweet so I kind of like it,” Brady said.

Is he keeping it?

“I don’t know. The face-mask isn’t quite right so I’m working on that but trying it out.”

Just one more thing for Brady to perfect before Sept. 9.