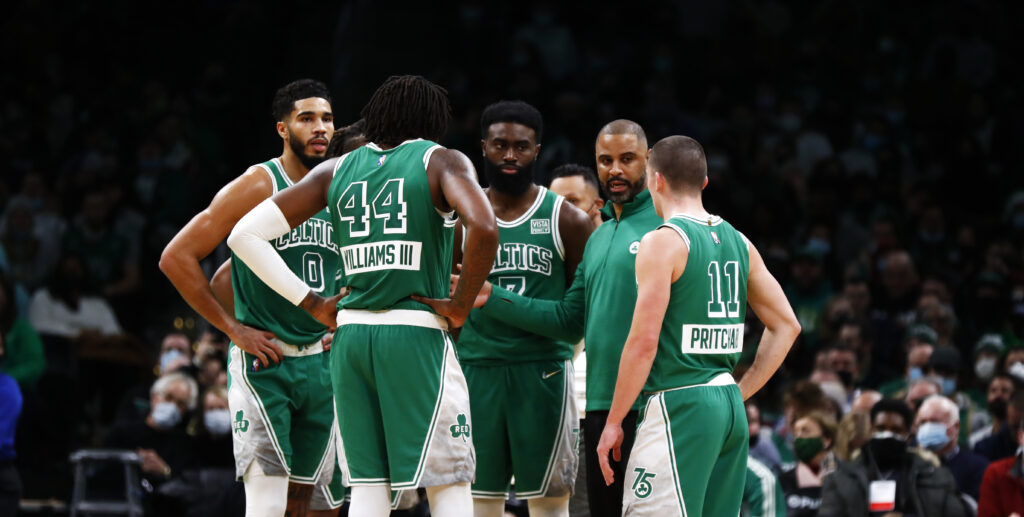 BOSTON, MASSACHUSETTS - DECEMBER 22: Head coach Ime Udoka (second right) talks with Payton Pritchard #11 (R), Jaylen Brown #7 (C), Robert Williams III #44, and Jayson Tatum #0 of the Boston Celtics during the second quarter of the game against the Cleveland Cavaliers at TD Garden on December 22, 2021 in Boston, Massachusetts. NOTE TO USER: User expressly acknowledges and agrees that, by downloading and or using this photograph, User is consenting to the terms and conditions of the Getty Images License Agreement. (Photo by Omar Rawlings/Getty Images)
Share
Facebook Twitter Email

The Celtics and their fans have reminded us repeatedly this season how many players they’ve lost to COVID protocol and injury. They’ve seen Jaylen Brown miss extended time due to his hamstring, and returning too early after. Jayson Tatum sat for four games with COVID and most of the roster also landed on that list.

Boston leads the league in days spent in protocol, again, while ranking top-10 in injuries and wins above replacement player lost to COVID. They’ve been on the high end of the absence ladder, even if missing players is typical this season.

“It is tough at times, because of the lack of continuity with lineups and rotations,” Ime Udoka said Sunday. “As soon as you get one back, it feels like another one goes out.”

There’s also a bigger story beyond injuries to this team’s letdown, the young players haven’t reliably allowed the team to win when starters go down. They also haven’t had time to develop and gel with Boston’s regulars. That could begin to change in 2022.

Cleveland, Denver, Miami and the Clippers have played better in the face of far worse losses. The Celtics, knock on wood, haven’t faced severe injuries like Kawhi Leonard and Jamal Murray’s. Now, with Jayson Tatum and Enes Freedom back at practice Tuesday, and Aaron Nesmith the final Celtic questionable to return from COVID, the team should reunite its full starting lineup for only the ninth game this season on Wednesday against the Spurs. 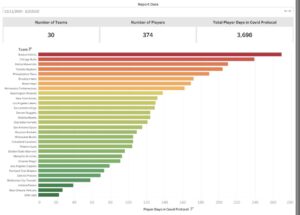 That leaves two questions in January: where health will land Boston before the deadline (TBD) and where a full array of veterans leave young players like Romeo Langford and Payton Pritchard?

When Langford, Pritchard and Grant Williams took on larger roles in 2021, they played some of their best basketball ever. Langford peaked on Friday, shooting 6-for-10 with 16 points, three rebounds and two steals against Phoenix. Pritchard shot 38.1% from deep, averaging 3.3 assists per game during his recent run of 20+ minutes per game. Grant played well enough to start a win over the Suns on Friday and join Boston’s crunch time unit on Sunday against Orlando over Al Horford. The other players need to contend for minutes with Brown, Tatum, Dennis Schröder and Josh Richardson.

“That’s the conundrum,” Udoka told CLNS Media on Sunday. “You’ve got guys who have played well. I’ve mentioned we were confident in those guys with the starters being out. Jaylen, Jayson, those guys are going to play the minutes they play. Dennis played extremely well while Jaylen was out, but Payton’s earned minutes as well … it’s been a number crunch to start the year. Josh has played really well and taken minutes from Aaron and Romeo, at times.

“It’s a good problem to have. Eventually when we get everybody back, our depth that’s been developed over this time with injuries and opportunity is something we’re obviously looking forward to seeing,” he continued. “Across the board, I think guys have played well enough to earn some minutes. So it’s a matter of finding the right rotations … then you can start to shave down the minutes of some on some of the guys that played heavy, especially Jayson to start the year. We know the amount of minutes he’s playing per game, and Al and guys that have been overloaded due to injuries and COVID.”

That played out Sunday, when Schröder’s returned after Richardson did last week. Pritchard played 12 minutes, better than some of the DNPs he took earlier in the season. Langford missed the game with a non-COVID illness, but finished with 23 minutes against the Suns, while Richardson logged 33 and Pritchard 13. Grant Williams started next to Horford and Robert Williams III for some added size and spacing. The Celtics can’t, and apparently won’t, turn back completely from this youth movement given their offensive needs.

Nesmith is a different story. He cleared NBA COVID protocols prior to Sunday’s game, then, according to Udoka, went back in and is questionable to play Wednesday. In his spot start against the Knicks, he shot 0-for-5 from three and finished December 40% from the field and 28% from three in 13.7 minutes per game. He struggled defensively, and this absence placed him even further behind the regulars and his fellow young players taking advantage of other absences. A trade closer to the deadline could swing this group in more of a developmental direction that benefits Nesmith. For now, he could struggle to find playing time.

Udoka can’t force him up the rotation while others perform better. Maine could be an option later, but the G-League season paused weeks ago. It’s a difficult balance, but for a team that appears more mediocre than contender for now, it’s one they may need to strike eventually. The NBA-worst Magic, who Boston faced Sunday, have a far easier choice, but a rise like Franz Wagner’s as a rookie underscores how opportunity can help any young player rise.

“I think it’s a lot of communication, understanding where guys are, necessarily, in their careers,” Magic head coach Jamahl Mosley, who leads a 7-31 rebuilding team, told CLNS. “Communicating with them, where we see them moving in their careers. With young guys, obviously having to get better, but also needing to play minutes. With the veterans, understanding what that looks like for some of the young guys having to play minutes. It’s a constant level of communication, but I also believe guys have to play to get better. So guys are gonna receive minutes here or there, and then our veteran guys continue to understand that certain guys are playing in different roles.”

Langford and Nesmith haven’t shown many spurts in their careers, but the former missed so much time since 2019-20 and the latter is still only 13 months removed from being drafted. Pritchard shined occasionally last season, only slumping as a sophomore due to lack of consistent opportunity. Williams and Williams III carved out roles for themselves and improved in certain areas, like three-point shooting and defensive positioning, but haven’t fully hit their strides as players yet either.

Each of the Celtics’ young players, Brown and Tatum included strictly as playmakers, are all in different stages. Nesmith could fade away over the next year. Langford could become an Avery Bradley-like defensive stopper with some cutting ability on offense who can improve his shot over time. Grant may be a role player, but a high-level one if he shoots and defends reliably. Pritchard could be a floor spacer and backup point guard for Boston. They could all fail. The team needs to find out.

Put each player in a position to succeed and do these things more often. Even Rob warrants a more consistent role in the offense, given the upside he’s shown. It’s no knock on Schröder, Richardson and Horford. All deserve a sizable role here, but less and less project to be contributors that lead this team into the future.

Tatum, the third-leading minutes player in the NBA before his COVID case, breaks will be a refreshing change change of pace from the marathon he’s been on since last season begin one year ago, right through the Summer Olympics.

Horford, who started the season strong defensively, shot 40.9% from the field and 29.2% from deep in December while averaging 32.5 MPG. His play could benefit from pointing that average downward, as Sunday showed when he sat late in the fourth quarter and to begin overtime, before stepping off the bench with the game-sealing three in the corner.

“Josh has played really well at times, and kind of taken away some of those minutes from Romeo and Aaron that they may have had, and there’s only so many to go around,” Udoka told CLNS at practice on Tuesday. “You’ve got Jayson and Jaylen, obviously are going to close games and be out there a majority of the time, and then depending on who’s playing well, whether it’s Josh, Grant, whoever. We don’t look at it as young versus veteran. It’s who’s playing the best. From my point of view so far, Josh has been really solid, Dennis has been really solid.”

Still, it’s hard to forego the more reliable players as a head coach. Brad Stevens played Evan Turner  and sometimes Gerald Green over a young Brown. Doc Rivers rarely gave the nod to his younger players. Their teams were in different positions than Boston is in now, unless this Celtics team goes on a real run with a weaker January schedule ahead and its rotation more intact.

“Hopefully, when we get (healthy), we can take a look at everybody, but shave down minutes and start to get guys fresh and play with more depth,” Udoka said Sunday, before addressing the rotation to CLNS again at Tuesday’s practice. “It’s something that we really stress in here, and I talked about that quite a bit with Payton and Romeo and guys in general, being ready for the opportunity. You’ve seen that for the most part this year. Overall, our confidence level is high in all those guys, they’ve stepped up when called upon … Dennis has played extremely well at times, so it’s not a lack of anything we feel about Payton … but when he’s been called upon, obviously you’ve seen him in the last week or so, he’s been great. He’s a guy we’re confident in being ready, and Romeo the same way.”