Jaylen Brown finished with 0 assists largely because the Celtics weren't spacing the floor around him in Wednesday's loss vs the Clippers. 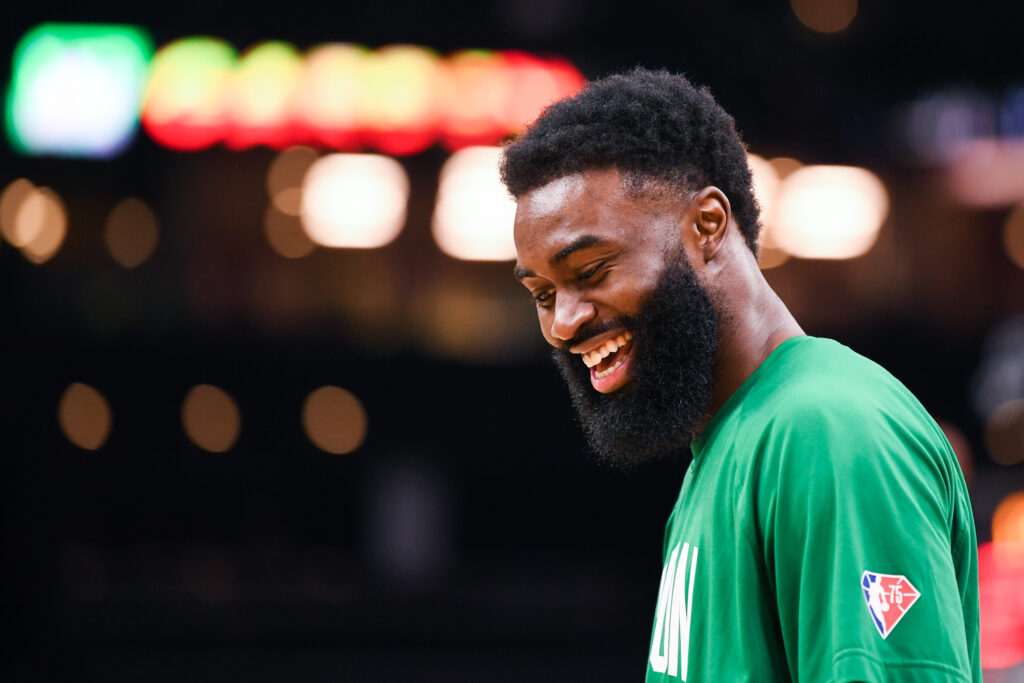 BOSTON, MA - DECEMBER 29: Jaylen Brown #7 of the Boston Celtics smiles during warmups prior to the start of the game against the Los Angeles Clippers at TD Garden on December 29, 2021 in Boston, Massachusetts. NOTE TO USER: User expressly acknowledges and agrees that, by downloading and or using this photograph, User is consenting to the terms and conditions of the Getty Images License Agreement. (Photo by Kathryn Riley/Getty Images)
Share
Facebook Twitter Email

Jaylen Brown had a disastrous showing Monday in Minnesota, turning the ball over six times. Ime Udoka and he met for 45 minutes before the game, highlighting film while drilling personnel. Udoka is spending more individual time with players recently, as the team grows limited in what they can do collectively between COVID absences and protocol.

That may not be the recipe for gluing this group together on the floor.

Udoka continues to stress getting off the ball, while targeting matchups. He wants Brown and Jayson Tatum to trust their teammates, and Brown balanced both during Wednesday’s 91-82 loss to the Clippers to an unsuccessful end. Brown scored 17 points in the first 14 minutes and stole two passes, running them back for dunks. He was driving into crowds of Clippers and fell to 1-for-13 from three by crunch time. Finishing with 0 assists, Brown dished eight potential ones.

“I thought we came out, we played with a lot of energy on both sides of the ball,” Brown said. “We held them to 90 points, we had a lot of open looks tonight, myself included. They didn’t go down for whatever reason, but I thought that our energy and fight was there, but it didn’t result in a win.”

The story of the game will become Brown’s 36 shots over 39 minutes paired 0 assists, a mark last achieved by Antoine Walker. Boston’s 4-for-42 three-point shooting will paint a picture that the Celtics didn’t know when to stop chucking.

Both of those stand as valid frustrations. Brown played another loose game as a facilitator, as did Payton Pritchard. The Celtics didn’t know when to stop launching, but Brown moved the ball throughout.

That underscores how difficult the Celtics have made offense for both their stars and younger players. Brown and Pritchard became the last line of facilitation during this week’s games with Dennis Schröder, Marcus Smart and Tatum out. Joe Johnson sat on the bench as the only hardship exemption player remaining, the Celtics never signing a point guard this past month when more than half the roster entered COVID protocols. Another veteran long out of the game, C.J. Miles, entered protocols himself this week.

Could Johnson even play? It seemed uncertain.

That’s a small thing compared to the lack of shooting personnel, which many have harped on all year. Richardson helped some returning as a ball hander and off-ball scorer, but proved a solution for neither. Romeo Langford has struggled immensely to hit threes lately (3 for his last 21). Grant Williams, the team’s best off-ball shooter, played 20 minutes, presumably over defensive issues.

Sam Hauser played six minutes late, living and dying on three attempts from deep. Pritchard, who has helped recently (entered 9 of his last 22 from three), had a bad game (0-for-5) and Udoka couldn’t seem to wait to get away from him when his fellow veteran guards return.

“With Marcus and Dennis out, we didn’t have a lot of backup production there,” Udoka said pre-game. “We tried Romeo at times, had it in Jaylen’s hands quite a bit, but we do got capable guys. Josh has been a combo guard who did some in Philadelphia, and is capable of taking some of those minutes off. So that’ll help as far as keeping Payton’s down a little bit, we got Brodric Thomas, who’s a young combo guard that we can lean on there, and then ultimately we can let Al handle and bring it up and initiate stuff … don’t love the 44-minute deal, Payton is one guy that can shoulder that … it went that way, but that’s obviously a higher number than we’d like.”

The Clippers packed the paint and the Celtics settled. It’s becoming concerning that the team is diving into those old bad habits. The Celtics twice set historically bad marks from deep in this young season.

They continue to isolate and solve challenges on their own, and in a game they could’ve grasped, within two possessions with under three minutes left, nobody emerged to calm the entire operation down. That’s something no trade or roster shakeup is certain to change. The team needs to solidify itself, together, in difficult moments.

Would a pure point guard have helped? A veteran? Turning toward individual efforts has become the defining trait for a team with a 1-9 record in games decided by five points or fewer. Brown tried his best to fill both roles in the loss, only occasionally going into full ISO mode, hitting open shooters repeatedly and encouraging them to stay aggressive. He probably needed to attack downhill more himself.

Udoka produced a good defensive effort on paper (Clippers shot 40.9%), but one filled with cracks like breakdowns that gave Luke Kennard open looks from three and Eric Bledsoe an open run in transition and in the pick-and-roll. Brown himself allowed Terance Mann a wide open corner three in transition.

Boston being unable to rebound Marcus Morris’ second free throw late led to a second consecutive offensive rebound, and a Bledsoe three that effectively decided the game. Udoka hindered another possible step forward for the offense to dig in with defensive lineups, only to see that side of the ball exposed too. He even went back to double big in crunch time.

In the fourth quarter, the Celtics rank bottom-five in defense and make Brown and the youth’s development difficult given the lack of shooting and movement they’ve surrounded their playmakers with. With an offense aiming to drive-and-kick after getting downhill, they’re meeting crowded paints and hitting shooters who keep missing.

They could use more diverse play-calling. Losing Robert Williams III to a late face plant didn’t help, but they didn’t have him keyed into the game plan prior outside of his offensive rebounding. The Celtics rank bottom-10 in shots within five feet.

Brown had 0 assists because Boston shot 20% below its expected effective field goal percentage. It marked one of their poorest shooting nights ever and the worst high-volume catch-and-shoot performance on record.

An extreme anomaly? Sure, but these disastrous circumstances late in games keep afflicting the franchise. They’re down players, and so were the Clippers. We’ve known all along they don’t have shooting, and what little personnel they have rarely plays, and the Celtics have now lost 8-of-11. The blame game matters little.

Boston had goals this year, winning and developing. Making Brown and Pritchard playmakers was part of that plan. They didn’t have the tools to become that on Wednesday, and like Monday largely seemed set up to fail even if they didn’t rise to the occasion. Losing anyway makes that lack of development worse.

“Just try to take the pressure off as much as I possibly can,” Brown said. “Just let them know it’s just basketball, despite what is going on outside of it. Just come out and play. Nobody is expecting you to come out and hit home runs, we just got to hit singles … also talking to myself and making the game easy … I guess we’re due for a lot of makes. We’re wide open, we’ve got to keep shooting it with confidence. I keep telling my guys that.”