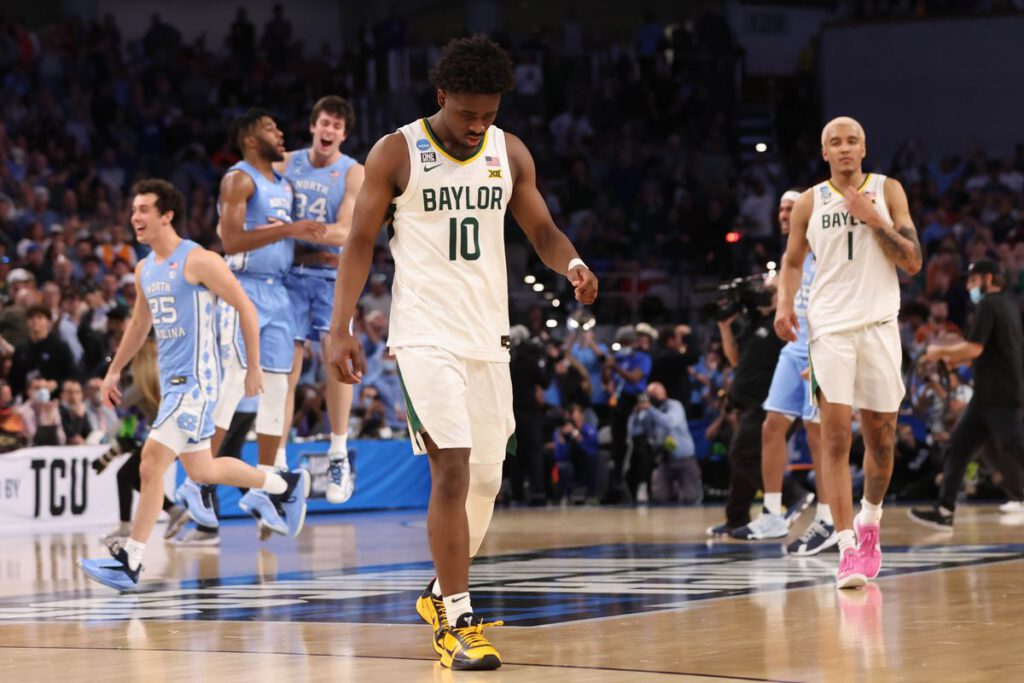 Baylor rallied from 25 points behind to send their game with North Carolina to overtime, but could not finish the comeback in the extra period (Courtesy of Kevin Jairaj-USA TODAY Sports).
Share
Facebook Twitter Email

Another wild day of NCAA tournament action that featured several big time upsets, the dethroning of a champ (Baylor) and a sweet 16 berth for the top ranked and only remaining New England team in the tourney.

How Sweet it is

For the first time in 25 years, the Providence Friars are in the Sweet 16.

The 28-point victory marked as a complete team performance seen so far in the NCAA Tournament. Five Friars notched double digit scoring in the blowout win, including forward Noah Horchler who led the team with 16 points and 14 rebounds. Providence was clinical from the field, scoring 51.9 percent from the field, and a season-best 54.5 percent from downtown.

The Friars put the first seven points on the board and never gave the Spiders a chance to cause a stir. Richmond caught No. 5 Iowa by surprise in the first round with an upset win on Thursday, but could not bring the same intensity against Providence. The Spiders finished at just 39.6 percent shooting, and drained just 38.1 percent of their free throws.

Providence will face Kansas in the Sweet 16 on Friday.

Down go the champs.

The No. 1 seeded Baylor Bears were eliminated from the NCAA Tournament in just the second round on Saturday. The Bears fell to the No. 8 seeded North Carolina Tar Heels in overtime, 91-86.

The Bears spent the entire second half rallying from behind, trailing by as much as 25 points with 10:08 remaining. But the ejection of UNC forward Brady Manek turned the game upside down. Manek scored 26 points before a flagrant-2 foul was called on him, and nailed one of his four 3-pointers to claim their largest lead of the game prior to being tossed.

Immediately afterwards, Baylor deployed the full-court press to claw back into the contest. The Bears forced 21 turnovers, and scored 25 points off of them. Baylor came to life, and fought to erase the deficit in its entirety by the end of the regulation. James Akinjo completed the comeback on a three-point play with 15 seconds to go.

BAYLOR STORMS BACK FROM 25 DOWN TO FORCE OT! pic.twitter.com/IEOeQ4URBk

Baylor dug deep to fight back in the final ten minutes of regulation, but had nothing left in the tank in overtime. North Carolina never trailed in the extra period, outscoring Baylor 13-6.

The reigning champions entered the tournament reeling from a novel case of the injury bug. Top scorer LJ Cryer was ruled out indefinitely with a foot injury, and Big 12 Defensive Player of the Year Jonathan Tchamwa Tchatchuoa suffered a season-ending leg injury last month. The top-seeded Bears could not overcome their key injuries and saw their season come to an early end.

North Carolina moves on to face either UCLA or Saint Mary’s in the Sweet 16.

Two days after stunning Kentucky and becoming only they 10th number 15 seed to ever win a tournament game, St Peters is at it again.  The Peacocks took down 7th seeded Murray State 70-60 to advance to the sweet 16.

St Peters led this game wire to wire. They will take on the winner of Sunday’s game between Texas and Purdue awaits.

With the win, St. Peter’s becomes the third No. 15 seed to ever advance to the tournament’s second weekend.

The Wolverines trailed by six points with under eight minutes to go, and by four with 1:38 remaining. They closed out the game on a 22-8 run. Center Hunter Dickinson and guard Eli Brooks combined to score 50 points for the Wolverines, spearheading the late comeback.

Michigan rallied by locking down Tennessee’s scorers. The Volunteers put just eight points on the scoreboard in the final 8:27, and were held to 2-of-17 from behind the arc on the night. Dickinson secured the Michigan win after blocking Kennedy Chandler’s layup with 13 seconds to go, and Michigan up by six.

Their victory over Tennessee marks Michigan’s first consecutive wins since Feb. 10. The Wolverines are in the Sweet 16 for the fifth consecutive year.

The Wolverines will face the winner of Villanova and Ohio State’s game tomorrow.