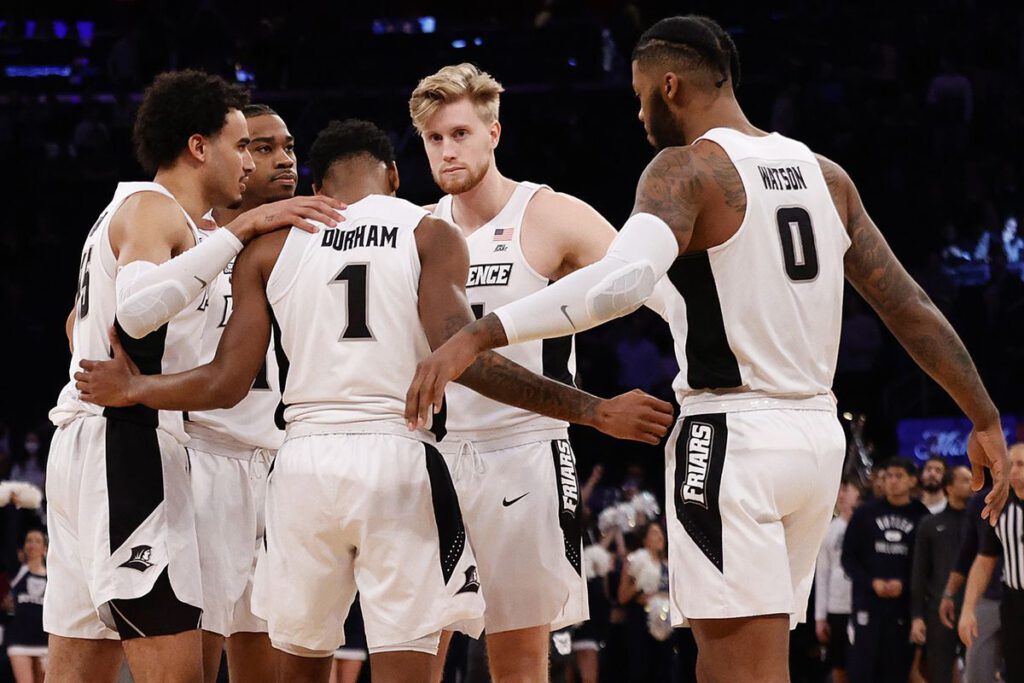 The Friars ran through their Big East schedule due to their ability to stop opposing offenses in their tracks. That remained true against the nation’s second leading scoring team— 13-seed South Dakota State and its 86.7 points per game. Providence held the Cinderella hopefuls to 23 points in the first half and won the matchup 66-57 after a late push from their opponents.

A critical foul by San Diego State’s Douglas Wilson on a closeout with 29 seconds remaining in the game proved to be the matchup’s pivotal moment. Jared Bynum made all three of his free throws, stretching the Firar lead to six and putting the game out of reach.

South Dakota State went into the halftime locker room after their lowest scoring half of the year. Instead of getting pulled into a fast paced shootout, the preferred tempo of the Jackrabbits, the Friars were able to weather the frenetic pace early on and settle into the play style that helped the team win 25 games this year.

“We talked to the players about our culture and I thought this was a culture game versus style and I thought our players were resilient today,” Providence Coach Ed Cooley said after the game. “They did a great job. It also tells you that the strength of the Big East and the styles of play we have to play against.”

This win is bounced back from their disappointing Big East tournament loss to hot-shooting Creighton. Cooley saw elements of both the Blue Jays and Villanova in the Jackrabbits, and Providence was able to take those lessons into Thursday’s matchup.

“We hear the noise that everybody says, but we can’t let that rattle us,” Durham said. “We knew what we were capable of, we knew coming in we’re going to have an edge, a fire, and a chip on our shoulder. And we just came out and played our game, and we just proved the whole world wrong.”

Providence moves on to face the 12th-seeded University of Richmond Saturday.

The fifth-seeded University of Connecticut Huskies are one-and-done in the tournament following a microwave-hot shooting performance from New Mexico’s junior guard Teddy Allen.

Allen has starred for the Aggies all year, averaging 19.3 points enroute to the Western Athletic Conference Championship. Allen surpassed that total Thursday night, scorching the nets in Buffalo for 37 points in the 70-63 win by the 12th seed. New Mexico State shot 64.7 percent from three as a team, and Allen hit all 13 of his free throws. UConn ends its season 23-10 with a second-consecutive first-round exit. RJ Cole led the Huskies with 20 points and was the only Connecticut athlete to score over 10.

St. Peter’s is officially the 2022 March Madness Cinderella team. The Peacocks defeated No. 2-seed Kentucky 85-79 in an overtime thriller.

Doug Edert came off the bench to score 20 points for St. Peter’s, including the game-tying jumper with 24 seconds left in regulation. Poor free throw shooting sunk the Wildcats down the stretch, as they missed five shots from the foul line in the extra period. Likely national Player of the Year winner Oscar Tshiebwe scored 30 points and grabbed 16 rebounds for Kentucky, but it was not enough to escape the upset. Daryl Banks III led the Peacocks with 27 points and hit two free throws to put them ahead for good with 1:24 left in overtime.

The second fifth-seeded squad to fall during Thursday’s opening round were the  Iowa Hawkeyes. Led by All-American forward Keegan Murray, Iowa, coming off a Big-10 tournament championship run, was regarded as one of the hottest teams in the country.

That was before they faced the Spiders and senior Jacob Gilyard. The star point guard is the NCAA’s all-time leader in steals, and he helped shut down the high-octane Hawkeye attack. Iowa guard Jordan Bohannon averaged 11 points this season, but the Spiders held him to 6 on 2-8 shooting.

This is Richmond's 8th win as a 12-seed or lower in the Round of 64 or later. No other team has more than four (Ohio, Oregon, Tulsa).

The Spiders won 67-63 and now have the chance to face Providence in the round of 32.

Can Gonzaga Finally Win an NCAA Championship in 2022-23?