Ime Udoka is no longer leaning on hoping shots fall. The Celtics know they need to fix their spacing, and Ben Simmons wouldn't help that at all. 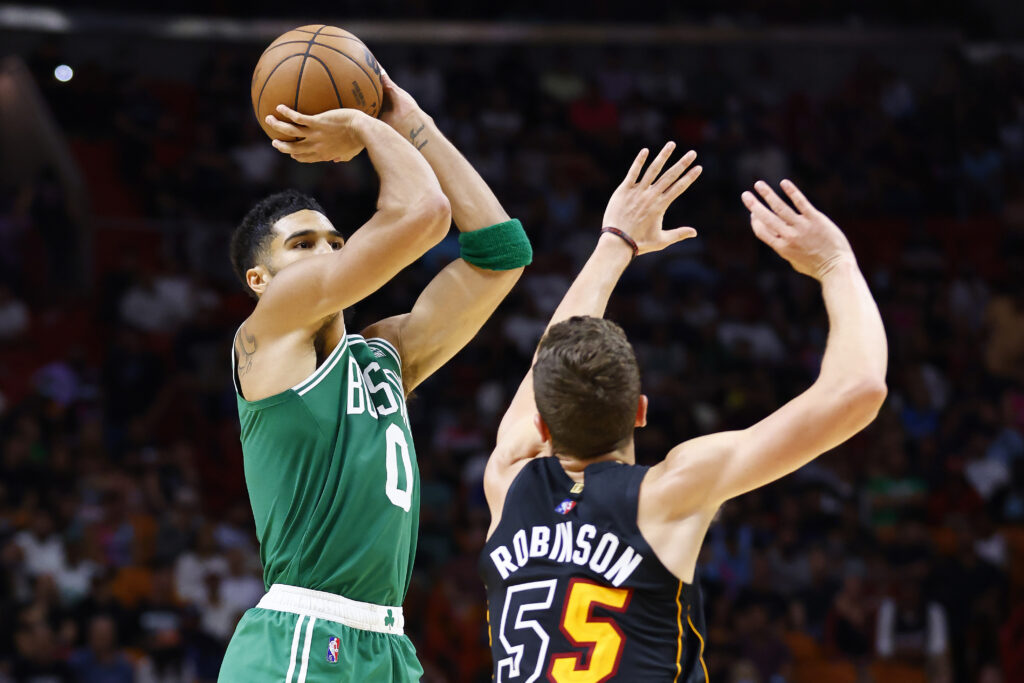 MIAMI, FLORIDA - NOVEMBER 04: Jayson Tatum #0 of the Boston Celtics shoots over Duncan Robinson #55 of the Miami Heat during the second half at FTX Arena on November 04, 2021 in Miami, Florida. NOTE TO USER: User expressly acknowledges and agrees that, by downloading and or using this photograph, User is consenting to the terms and conditions of the Getty Images License Agreement. (Photo by Michael Reaves/Getty Images)
Share
Facebook Twitter Email

Udoka’s goals played out during the opening weeks of his tenure to varying degrees. The shooting didn’t follow, despite hopes for a Josh Richardson resurgence, Marcus Smart returning to his career average and Al Horford spacing the floor at the four. The Celtics shot 33% from three through 10 games, in line with the collective career average of the roster, and ranking 20th in the NBA. Quality looks would fall eventually, Udoka repeated through the droughts. Now, he’s not sure.

It could get worse first. Jabari Parker, Dennis Schröder and Grant Williams all provided an early three-point boost for the Celtics, shooting above their past averages. Schröder began the season 40% through his first five games on 25 attempts from deep. Now, Jayson Tatum, Aaron Nesmith, Payton Pritchard, Horford, Schröder, Smart and Richardson all average below their career marks from deep. Jaylen Brown — shooting 39.7% on threes — will be missed most as one of Boston’s few reliable shooters these next 1-2 weeks recovering from a hamstring injury.

That made Monday’s big NBA rumor, via Shams Charania, that the Celtics and 76ers kicked around a Ben Simmons deal that would require Brown’s involvement all the more unrealistic. Introducing Simmons, a 5-for-34 career, notoriously unwilling three-point shooter, to a roster already filled with big men and non-spacers, in exchange for its most reliable marksman, would result in a worse version of the 2020 Sixers. Remember what Horford and Simmons looked like together last time?

A protest would form outside Auerbach. Philly would throw a preemptive championship parade.

The Celtics enjoy their defensive personnel already and a $33-million luxury passer won’t help their offense’s fatal flaw. They can’t finish shots. Boston created 23.9 open (6+ feet of space) shots per game to rank fourth in the NBA. The Celts’ 37.7% mark on those attempts lagged at 27th, ahead of only Washington, Milwaukee and Detroit.

Sharpening Boston’s new defensive scheme became Udoka’s emphasis as the team struggled on that end early. After the defense emerged to top-10 status during the team’s 2-1 road trip, this week’s three days off allowed for an offensive assessment.

“We encouraged the downhill drives and a lot of those have led to those open shots,” Udoka said to CLNS. “We talk about playing fast, making quick decisions. You know, 0.5 is what we mention, just catch it, shoot it, pull it or pass it, and they’ve done that. To your point, the quality of shots are great, the percentages haven’t been great. That’s a little bit of the tale of two halves in (the Dallas) game, we were 2-of-17 in the first half and 7-for-14 second half. So we got the same looks, guys knocked them down, but we’re going to encourage them to be aggressive, take those shots.”

Droughts plagued Boston’s starts in Miami and Dallas. The Celtics missed five consecutive jump shots to open the their win over the Heat while holding Miami to 0-for-6 in the opening minutes. A similar 1-for-10 stretch on jumpers began the team’s loss in Dallas.

Udoka advocates other areas of attack like post-ups and allows players like Richardson to lean into comfortable mid-range looks, a slight divergence from Stevens. The Celtics shifted away from the three against the Mavericks, attacking the paint. Boston took 7 of its next 11 shots inside the arc after the sluggish shooting start, finding Tatum for short-range looks that drove his second best night of the season. As the season progresses, his shots will fall.

The hope for those players came from elsewhere on the floor Saturday, the offense showing admirable flexibility. Horford navigated into the lane to produce a 14-point night when he couldn’t get a three to fall. Smart generated four free throws and the NBA’s last two minute report showed his final drive against Kristaps Porzingis resulted in an uncalled foul.

Schröder comfortably attacked the rim and shoots 62.5% there this season. Richardson leaned on shots inside the arc too, producing a 6-for-12 performance in Dallas, and finished 13-for-25 on mid-rangers (52%), his most-used shot. Even Nesmith put the ball on the floor for a missed layup that got put back by Robert Williams III.

“If I go into a pick-and-roll with somebody,” Williams III said of his role in the spacing. “And I roll down the lane quick, I may not get a lob, but if I don’t get a lob, that mean a man from the corner pulled in to help, so there’s somebody open in the corner. Just creating a threat toward the rim any way I can helps sink the defense in.”

Boston’s facilitators finally helped Williams III break out for a 7-for-8 performance against the Mavs. The Celtics, ranking as low as any in shots at the rim to begin the year, rose to 17th last week with 25.8 shots per game at the rim. Their 10th-ranked efficiency inside five feet this season offers some hope from the forgotten most efficient location on the floor next to the beloved three pointer.

The Celtics rank 22nd in offense and float around .500 basketball for now. They may need to lean into lineups featuring their younger cast to introduce more reliable shooting and score enough points. Pritchard hit 34.4% of his open threes last year, Nesmith 45.3%, and Romeo Langford shot over 50% from three these past two years when open — albeit on five attempts.

Nesmith and Pritchard’s higher-volume work, along with Grant’s 11-for-26 (42.3%) start from behind the arc, gives Udoka some options, though each carrying defensive limitations. Brown’s injury may now allow the head coach to overlook them in the spirit of experimentation.

Spacing topped Udoka’s list of concerns as he tries to revamp the Celtics’ corner three shooting. They ranked eighth in efficiency (45.5%) through four games, while attempting the second-most per game (12.3) in the league behind Utah (12.5). Schröder hit 40%, Grant 100% (4-for-4), Smart 36.4%, Pritchard 50%, Parker 66.7% and Langford 66.7% during that stretch, while Richardson split a pair of tries. Boston’s cutting cleared corners while collapses on Brown and Tatum allowed for wide open looks on drive-and-kick plays.

“We’re really emphasizing our spacing,” Udoka said. “And now, last six games, we’ve been one of the top teams getting to the basket … worked on some blitzing that teams have done with Jayson, with Jaylen being out … looked at the numbers after 10 games, (we) like where we’re heading. I think we’re overall fourth in assisted three-pointers. The percentage isn’t great, but the actual fact that we’re passing and finding guys there has been good.”

Smart, the Jays, Grant and Rob showed the most shooting promise of any group so far in 22 minutes, averaging 72.1 eFG% with an 139 offensive rating. Minus Brown, Schröder leading a unit with Richardson, Langford, Tatum and Horford showed some promise in eight minutes, as did Schröder, Smart, Tatum, Grant and Rob.

The shooting numbers overall appear bleak though, as this roster on paper just doesn’t have much personnel from three. Schröder’s 41.7% mark on open threes shows some promise, but the look of his release does not. He hit one three on six tries in the loss to Dallas.

Many teams have spacing baked into its core players, and don’t need to force lower rotation reserves into action for shooting like many want to see done with Nesmith. Limited spacing allows the paint to collapse on Tatum, likely obstructing everyone’s post-up stats and removing the easiest paths to efficient offense from Boston’s arsenal. Simmons wouldn’t help that.

“We’re really digging into the offensive side now,” Udoka said Monday. “See what fits us best, especially with Jaylen being out these next few games, what works for certain units and trying to shore that up.”