Manning: Marcus Smart Should Be as Accountable as Brown and Tatum

Marcus Smart called out Jaylen Brown and Jayson Tatum last week before making a massive mistake in Dallas on Saturday. 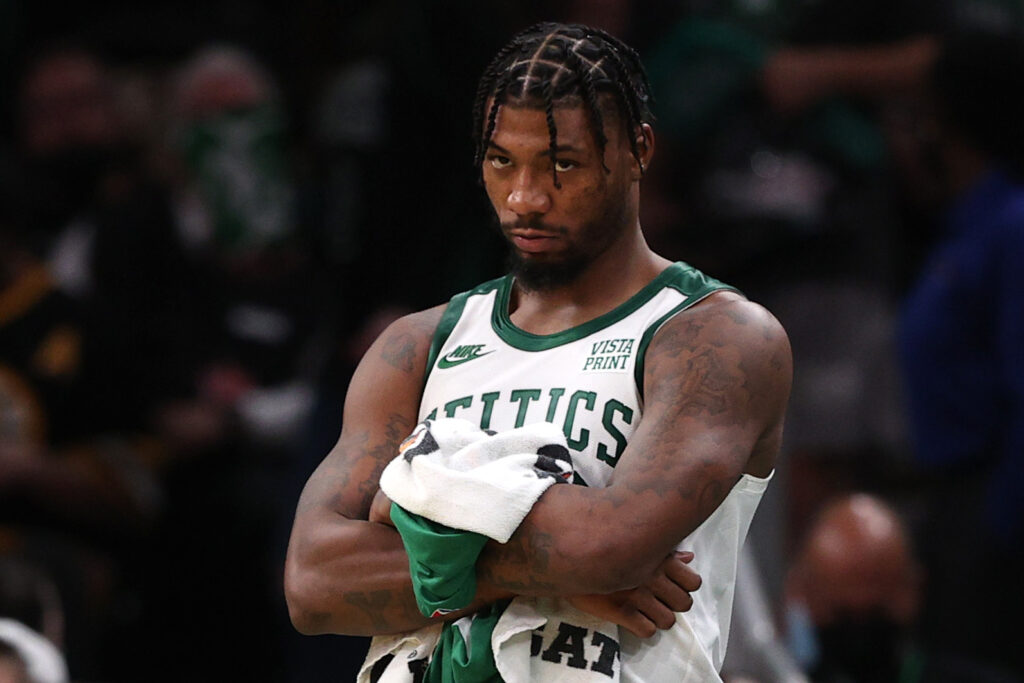 BOSTON, MASSACHUSETTS - OCTOBER 22: Marcus Smart #36 of the Boston Celtics looks on from the bench during the fourth quarter of the Celtics home opener against the Toronto Raptors at TD Garden on October 22, 2021 in Boston, Massachusetts. NOTE TO USER: User expressly acknowledges and agrees that, by downloading and or using this photograph, User is consenting to the terms and conditions of the Getty Images License Agreement. (Photo by Maddie Meyer/Getty Images)
Share
Facebook Twitter Email

Luka Doncic hit another iconic leaning game-winning triple in the aftermath of Smart’s take foul that cleared the shot clock and his path to the final shot. He stormed to the other side of the floor with both arms up as Smart and his teammates walked off the floor blank-faced, holding two timeouts in their pocket. The Celtics made multiple late mistakes, but two from the point guard carried extra weight in the outcome.

“There was no strategy,” Udoka said after. “It was not supposed to be a foul. A few of the guys asked me coming out of timeout, I let them know and just a mistake there, but that’s on me. I got to let everybody know and make sure they know. Obviously, 5-6 second differential, we want that last shot. So I gotta communicate that to everybody, so everybody knows.”

Jaylen Brown, Jayson Tatum and Udoka all took accountability for different moments during the Celtics’ rocky 4-6 start. Nobody criticized Smart for struggling through sickness and whatever else plagued him through the worst start since his rookie year. He’s improved since, while rocking the boat with his post-game commentary last Monday, before providing helpful two-way efforts in Miami and Dallas. He hit a late go-ahead three over the Mavs, then his foul and questionable final shot choices, combined with Tatum’s response to Smart’s criticism from a week ago, provided a chance to further reflect on what Smart said.

As accountable as Smart holds his teammates, does he allow for the same when he missteps? Smart recording 0 assists the night he called out the Jays for not passing marked one oversight. He only noted his slow shooting start, before rattling off ways he could help Boston if only he received a larger role. Smart got that chance, in the corner, with the ball in his hands on Saturday and tossed himself into Kristaps Porzingis seeking a foul.

Smart didn’t address his closing decisions post-game thanks to the wonders of the Zoom era of sports reporting. Still, he appeared to defend his foul on Doncic to Udoka on the floor, who explained something back with a hand over his mouth. It rang familiar to a moment last year against New Orleans, when Smart tossed a jump ball the Celtics won at mid-court over the opposite basket, drawing ire from Kemba Walker before Robert Williams III needed to hold Smart back as he became agitated Walker challenged him.

“We talked about it,” Tatum said on Saturday. “Individually and had a team meeting I guess, but I know how to play basketball. I’ve been doing it for a long time and have been pretty successful at it. I’ve always made the right plays, I’m not perfect, I got things I can work on and I think that’s the good part about it. As young as I am and as good as people think I am, I have a lot to improve on, and I’ll be the first one to say that, but I’m always gonna play the game the right way, and the way I was taught and the way I’ve been playing my whole life. So that’s never gonna change.”

Tatum followed Brown, Udoka and Brad Stevens’ sentiments that Smart shouldn’t have taken his criticism of the Jays public. All including Smart improved into the 2-1 road trip, following the players-only meeting in Orlando, while Brown and Tatum both expressed the same desire to move on. Where’s that leave Smart though? Especially after Udoka affirmed Smart’s role in the offense after the point guard challenged it.

Dennis Schröder will likely remain in the starting lineup next to Smart until Brown returns from his hamstring injury, which could take over a week. Schröder and Smart thrived as a disruptive and playmaking duo to start this year through lineup turnover, but the minutes further dig into Smart’s ball time and shot total — and rightfully so. Schröder attacked Dallas head-on, opening lanes to the basket for Tatum and Williams III. He attacked Porzingis how Smart should’ve, splitting a pair of late drives at the big man more decisive than Smart’s off-balance takes.

“The pace is one thing that stands out (about Schröder),” Udoka said. “The way he pushes the ball, the game’s tempo changes when he comes in. We love that out of him, but also just a balance of scoring and being a playmaker for others. He can get to spots on the court that a lot of guys can’t get to, and so he honestly breaks their defense down and then usually makes the right read, whether he makes the shot or not. He’s taking the right shots and then he’s been very unselfish. Beside that, just his edge, his toughness … elevates the group as a whole.”

Schröder now receives 70.8 touches per game, second to only Tatum, with 10 more than Smart. The guard breaks Udoka’s 0.5 second decision rule often and he committed his own costly turnover in crunch time, but his advantages as point guard accentuated Tatum and helped Williams III post one of his best performances of the season. Tatum could comfortably dump the ball off to Schröder, who could take advantage of the weak side space that the Dallas defense’s pressure on Tatum left for others and get downhill.

Teammates shoot 40% following Schröder’s passes, the best mark among Boston’s regular facilitators, evident in his team-best 6.0 assists per game (6.8 per 36). He quietly became the Celtics’ point guard early this year.

That leaves Smart on the perimeter, where he shot only five times against Dallas. There are two sides to the ball though, and Smart’s defense vastly exceeds Schröder abilities on that end, holding Doncic to six points in 25 possessions head-to-head. Smart constantly crashed to the floor, tipped the ball away from the Mavs star out-of-bounds moments before his game-winner and snuck behind Jalen Brunson to poke the ball away when he snuck too close to his air space lining up Williams III on a switch above the arc.

Schröder and Smart’s shooting complements each other horribly, likely representing the least three-point shooting in a NBA back court right now, yet they manage to outscore opponents by 8.4 points per 100 possessions together. It should remain Boston’s starting back court even when Brown returns, but can Smart accept the reduced role on offense and focus on anchoring the Celtics’ defense? On Saturday, he did until late.

The Celtics like Smart, and his value to them likely outsizes what other teams would offer to trade for him. He’s trade-ineligible until January anyway, and a four-year, $77-million extension locks him in with the Jays for years to come barring an unforeseen major shakeup. They couldn’t afford to watch him leave for nothing this offseason like Kyrie Irving, Al Horford and Gordon Hayward did. Those departures set up the friction we’ve seen among Boston’s pillars as much as anything else. Smart should be running second units on a great team. Smart’s being forced to balance more responsibilities on this roster though, and needs to remain as accountable as he held the Jays last week.

“There’s certain things. I wouldn’t come out here and tell you about our game plan, specifically,” Tatum said. “I think the moral of it is it happened, and you can’t change it. We’re still a team, we’re still figuring it out, we’re still trying to win games. It’s not like I’m upset or sad about whatever. It happened. I’m a big believer of whatever happened happened, you can’t change it. Let’s move on, let’s try to figure it out.”

That means backing his coach’s game plans, ideas and even staying within the team’s messaging strategy. The Celtics have no problem with his aggressiveness, and Smart himself never apologized for shooting when that emerged as a topic early last season. They need everything else from the guard in exchange for that belief, including a willingness to take a back seat to Schröder, remaining locked-in on defense and admitting his own faults as the Jays have done.

This shouldn’t feel like a group walking on thin ice around one player, and if it that’s the root of discontent in Boston, then the extension could end up becoming a mistake, even considering its contract-matching merits.

“He knows what his role is,” Udoka said in training camp. “And I want him to be an extension of us coaches on the floor.”