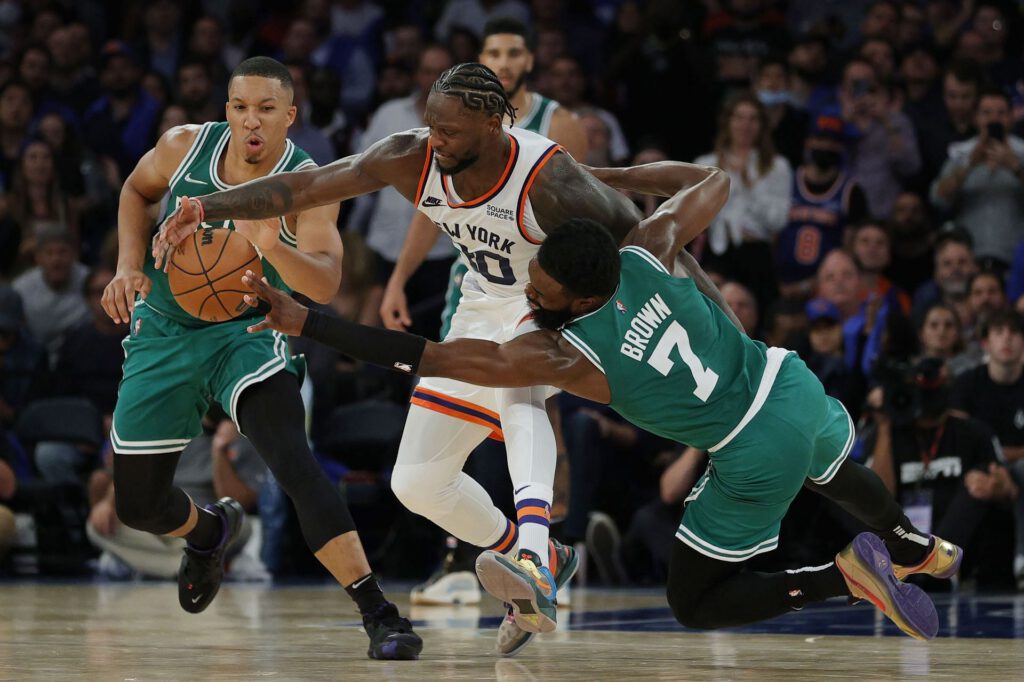 The Boston Celtics (18-20, 18-18-2 ATS) face-off with the New York Knicks (18-20, 17-21 ATS) tonight on their second night of a back-to-back. The C’s lost a heartbreaker Wednesday night to the San Antonio Spurs. Meanwhile, the Knicks beat the Pacers in their last contest and have won four of their last six.

According to the online sports book Betonline.ag, the Boston Celtics are 2-point favorites:

Payton Pritchard remains the only Celtics player listed as out for tonight’s contest. He entered the league’s health and safety protocols the other day. Brodric Thomas is listed as day-to-day as he continues to deal with lower back pain.

New York has four players listed on their injury report. Derrick Rose just recently underwent surgery on his right ankle, so he won’t be active for the next few weeks. Both Luka Samanic (foot) and Kemba Walker (knee) are also set to miss the game. Lastly, Nerlens Noel is questionable for conditioning reasons.

Boston’s loss to the Spurs was a case of lackluster late-game execution. They only scored 20 points in the fourth quarter, and their second-hald shooting percentages tanked by nearly 10 percent compared to the first. Still, though, they had a chance at the very end of the game. Unfortunately, Jaylen Brown just couldn’t get the game-tying layup to fall in the final seconds. San Antonio gave Boston chance after chance, and the Celtics’ shots just weren’t falling.

Jayson Tatum made his return to action last night, too. However, it wasn’t as successful as one might have hoped. Tatum scored 19 points but shot 6-of-20 from the field and 1-of-6 from deep. It was instead Brown who carried the load on offense, pouring in 30 points. That being said, when the fourth quarter came around, everyone went cold. Dennis Schroder seemed to be the only Celtic generating any offense.

The game wasn’t all bad, though. Despite the stagnant offense in the fourth, Boston played great defense throughout the contest. San Antonio was making some tough looks, but the C’s were fairly consistent on D. There were certainly some lapses on that end, but overall, holding an opponent under 100 points is a success. Marcus Smart also deserves a lot of credit. In addition to being a great playmaker, he made hustle play after hustle play down the stretch of the game.

The Knicks have faced similar struggles to the Celtics this season. They are significantly underperforming compared to expectations set before the season. A big part of it has been a dip in the two main success stories of last year – defense and three-point shooting. After being a top defensive team last year, the Knicks rank only 19th in defensive rating this season (109.4). They also went from being the third-best three-point shooting team to only 13th this year (35.3 percent).

Julius Randle and RJ Barrett have both taken steps back this season. Randle was making a ton of tough shots last year, but those same looks aren’t falling for him anymore. His shooting numbers are way down. His field goal percentage is down around three percent, while his percentage from deep is down around eight. Barrett is experiencing almost identical drop-offs in both categories. Combine that with the team’s lackluster defense, and New York is trending downwards.

However, the story of the season for New York has been Evan Fournier and Walker. They poached both players from the Celtics (kind of) this past offseason. Despite this, neither has lived up to expectations in the Big Apple just yet. Fournier’s shooting splits look alright at first glance, but he’s been wildly inconsistent. The same can be said for Walker. Both guys are shooting the ball somewhat efficiently as a whole, but it’s difficult to know how much the team will get from them on any given night.

After their crushing defeat against the Spurs, Boston needs to focus on their offense. Specifically, they can’t revert back to isolation-heavy ball at the end of games. Once they abandon the great ball movement that helped their offense thrive, then all that hard work goes down the drain. Playing through Smart or, as Brown suggested, playing through Al Horford and Robert Williams, should be the plan of attack. Not just for the first two quarters, but throughout the entire game.

Another factor that would help the C’s out would be a bounce-back game from Tatum. He said that he didn’t necessarily feel like himself against San Antonio. That being said, he also said he felt a million times better this time coming back than he did when he returned from COVID last year. Madison Square Garden is the brightest of bright lights. If there were ever a time for Tatum to put on a show, it’d be tonight. Boston could use the boost, and so could Tatum.

Lastly, as repetitive as it may sound, the Celtics need to crash the glass. While it wasn’t their ultimate downfall against the Spurs, they still gave up too many crucial offensive boards. They lost the rebound battle 48-41. Now they’re taking on a team with more physical big men in Mitchell Robinson and Taj Gibson. Boston needs to crash the glass as a team. They can’t just depend on Horford and Williams. Everyone needs to keep an eye out for stray boards.

The Knicks may be struggling, but they’ve still given Boston some trouble this season. They have a lot of guys that can get hot and stay hot throughout the game. Expect this one to be super close throughout.